“I’m not going to the Tonys this year,” sighed two-time Tony-winner Bebe Neuwirth at the opening premiere of Sir Kenneth Branagh’s stunning production of Macbeth at the Park Avenue Armory.

“Will you go to the parties? What about the Carlyle?” Shindigger asked with surprise, as Kate Beckinsale, Willem Dafoe and Matt Bomer swapped glasses of Dom Pérignon for salads of compressed watermelon and roasted beets.

“Oh! Is that where they’re doing it?” Ms. Neuwirth replied, her curiosity possibly piqued.

“I’m out of town this weekend.”

Her loss. That Sunday, luxury watchmaker Audemars Piguet (an official Tonys sponsor) invited Shindigger to the dress rehearsal for the whole shebang, where we got a slick preview of what host Hugh Jackman had to offer. (Plenty of hunky charisma, but not even close to the dynamism of former host Neil Patrick Harris.)

A few hours later we changed into our Etro tuxedo and Eric Javits top hat to witness the crowds and talent as they traipsed down Radio City Music Hall’s red carpet. Shindigger’s one goal that night was to ensure that once the winners had been crowned, we would stumble only into the crème de la crème of celebrations, with the hopes of witnessing outlandish acts of revelry.

“This is the gay Super Bowl!” bellowed Rosie O’Donnell, who was bestowed with an Isabelle Stevenson Award.

Mr. Burtka, who sported a handsome Tom Ford smoking jacket, was one of many magnificently dressed men who shined in a variety of splashy blazers and tuxedos.

“I can’t move into a house with 3-year-old kids without things put away; the kids really miss their other dad,” he admitted, knowing that someday things would calm down. Meanwhile, though, the actor-turned-chef had bigger fish to fry.

“Don’t fuck up!” Mr. Burtka told us, recalling his words of advice to his partner, who was up for the evening’s biggest musical acting accolade. “It’s such a different experience for us, because he’s not hosting. It’s thrilling, but I’m way more nervous for him.”

“If he does win, where will you party?” Shindigger said, cutting to the chase.

“There’s a Hedwig party, but I’m not even sure where it is,” he confessed. “I think it’s a place downtown.”

Continuing the trend of impeccably garbed men was Bryan Cranston, up for the Best Actor in a Play Prize.

“What are you wearing?” we inquired.

“It’s Prada, and my wife’s wearing Valentino,” he specified.

“How will you celebrate tonight if you win?” Shindigger nudged.

“By drinking Champagne out of my wife’s shoes!” he laughed, before being shuffled into the theater.

“Gladys Knight just sashayed by!” Shindigger yelled to Wayne Brady, killing it in a Moschino suit. “Did you talk to her?” we questioned, knowing that later that week he would once again host the Apollo Theater 80th Anniversary Bash, where Ms. Knight would perform alongside Natalie Cole and the Isley Brothers.

“I’m surrounded by the most talent anywhere,” Mr. Brady gushed before Shindigger pestered him about parties.

“I’ll go to the official one at the Plaza, and then I’ll have to go to bed, because I’m performing at the Apollo,” Mr. Brady acquiesced.

As the awards got underway, there were few surprises. A Gentlemen’s Guide to Murder, A Raisin in the Sun, All the Way and Twelfth Night all received the bulk of top nods. “It feels absolutely amazing!” Aladdin’s James Monroe Iglehart extolled to Shindigger after receiving the Tony for Best Actor in a Featured Role in a Musical. He had no intention of partying, though. “My wife and I are going to McDonald’s,” he admitted to our astonishment. “It’s something we do. It keeps us humble; it keeps us grounded. We don’t go to some fancy restaurant, we take our Tony, we take our tux, we take our nice dress, we get in the car, we get a Big Mac and fries and then go back to the house and kick it with our cats. It let’s us know this is real life.”

Lena Hall, who was simply dumbfounded after being honored for her triumphant turn as transgendered Yitzhak in the revival of Hedwig and the Angry Inch, explained how she had prepared for the role: “I watched men walk around and categorized them by their walk, from the shuffle to dick first,” she disclosed giddily, before clarifying that she’d chosen the shuffle for her character.

“Working on the stage on any level is where an actor starts,” reasoned Mr. Cranston after he collected his hardware. “It is the purest form. You can feel the audience and effect emotional change. It’s such an empowering feeling; it’s like a drug. It’s as strong as blue crystal meth!”

Beautiful’s best actress winner, Jessie Mueller, was more than ready for festivities to begin as she answered questions beside her idol, Carole King. “We have a Beautiful party at Bobby Vans,” she chirped. “I think our publicist is having another party, I’m not sure where. Maybe someone can put me in a car and get me there?”

“I’m just overwhelmed,” she told us later, splendid in her floral Escada gown. “I’m very lucky that I’m in a place in history where I don’t have to deal with racism and misogyny, [the way] Lena Horne, Bessie Smith and Billie Holiday had to. I have to be grateful and thankful to them!”

Mr. Harris expressed gratitude for getting to perform live on stage again and was overjoyed with his award or Hedwig.

“I did a lot of preparation. I stopped doing any type of upper body strength training, which I had previously been doing, because you never knew when you were going to be shirtless in that show,” the star detailed. In addition to liquid dieting, hotbox yoga, kickboxing and walking around in heels, he sought a variety of sources to train. “I had some drag queen friends who gave some tips. I didn’t have to tuck with tape,” he laughed.

It was well after midnight when it was finally all over, and we were ready to take Alan Cumming’s advice: “Get really messy at the after parties if you didn’t win.”

It began harmlessly with a fiesta for After Midnight at the swanky Chelsea pad of Scott Sanders, with dazzling views of the Empire State Building. From there we went to the Red Eye Grill, where Lady Day & Co. toasted success, before slithering to the Upper East Side for power publicist Rick Miramontez’s legendary and life-threatening bash at the Carlyle Hotel.

“We brought our dog, Maude. She’s a rescue dog from Staten Island,” Jefferson Mays, festooned in a campaign hat, cooed to Shindigger over Champagne in Bemelmans Bar as the likes of Zachary Quinto, Harvey Fierstein, Jackie Hoffman, Dulé Hill and Reeve Carney joined the black-tie fête. “I asked [Maude], ‘Did you ever think you’d be at the Carlyle for an after party?’ and she said, ‘No, not in a million years!’”

Shindigger would love to kiss and tell about our star-studded marathon of mischief at the Carlyle, which ended around 6 a.m. That actor stumbling around with the bohemian substance he wanted to share, that actress rummaging through a purse not her own …

“Everything was fun!” chuckled Clint Eastwood, the film’s director, recalling the previous evening’s blur. “I didn’t know too much of what I was doing at the Tonys, but it was real fun.” 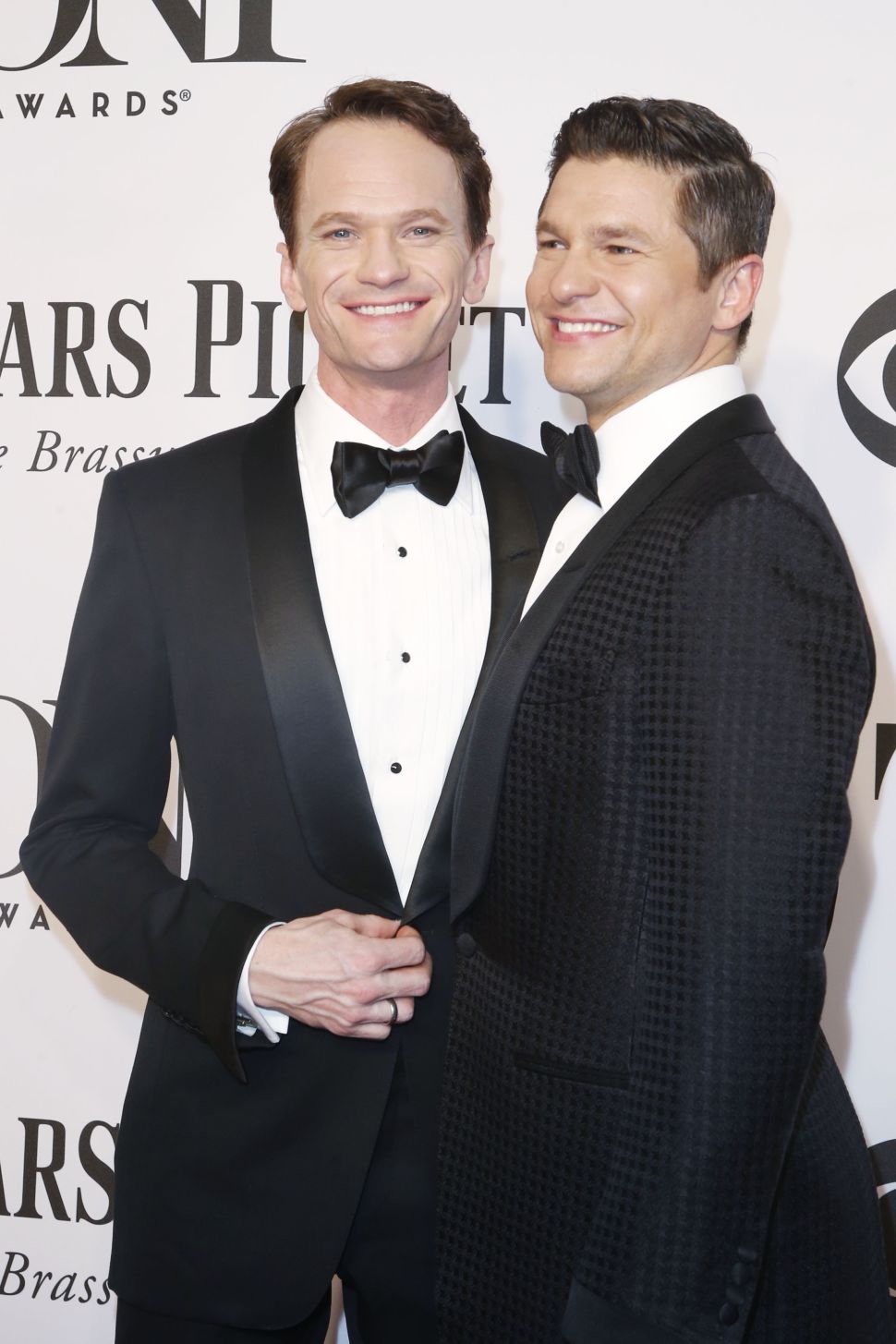