Transgender is a movement with a history, and throughout that history its citizens have identified with many names: transvestite, drag queen, drag king, crossdresser, transsexual, shemale, sissy…the list goes on. Twenty years ago, when I created the world’s first crossdressing academy, Miss Vera’s Finishing School for Boys Who Want To Be Girls, the word transgender was relatively new to the lexicon. Now it is the accepted umbrella term that covers a vast spectrum.

Current portrayals of trans people in pop culture include Neil Patrick Harris in the Broadway show Hedwig and the Angry Inch (a role which recently won him a Tony) and Laverne Cox as Sophia Burset in the Netflix series Orange Is The New Black. Bruce Weber employed transgender men and women as models in an ad campaign for Barney’s. Redefining Realness, an autobiography by transwoman Janet Mock, is a New York Times bestseller. Miss Vera students modeled designer fashions in Candy, the first transversal style magazine.

Ms. Cox and Ms. Mock have become eloquent transgender spokespersons. Laverne Cox has stated, “Transgender people are taking charge of their narrative.” They learn to take an interviewer’s question and turn it around, so the answer they give is truly the information they want to convey. Interviewers are being called to task. Ms. Cox put Katie Couric in her place when she was asked about her body. Janet Mock educated Piers Morgan, and then others. This is a good thing. But there is still a tendency by the media to compartmentalize.

I was particularly concerned that with this focus on people who transition, a complex subject would be overly simplified. The segment of the transgender population that I know, the men who want to keep a foot in both worlds, might be erased from the picture, or worse, considered perverse. That is why I was excited to learn this world would be brought to light in Harvey Fierstein ‘s new play, Casa Valentina, based on a real life place that existed in NY’s Catskill Mountains in the 60’s, a house called Casa Susanna where men who lived heterosexual lives crossdressed as women and spent hours together in their own special sorority. How would the experience of crossdressers in those days compare with that of crossdressers today? Would they be anything like the people who have come to me from across the country and around the world? And just how heterosexual would these men be?

There’s a cultural war raging around transgender issues. It’s a war of word, generations and history, fueled by anger, frustration and ideas of political correctness. Certain words were considered by some to be dangerous, the operative one being offensive. RuPaul was called transphobic because of loyalty to the word tranny.

He really got in trouble with use of the term shemale in contests on RuPaul’s Drag Race. The term shemale is popular in pornography, where it describes an entire genre. Trans people talk about gender, not sex, but for trans people, just like everyone, sex is part of the story that needs to be held up to the light, not hidden away. Author Dan Savage, who created the “It Gets Better” campaign to boost the morale and even save lives of LGBT youth was glitterbombed for use of tranny. GLAAD, the GLBT media advocacy group, produced a stylebook of taboo terms and transvestite was deemed “derogatory.” There are those who believe policing language protects people; others argue that censorship erases history.

Some might even complain that I, as a bio woman aka ciswoman aka non – transgender woman, do not have a right to opine on these issues. Since I am the dean of the Academy, and set myself up as an authority, I see it as my duty. Besides, turning out crossdressed glamour girls, as well as transgender activists via my finishing school, my earlier career in adult media as a porn star and journalist gave me unique insight into cultures once hidden underground. I had testified for freedom of expression before a committee of the Senate judiciary in Washington, D.C. and was about to be awarded a doctorate in human sexuality. More recently, I’d had six wonderful years in a relationship and then marriage to the artist Stuart Cottingham, who was part of transgender community as an out, bisexual crossdresser. Stu died in 2013, but not before gifting me with even more insight into a world in which I was already considered an expert. I had credentials.

I made a date to see Casa Valentina with my friend, artist Mariette Pathy Allen, who among her many accomplishments is my academy’s dean of photography. Mariette is the Margaret Mead of the transgender movement. For over 40 years, she has interviewed and photographed transgender people. Her work, which includes three books, has helped diverse communities become a movement. Mariette’s first book was Transformations: Crossdressers and Those Who Love Them. She knows a wealth of modern transgender history and would be a terrific play-mate. Just prior to the date of the performance, I received a call from a freelance journalist who would be doing a radio piece about Casa Valentina. Would I like to join him and some of the members of Crossdressers International (CDI), the support and social group located in New York City, for an after-chat about the play to be included in his reportage? Excellent!

When the “Charlotte” character entered onstage and delivered her first line, Mariette whispered in my ear, “That’s the character based on Virginia Prince.” Like Virginia Prince, Charlotte is an activist who hopes to get the other self-made women of Casa to unite and form an organization for mutual protection and benefit. I immediately looked to see if Charlotte’s slip was showing. Whenever a drawing of Virginia Prince appeared in Drag, the magazine published by Lee Brewster, Drag’s art director Vicky West made sure Virginia’s slip hung below her frock. She was granted a kind of grudging respect.

Casa also acknowledges a wider trans movement: When the character Amy states she won’t join Charlotte’s expressly homophobic organization because parties thrown by homosexuals were the first places she found any kind of acceptance, it’s Lee’s Brewster’s parties she’s talking about. In the 60’s Lee Brewster, a gay man, hosted drag balls where everyone from headliners to closet cases could strut their stuff. Lee fought to change the laws in New York that prevented crossdressed performers from working in bars. He was an old-school performer who, when presenting in drag, always referred to himself as Mr. Lee. Eventually he founded Lee’s Mardi Gras, which he advertised as the transvestite boutique. It was a 5000-square-foot loft filled to the rafters with transformation essentials, and everyone shopped there until Lee died in 2000.

I doubt if today Lee would drop the word transvestite from the description of his store. To put the word out in the public realm was a statement of pride. RuPaul, too, has a strong positive history with the word tranny and is standing firm; but in San Francisco, TrannyShack founder Heklina recently announced the name will go, and she’ll rebrand in 2015.

As we left the theater, Mariette and I concurred we liked the play, though I had some reservations. The acting was terrific, and a lot of important issues, personal and political, were raised. I took particular note of a speech by John Cullum’s character, Terry, about the impression “petticoat punishment” had on his psyche. Almost every one of my students attests to some early experiences that left lasting imprints. The next morning, I am able to more clearly define the aspects that bothered me. The playbill synopsis described the characters in Casa as “heterosexual men whose favorite pastime is dressing and acting as women,” and this was the idea supported in the show’s press. So why were these characters so un-heterosexual? Where was the expression of joy in their lives as men, which I knew from my own marriage, and which for years I have seen and heard from my students, some of whom are accompanied by their wives and girlfriends? Are these men gay? A heavy emphasis is placed on Amy kissing the newbie Miranda and that she likes to kiss boys. A discussion between the character Gloria and Valentina, about flirting with guys in bars, rings true. A man who is crossdressed wants to turn on the whole world, but this doesn’t mean action will follow. Male attention and admiration is considered a sign of success. The line that separates different sexual orientations — homo, hetero, bi — can be blurry, especially when a seeming fantasy becomes reality.

There was one moment when I thought there might be some reference to heterosex. In it, Rita, Valentina’s wife is upset. “Someone needs a nap,” says Valentina. Are they using code words? Is the George within Valentina recognizing that his wife needs a roll in the hay? It would have been nice. But no, Rita’s concerns are simply being belittled. The characters in the play all seem to want to transition. Maybe they are just too good at playing women. Or perhaps it is the strength and inspiration each one finds from the group’s support that empowers them.

In recent weeks, I’ve received news of screenings and shows that support this transcendence: the documentary Kate Bornstein Is a Queer and Pleasant Danger chronicles the life of this iconic gender outlaw; Diane Torr’s drag king performance and workshops are the focus of Man For A Day; Just Gender will play as a benefit for the Jim Collins Foundation that gives scholarships for surgeries. Red Umbrella Project, the sex worker’s rights group, has produced ”In My Skin” from the work of their trans women’s theater ensemble. Everyday there is news of more.

One of the most provocative documentaries on gender and body image is Beth B’s Exposed, a look at the stars of neo-burlesque. The film’s participants show that to transcend gender is not a state reserved only for trans people, but a province open to all. Women transcended gender; we created the womens’ movement and moved from the bedroom to the boardroom.

It is so much fun to play dress-up. The opportunity to step out of one role and into another is often irresistible. The clothing and props, so seductive. What will I look like? Who will I be? This is why audiences love a drag show. But drag was the warmup act for what’s happening now. Transgender people are not putting on a show. There is no script to follow and there are even arguments over the words. Do we proceed in fear and anger, or do we proceed with love and trust, grateful that humanity has so many more options? 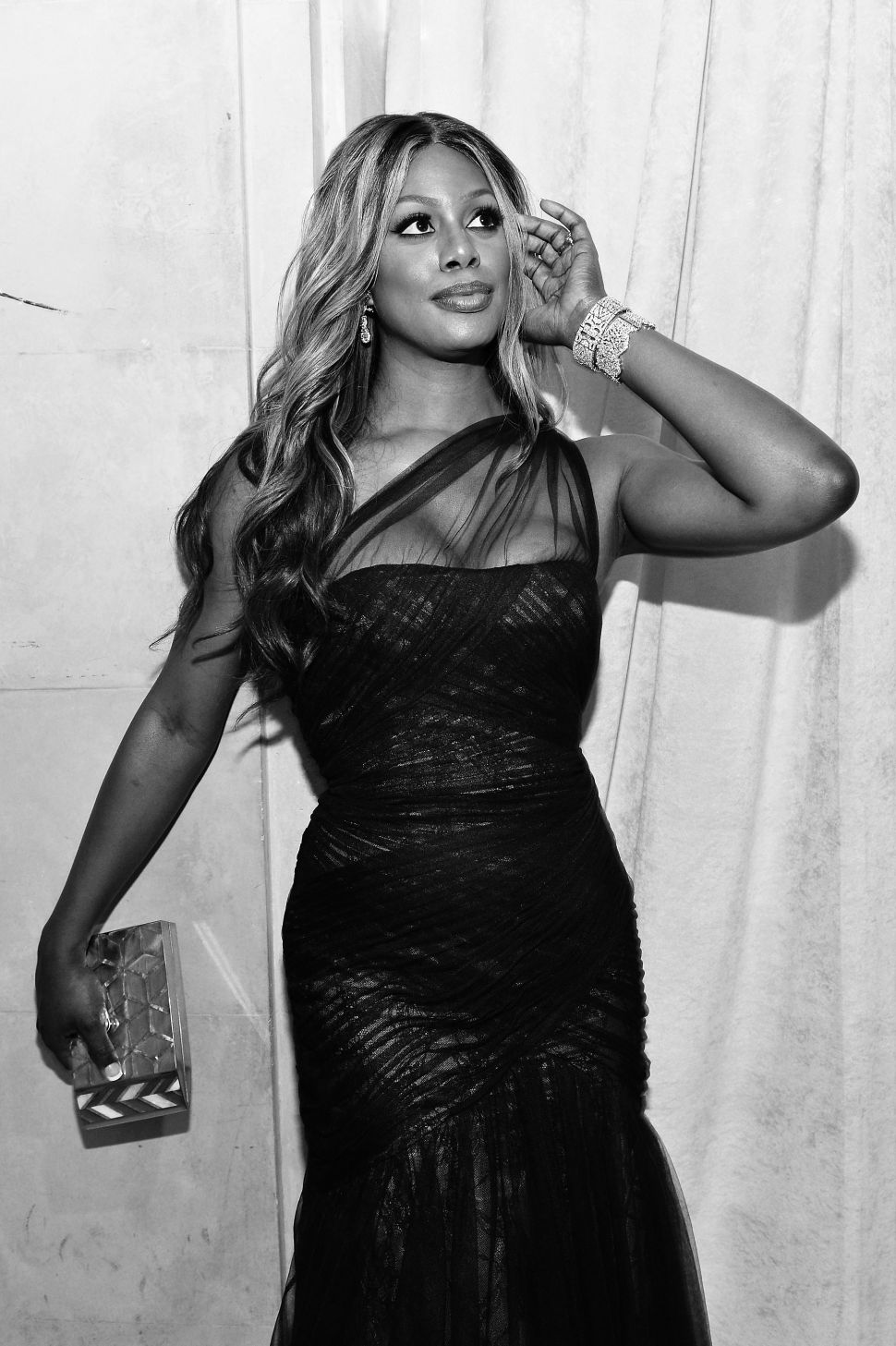