Because it’s a show littered with some of the most graphic sex scenes on television, I’m going to put this in the terms most appropriate for the True Blood audience: The season 7 premiere, “Jesus Gonna Be Here,” blew its load way too early.

Let me explain. Season 7 kicked off with True Blood‘s second favorite thing beneath human-vampire coitus…VIOLENCE! A horde of Hep-V infected vampires has descended on Bellefleur’s and things get bloody. It’s basically a whirlwind of neck biting and heart staking with confused Anna Paquin face randomly mixed in for good measure.

Somewhere amid the chaos, Tara is trying to protect her bat-shit crazy mom, Lettie Mae. This leads to season 7’s first of an inevitable 3 million slow motion vampire fights. It’s dramatic. You can tell because, slow motion.

More blood. Arlene and Holly and a bunch of unimportant people get carried off by Hep-V vampires. Sam turns into a dog to give chase. I daydream about season one for a while.

Finally, the melee ends. I prepare to write a joke that probably would’ve sounded a lot like “I guess Hep-V vampires are allergic to eating main characters, lol” when we hear Lette Mae wailing off-screen. As it turns out, the aforementioned slow motion fight ended with Tara being turned into a disgusting pile of guts. Tara dies Offscreen.

“They killed my Tara,” Lettie Mae cries, and I reply to this completely fictional TV character “Good riddance!” Tara as the walking human sass-monster that constantly made poor life decisions was an annoying television character. Vampire Tara was downright unbearable. So, yes, I fully admit to putting the writing of this recap on hold to do a happy dance over Tara’s first episode demise. Feel free to do the same as you read it.

(Sidenote: I am aware that this is TV and it is entirely possible that Tara’s death is not permanent. TV shows, especially horror TV shows, have a tendency to bring people back from the dead frequently, cough American Horror Story: Coven cough.)

Anywho, with the death of the major character happening so quickly I was actually pretty pumped for the rest of the episode. And then for the next 40 minutes, well, nothing really happened. Despite pretty much every character saying something to the effect of “It’s not safe out there!” giving the viewer the hope that something semi-exciting might happen, the rest of the episode consists of people just sort of interacting in uninteresting ways.

Let’s round up the tediousness.

Troubles abrewin’ because the man whom Sam beat to become Mayor, Vince, saw Sam transform from a dog in to a human. “You’re a motherfuckin’ dog,” Vince queries pensively. Definitely going to need to keep an eye on that Vince character going forward.

Sookie hears people thinking mean things about her. It’s upsetting. The upsetting scale goes up a notch when she overhears Alcide kind of, sort of, a little blaming her for vampires constantly terrorizing Bon Temps. Because she is the most irrational and undateable object of affection in TV history, she gets mad and decides to walk home alone. Which isn’t smart because as I mentioned, “It isn’t safe out there!”

Don’t worry, Alcide eventually catches up and their fight is intense. “Newsflash, I can read your fucking thoughts!” Sookie dramatically states. At least I think that’s what she said, I was preoccupied with attempting to jab a pencil in my ear so I’d never have to hear a line like that again.

Meanwhile, Pam is in Morocco searching for Eric. Her search apparently involves playing Russian roulette with another vampire that looks like a young Tim Curry in a crowded bar because that’s what happens. They talk shit. She wins. Story…progressed?

James and Lafayette smoke pot. “All my friends died,” James says after ripping the bong. Way to harsh that buzz, bro.

What else, what else? Since literally nothing of importance happened in Jason Stackhouse and Violet’s storyline, let’s speed this thing up with a segment I like to call, “Things That Were Actually Said.”

Violet attempting to intimidate an anti-vampire vigilante group that her and Jason encounter: “Why don’t you take your puny little guns back home, and go fuck your depressed homey housewives, with your tiny, little dicks.”

A woman in the aforementioned anti-vampire vigilante group: “What if I don’t have a dick, can I stay?”

Meanwhile, Andy and Bill team up to search for Hep-V vampire nests and possibly set the gears in motion for the best buddy cop spin-off of all time. Wouldn’t you know it, they too encounter an anti-vampire group looking to take the law in to their own hands. A tense standoff ends when Andy’s all, “Psh, I don’t even like vampires I’m on your side. Let me have your gun.” When one of the vigilantes brilliantly hands Andy their gun he’s then all like, “Nah JK leave Bill alone.”

Speaking of Andy, did I mention that for the entire duration of the episode Jessica is guarding his house with his half-faerie daughter Adilyn inside of it. One, just one, Hep-V vamp shows up and Jessica squares off with it for three entire fucking scenes. Seriously, Jessica basically says “You better not come any further” for the entire episode. In fact, this goes on for so long that the sun eventually comes up, and that’s how the stand-off ends. Seriously.

In keeping with the theme of nonstop excitement the episode ends at a church service. Sookie once again hears the townsfolk inside her head calling her a vampire-whore and blaming her for all of Bon Temp’s problems and a host of other true things.

Since Sookie’s a strong independent woman, she channels her anger into a positive and delivers a grandiose speech to the funeral, pleading for them to be understanding and ending it with “I wanna help. Please let me help.”

A single churchgoer begins to clap. Then another. The swell builds until everyone is on their feet, applauding Sookie’s bravery in the face of adversity. They begin to chant her name. With the town as unified as ever, Sookie looks directly into the camera and declares Bon Temp’s troubles, and with them this entire season of True Blood, are over.

Just kidding. The episode just ends after Sookie’s speech, and I’m grateful she can’t hear my thoughts through the screen. 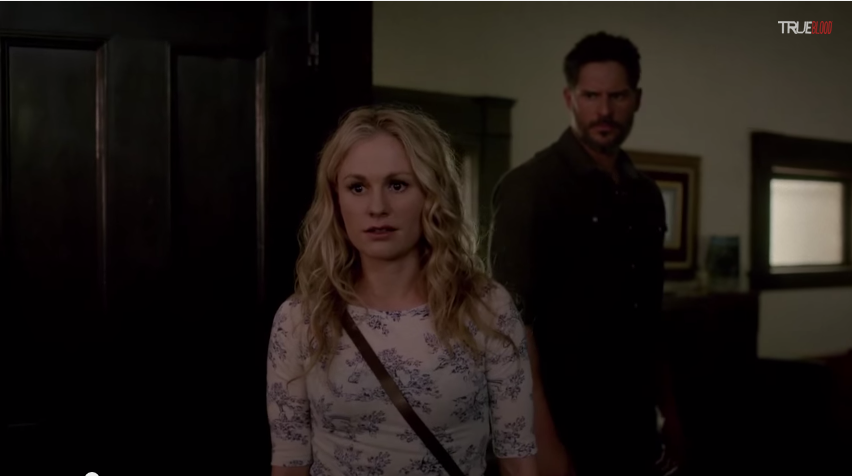