I felt a great disturbance in the force last night, as if a million shrill voices cried out at once, and suddenly started “I <3 Alexander Skarsgard” Facebook pages.

Yes, vampire Eric didn’t actually die last season, SHOCKER. If you actually thought that HBO would keep Mr. Skarsgard’s  face off our screens for very long, your nuttier than Lettie Mae Thornton all hopped up on V (for the record, click this link for a picture of a swimming pool filled with all the fucks I give about the Lettie Mae-V addiction storyline).

But yeah, Eric appeared in the first five minutes of the episode, in a totally necessary scene where him and Jason Stackhouse get it on, baby. The whole thing stinks a little bit too much of “please watch our final season, we still do stuff like this” and to top it off, turns out it was all a dream. It’s almost like they’ve done something like that before.

So Eric can’t be dead, or else Jason Stackhouse is just having sex dreams about another man, instead of the vampire he has a psychosexual connection with. Keep up, y’all!

In other news, the remainder of Bon Temps is painfully stupid.

The town gathers outside of the church to try and recoup from the Hep-V vampire attack, which apparently has everyone so preoccupied that no one has time to give a shit that Tara died. Seriously, did anyone mourn for longer than 2 minutes?

“BTW I saw a dead girl in the woods last night lol,” Sookie offers helpfully. This leads to two out of the three law enforcement officers Bon Temps seems to have AND the mayor leaving the parish up to their own devices in order to investigate the random dead girl’s hometown, Saint Alice. Don’t worry, they left Kenya behind. Kenya’s got this.

The rest of the town cleans up Bellefleur’s because nothing distracts you from being surrounded by grotesque blood-thirsty monsters better than a little spit shine. That asshole Vince that saw Sam turn into a dog shows up to be an asshole. Everyone is unsure about his anti-vampire rhetoric until they find out the freezer is filled with dead bodies. Seriously, how long were they going to clean that bar before they noticed the freezer was filled with dead bodies? (Ed note: I guess awhile, now that Terry isn’t around to do Charlie Work.)

Anyway, an anti-vampire mob forms and proceeds to make stakes out of all of Bellefleur’s wooden furniture, calling into question the quality of furniture used at Bellefleur’s.

The mob makes its way over to the police station to get themselves some guns. Don’t worry, Kenya is there. Kenya’s got this.

“We need the guns, Kenya. If we’d had them last night you think half this town would be dead, or missing?” Vince says, because after drying up the well on heavy-handed LGBT rights allegories, True Blood has apparently moved on to gun rights.

Turns out Kenya DOES NOT GOT THIS. After mentioning that Andy Bellefleur both offered her a promotion and is white, Kenya decides to side with the mob. In an attempt to stop her, Adilyn Bellefleur reveals her shiny faerie powers. Because in the True Blood universe the ability to become a flashlight is just as terrifying as drinking blood, the mob points a shotgun in this obviously terrified 18-year old’s face.

““What the fuck’s going on with that, I have no idea.” Maxine Fortenberry says, summing up my thoughts for the past six seasons of True Blood. With their hands on the guns, the residents of Bon Temps proceed to act so stupidly that I am officially rooting for the drooling vampires afflicted with a disease that makes them want to tear humans apart.

Oh, at some point during all this Lettie Mae goes to Lafayette in an attempt to buy some V. Click this link for a picture of a stadium filled with all the fucks I give about Lettie Mae asking Lafayette for V.

Meanwhile in St. Alice, the show turns into The Walking Dead for a couple minutes, another show where people stop to write exposition-graffiti instead of fleeing from the horror around them. After finding a mass grave filled with the entire population of Saint Alice, therefore giving them the exact answers they came for and rendering any more time spent there useless, Sookie and Co. decide to stick around to explore some houses.

Andy uses this opportunity to sulk. “A man ain’t nothin’ without a family,” he says, insulting about 95% of this show’s male leads. Sookie finds the diary of the woman she found in the woods, and reads it because Sookie is kind of a bitch. Turns out the woman is exactly like Sookie, which makes me glad we never saw her character alive.

Back in Bon Temps, Lettie Mae purposely burns her hand on a stove so she can drink some blood from her vampire guardian. She then proceeds to trip balls, seeing a vision of Tara hanging on a cross with a snake around her neck. As a special bonus for you readers, here is a picture of an ENTIRE CANYON just filled with all the fucks I give about Lettie Mae’s vision of Tara.

Sookie lies to the only person who has ever really been genuinely nice to her, Alcide, to go ask the guy who turned into a violent vampire god last season whether he could still sense if she got into trouble. I assume because she is going to go get into trouble. Dammit, Sookie.

Oh, during this entire episode we get some scenes with the kidnapped Arlene and Holly being held in the basement of Fangtasia, and an attempted escape attempt with the help of a woman named Betty. I would focus more on that but I prefer to talk about scenes where literally anything of importance happens.

Finally, Pam finds herself in Rhone, France, where she is dramatically reunited with Eric. And it isn’t a dream (I think)! Yup, Eric is alive and back and…napping? I suppose bursting into flame on a Swedish mountainside is tiring work.

Are we ever going to find out how that Najat guy just sort of knew where Eric was without explanation? Like, who are his sources? How did he find Eric when Eric’s own progeny couldn’t? And why am I still asking questions like this after watching six seasons of this show? 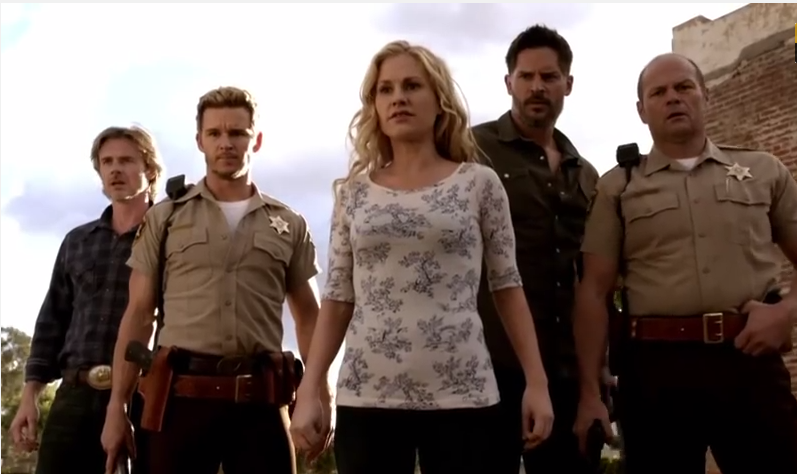