Urban Outfitters has just opened an absurdly large store in Herald Square, where one can not only get dressed, but get a haircut and have a snack. Food, clothes, haircare, what more could you need?

Maybe a bar, but Brooklyn’s Urban already has that covered.

The new store, three levels and over 56,000 square feet, opened Saturday and is nearly four times the average of any other Urban Outfitters.

“It’s giant, I got a little lost,” Melissa Buriak said upon exiting the store. “I didn’t even see the hair salon.”

Tucked in the back corner of the ground level is Hairrion, an L.A.-based salon that is co-located with an Urban store in California, which flew in some of its stylists for its new, and only, New York location.

“It’s great, with the store right here,” said Naima Filali, standing at the front desk that opens both the salon and the store. “We’re taking walk-ins. People want to come in after shopping.”

For Ithaca native Brittany Manuel, the salon may fit a little too well into Urban’s alternative vibe. “No, I wouldn’t go to get my hair cut here. I don’t know, too different I guess,” she said, her Urban shopping bag in hand.

And these cuts and colors aren’t for the average bohemian. At $90-$160 a cut and over $100 an hour for braiding, expect to leave Urban and Hairroin with a somewhat lighter wallet.

But the store, which also features L.A.-based coffee shop Intellegentsia and other shop-in-shop departments, has plenty to offer patrons on its own.

In a chain that usually jumbles clothes, jewelry, shoes, and accessories throughout its stores, this Urban, found behind the Macy’s flagship store, has actual departments for its merchandise. We can’t help but speculate about an Urban identity crisis—department stores are a little mainstream, don’t you think?

The men’s department on the lower level has a printer that custom prints designs onto Chuck Taylor’s iconic high tops while you wait. The store also offers an athletic department, a glasses area (because hipsters), a shoe department replete with jellies, and an extensive record shop curated by Amoeba Music. On Thursday, the store will host director Gia Coppola and Dev Hynes for a record signing for the Palo Alto soundtrack.

The store also houses the chain’s first-ever Beauty Shop, offering everything from makeup and skincare to men’s grooming products. Urban is also the largest distributor of Korean products in the U.S., a company spokesperson told the Observer. So if you ever needed panda-shaped face lotion, you know where to find it.

Photo booths are scatted throughout, offering “High Fashion Lighting Effects.” You can buy everything from the world’s smallest playable harmonic to hemp-based hair spray, or even stop by the vending machine to pick up a bag of M&Ms and an iPhone charger.

Standing nearly every five feet in the Herald Square location is an employee. Clad in five-panel hats, plaid shirts (untucked, of course), and skinny jeans, with a few piercings thrown in here and there, male employees greeted and thanked every person who walked in and out the doors.

The store was full of meandering tourists, speaking every language under the sun, while true New Yorkers filed past outside.

“Oh, the new store is open,” one woman, in worker’s coveralls said, slowing down to peer into the windows. “Keep those legs movin’,” shouted her coworker, already half a block away.

With food, clothes, and home and beauty products, you could essentially live in the Herald Square Urban Outfitters and never need to leave. 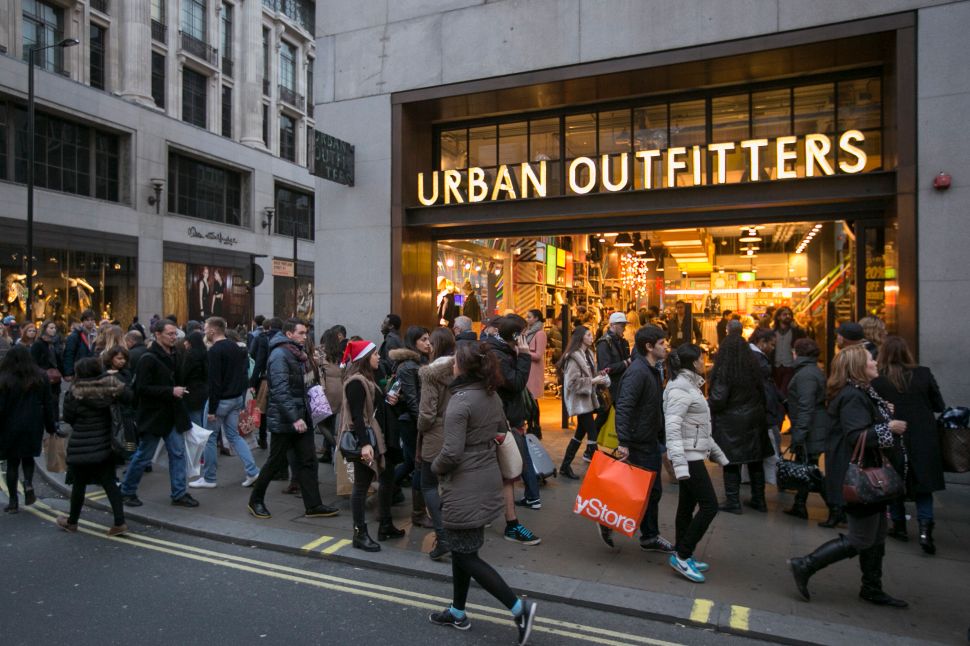