1. I get why the Night’s Watch cares about defending the Wall, but why should we? We just watched our lovely Prince Oberyn get Scanners’d, why are we now transported to the least fun place in all the Seven Kingdoms?

You know how people like to smugly tell you to “read the book”? Well, read the book…not because the fight scene was written any better, but because it gives you a sense of how much George R.R. likes to fuck with his readers that way: have a giant climatic moment, then cut away for 10 chapters about some nonsense happening in another part of the goddamned world. One time, he spent an ENTIRE BOOK ignoring the main characters who anyone cares about so he could focus more on this Wall nonsense. (And also Griff. But, continuing!)

Maybe it was because I wasn’t expecting an entire episode about the Wall to hold my interest…We can all admit that Jon Snow is by far the least interesting Stark/character on the show without starting a flame war, correct?

But I was wrong. Holy god. If you watched it on HBO GO, you’re really cheating yourself out of an experience. Those giants! Those mammoths! That fucking kid Olly! Sam Tarly finding a magical pair of Prince Oberyn’s balls that must have rolled off after last week’s battle…somehow he’s managed to find a way to attach them to his own junk. Now he’s SUPER SAM! (Like literally, no character development needed: Sam is just a MAN now, and that’s what MEN DO, GILLY!”) (God, Gilly. She and Janos deserve to be locked in the closet forever.)

Also: HBO spent what looks like Pirates of the Caribbean money to get this CGI/stunt choreography masterpiece off the ground, and it is epic, and awesome, and most importantly, it gives us a sense and scope of the Wall’s importance as the only thing between us and a horde of ice zombies/wildlings/giants/wargs/cannibals/cold air.

The Wall has always been the emo brother to the rest of Westeros: now we’ve finally made it to one of those dark metal shows he’s always inviting us to, and it turns out he can shred like a Norse God. Sorry, Night’s Watch!

2. Wait, are wildlings good or bad? Why haven’t they tried to scale the wall before, with a bunch of giants? Are they friends with White Walkers?

So there are two huge armies coming from north of the Wall, invading to the south. Mance’s army and this big group of White Walkers. So obviously they are friends, right?

Wrong. The wildings and the White Walkers are far from allies. The wildings are terrified of them; they’re their boogeymen, creeping out of the forest at night and stealing their kids. In fact, this is the real reason that Mance is able to unite the tribes and have them invade south: he’s helping them escape the growing force of the White Walkers.

See, 8,000 years ago, the White Walkers gathered together into a huge army and invaded Westeros, and were only pushed back by a united force of the entire continent. That’s why they built the Wall in the first place: to keep the White Walkers from ever invading again.

This all happened during a really long winter, a winter that lasted an entire generation. (In the world of Game of Thrones, the seasons are erratic, so sometimes a winter can be short and sometimes very, very long.) Since that long winter, the White Walkers have not been seen, and have become legends that most people don’t believe anymore.

But now, with the end of a very long summer and the approach of what promises to be an equally long winter, they are reappearing. This is what the wildlings are really afraid of when they say winter is coming. They’re not freaked out by a little cold weather—it’s always snowing north of the Wall. They’re freaked out by what comes out of the shadows when the long winter comes. You know, that unstoppable army that can raise the dead?

So why haven’t the wildlings used giants to try to break the steel gates and get through the Wall before? Because they never really had a reason to. They were all off in their separate tribes, doing their own thing. The giants were off doing gianty stuff, the cannibals off eating their enemies, etc. Only now, when Mance convinces them that staying will mean death (and possible resurrection as a mindless zombie), do they pool their powers to try to escape South of the Wall.

As for whether the wildlings are good or bad—what show do you think you’re watching? Sure, there are some characters we can all agree to hate: Joffrey, for example. But is the Hound good or bad? How about Stannis? Game of Thrones is not a show that deals easily in Good vs. Evil, black-or-white tropes. Take the example of Ser Alliser in this very episode. We have come to dislike him because he and Jon are antagonistic, but then he’s super-heroic in the battle, and it’s hard not to see why he was made Lord Commander.

3. So, specifically: What is the deal with the Night’s Watch?

First of all: Wordplay! Because they are not “knights”…at least not now. Originally, the Night’s Watch were one of the oldest orders in the Seven Kingdoms, and respected as heroes after fighting off those White Walker zombie things 8,000 years ago. Now it’s just a place Westeros sends its worst criminal offenders who pled guilty or otherwise escaped punishment. (Tyrion was going to be sent there, before he asked for trial by combat. So was Ned, before he lost his head.)

This is also why the outpost is treated half like military—with a Lord Commander in charge, and different ranks of leadership—and half like an #OWS protest where no one really knows what they’re doing or who is in charge, but at least we’ll all get a shot at “taking over” the Wall when Janos Slynt pusses out or Jon needs to go into the middle of a giant battle to sing “A Little Fall of Rain” with Eponine/Ygritte.

The whole system has just fallen apart completely, with the last Lord Commander getting killed by one of his own soldiers during a retreat from the White Walkers, back at Craster’s. The Night’s Watch is always half on the verge of mutiny, because things suck out there and no one seems to know how to make life any less terrible and cold.

The Night’s Watch lives (mainly) in Castle Black, which at the base of the center of the Wall. Technically, there are 19 other castles along the Wall that are also supposed to be inhabited by the Night’s Watch, but their numbers are dwindling and new recruits are hard to come by, so Castle Black is the main hangout area.

4. Who is this Mance character? Why is he the only one that’s able to unite the wildlings?

Mance Rayder was born a wildling, but when he was an infant, he was left at Castle Black to be raised as a member of the Night’s Watch. When he got older, he didn’t like all the rules and restrictions of life at Castle Black, so he abandoned his post and fled north of the Wall, where he lived among the wildlings.

Mance is both a skilled, ruthless fighter and a very intelligent man, and he rose quickly to prominence among the Wildlings. Having been a member of the Night’s Watch, he has superior knowledge of the tactics of the “crows,” and he is thus a very effective military leader, but he also understands the needs and desires of the different wildling tribes and is able to deal with them diplomatically.

This is important, because the wildlings generally exist as many different factions and groups who fight against one another, with no leader to unify them. But Mance becomes the King-Beyond-the-Wall, uniting all the tribes by convincing them they all have a common cause—getting south of the Wall. Why? Because (everyone say it together, now): Winter. Is. Coming.

5. Who is that little kid that hits Ygritte with an arrow? I thought all the Night’s Watch were supposed to be older dudes.

That’s Olly, the new Commander of the Night’s Watch. (Well, not really, but considering their OWS-like philosophy of letting any goddamn person “man the wall,” sure.) He fled his village after the wildlings and those crazy cannibal dudes killed everyone in it. Weirdly, the cannibals let the kid survive, with explicit instructions to let the Watch know they’re coming. (Why did he do that? To give them warning? Why?)

Olly’s killing of Ygritte—complete with that creepy head-nod to Jon, like “Yo brother, got your back!”—is both heartbreaking and satisfying, as that kid just avenged his parents and community, whom Ygritte slaughtered. Like, personally slaughtered. (She even reckons her death toll is higher than Baldie McEatsPeople.)

In the books, Jon Snow doesn’t get to stop fighting to have a wimpy little goodbye to his girlfriend: someone shoots an arrow and she falls off the wall, and Jon watches her go. He feels bad about it, but not bad enough to take a breather in the middle of the battle. Olly had the right idea: Ygritte was great, but she was only keeping Jon down. Still, I’d rather it had been Gilly. ENOUGH WITH THE WHINING, GILLY! 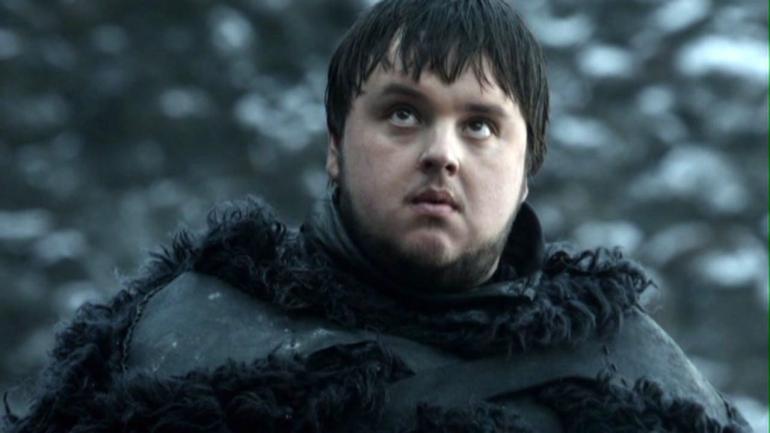