While the unveiling of tiny houses and prosthetics for baby ducks shows the industry has potential, we didn’t expect to see a Black Eyed Peas star leading the 3D printing parade.

In a short video to promote the 3D printer, which prints with filaments of recycled plastic, Will.I.AM delivers facts about post-consumer plastics, as well as a hearty “welcome to the future.”

Will.I.Am was named 3D System’s Chief Creative Officer in January, basically à la Ashton Kutcher at Lenovo. Upon his appointment, the company announced that Will.I.Am “will inspire, shape and drive all of 3D’s initiatives to mainstream the use of 3D.” We guess the fact that “My Humps” was so popular somehow makes him qualified for the job?

Oh wait, he did develop that robotic dancing dog once.

Thanks to these high-profile backers, 3D System could be the first 3D-printing company to become a household name, if that’s even possible. Still, however, we get the sense that the everyday consumer still doesn’t know much about 3D printing, and it seems unlikely they’ll be lining up to shell out $1,200 so they can print bracelets and iPhone cases from home — even if the printer’s backed by big names.

Also, it seems kind of misguided for 3D Systems to think that a beverage company and a no longer relevant pop star would sway people’s tech interests. 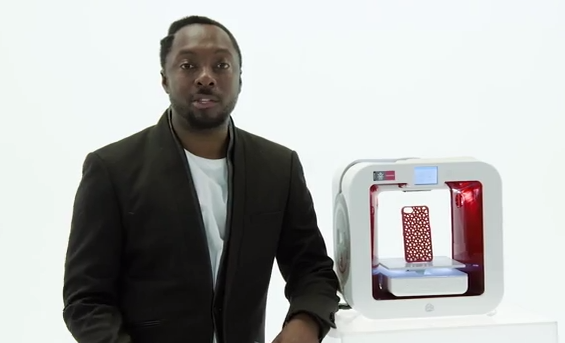 Filed Under: Innovation, dispatches, 3D printing, Coca-Cola, Will I Am, 3d printers, mainstream