Hope, against all evidence, odds and prior experience is frequently found in hospitals, wedding halls and real estate transactions. In these settings, facts, figures and the advice of experts often fail to exert any sway. After all, the heart wants what it wants.

And when it comes to real estate, despite the fact that cool calculation should undeniably dominate wishy-washy vicissitudes of emotion, the problem is particularly pronounced. To wit: the Woolworth penthouse, which Bloomberg reported today will be listed for $110 million dollars, according to the condo offering plan filed with the attorney general’s office.

Never mind that the current downtown record was set at $50.9 million in January of this year, when the Walker Tower penthouse sold. And that no residential property has ever been able to cross the $100 million threshold, not even One57, which hovers near the threshold, but is situated in a much more desirable location. The Central Park-adjacent area has, of course, an $88 million sale to its name, the $90 million-plus One57 contracts and the $70 million Ritz-Carlton penthouse purchased by casino king Steven Wynn. But the Pierre triplex penthouse, a unique gem if ever there were one, has languished on the market after listing for $125 million, even in what is arguably the perfect location. The unit has yet to sell at even at the considerably-reduced $95 million.

So what were developers behind the condo conversion of the Woolworth Building, which will feature 34 super-luxe apartments when all is said and done, thinking with an asking price that seems destined to fail? Particularly given that the developers, Alchemy Properties, has built a solid reputation in the city for no-nonsense luxury that’s priced to move?

Apparently, it seems like they were a bit swept away by the historic nature of the property, or at least, that’s what Jonathan Miller thinks. The penthouse will be located in the tower’s distinctive copper cupola and measure an impressive 8,975 square feet. Either it will be nine stories, which honestly seems like a bit much, or five stories, which sounds more reasonable, but still a bit much. In any event, appraisal guru told Bloomberg that “the price is more reflective of the unique historical nature of the property”  than demand for trophy properties or a major shift in the fortunes of the Lower Manhattan market.

Which probably means that no buyer, save for the desperate divorcing Russian oligarch, is likely to drop that much money on the penthouse. And even Russian oligarchs are somewhat savvy about where they spend their hundreds of millions. 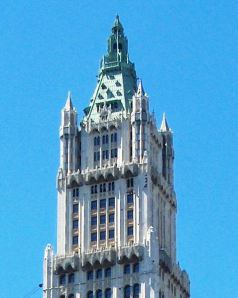