We’ll get to more analysis later. Here are some immediate takeaways.

In the race for the Democratic nomination in CD12, the veteran assemblywoman from the 15th District convincingly beat her rival. In the end, her win didn’t surprise too many insiders, who were stunned by the margin.

“T-Mac,” as he is called in Ocean County, went T-Rex on rival Steve Lonegan in the money race and won the GOP nomination for Congress in the 3rd District.

The veteran political operative from the City of Trenton notched the most important political win of his career last night, helping his close friend and mentor Watson Coleman get elected. HUGE on the strategy front.

The 24/7 human messaging machine and direct mail animal – originally from West Orange and transplanted to the Jersey Shore – would not shut up about Watson Coleman until she won.

First Paterson now back to his base. The Ocean County GOP Chairman outplayed Steve Lonegan and helped land MacArthur the nomination in CD3.

The Laborers and the Carpenters

The East Ward Democratic Committee Chairman fought off a stiff challenge from the allies of Newark Mayor-elect Ras Baraka.

Having decided himself not to run for the CD12 seat, the princely Hughes went all in with Watson Coleman. “South Jersey, North Jersey, and Mid Jersey all learned that Mercer County isn’t going away,” Hughes screamed from the stage last night at the assemblywoman’s victory party.

The Union County Democratic Chairman got gashed in Linden with the loss of the establishment mayoral pick, but – in a critical contest – staved off embarrassment in Plainfield by stemming a rebellion led by Mayor Adrian Mapp and maintaining control of the council.

There was a joke going around that Fonseca – camped out in West New York for a lurid 72 hours prior to Election Day – had borrowed the same tent his former boss Cory Booker employed in Newark’s Central Ward all those years ago and set up a base camp on the Palisades. Caridad Rodriguez’s win last night cemented Fonseca – branded in Newark – as a Hudson County player.

With Rodriguez’s win, the West New York mayor strengthened his position for re-election next year.

In arguably the biggest upset of the night, the incumbent freeholder from Hoboken – with the help of Michael Russo – powered his way past lovable nerdlet Phil Cohen to win re-election.

UP IN THE AIR

CD7 incumbent Republican Lance won, but by just eight points – while all backs were turned. This was Larsen’s third shot, and his best-ever showing. Larsen ain’t going away. Look for a fourth tilt in two years, this time from a challenger who will be in a better position to harness more movement conservative muscle. Is Larsen the new Lonegan?

There was a lot of back buzz about the political lifespan of the 17th District assemblyman, who challenged off the Middlesex line for a CD12 seat. His better than anticipated showing – and fundraising prowess – makes dumping him harder for the establishment.

Always keeping it interesting and running a savagely subversive race against the machine that shocked political neophyte MacArthur, last year’s Republican nominee for the U.S. Senate ate his sixth straight loss in a big race.

The state senator from the 14th District took a beating from Watson Coleman last night. It showed early at the polls in the home towns of the two women. Ewing hummed. Plainsboro looked like a morgue.

The savvy Middlesex County Democratic chairman ended up having to eat a loss at the footstool of the heretofore utterly unintimidating neighboring Mercer County.

The Plainfield mayor went 1 for 3 last night, keeping his chief lieutenant in her seat but losing a chance to seize control of the city council.

The campaign manager for Greenstein – front-man for powerful unseen forces – presided over an unruly mess that was the 2014 Greenstein for Congress Campaign.

Ever beaming in the background at any public event where someone stands to open up a passageway to power, the 14th District Assemblyman will not now have a clearer path to the state senate – unless he challenges Greenstein in a Democratic Primary.

Like his district-mate Benson, the labor leader will have to fight off that upper chamber twitch for the moment, unless the electrical worker – routinely the 14th’s top vote-getter – decides to light up a Greenstein with a 2017 primary challenge.

The Hudson County Freeholder director failed to win re-election last night, and also failed to beat Rodriguez in West New York, minimizing his own chances to be successful next year against Roque in a mayoral election.

The incumbent freeholder fell under the tire treads of the Jerry Healy era last night with his loss off the line.

The 31st District senator felt her grasp on the district loosen somewhat with Dublin’s loss. 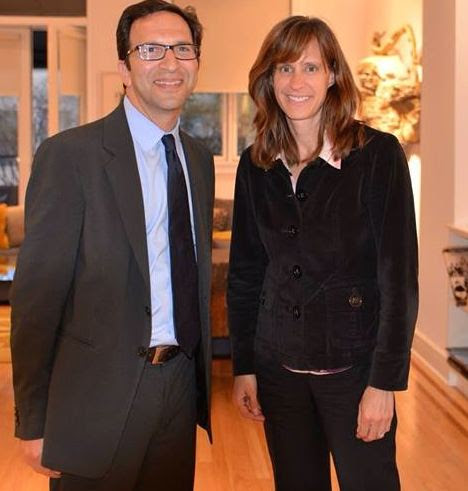