Mark Smith’s loss tonight in Bayonne boomeranged in heartbreaking fashion on Assemblyman Jason O’Donnell (D-31), who stands to be out of the legislature next year – or at least out of the good graces of the Hudson County Democratic Organization – based on what happened tonight.

There are at least four obvious frontrunners to elbow O’Donnell off the coveted Hudson County Democratic Organization (HCDO) line.

If Fulop wants to go with a Latino, Perez could be that man.

Then there’s Hudson County Freeholder Bill O’Dea, who wants to run for county executive but might be forced to settle with an assembly seat.

O’Dea would have to move into the district to be a candidate, but he could pair up with Perez as a replacement team for O’Donnell and the already vulnerable incumbent Assemblyman Charles Mainor (D-31).

Finally, don’t write off Nicholas Chiaravalloti (pictured), a former statewide director for U.S. Sen. Bob Menendez (D-NJ) who ran unsuccessfully for the assembly on a ticket with Lou Manzo in 2007.

Now employed by St. Peter’s College, Chiravalloti has been a key inside man with the Davis Campaign for the runoff. 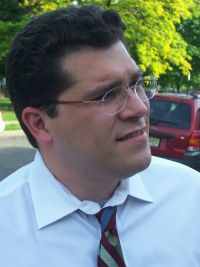