“Happiness is the most insidious prison of all,” said V.

And the traditionally euphoric World Cup brings nothing but the cruelest incarceration of Brazil, according to hackers clad in V for Vendetta costume.

Anonymous hacked the New York Board of Elections website with an ominous video to protest the World Cup, set to begin Thursday.

In untracable computerized tones, Anonymous announced that “while the Brazilian people are dying, FIFA will profit millions.”

The $11 billion cost of hosting the games and the uprooting of some of the poorest Brazilian citizens have been decried by opponents as misplaced priorities by the government, The Village Voice reported.

“Over the years we have been watching you,” they addressed Brazilian President Dilma Rousseff, mentioning the neglect of health, education and public safety. “Anonymous has decided that the World Cup should be boycotted and destroyed.”

The New York Board of Elections website was down until around 5 p.m yesterday. “Careful what you wish, can be deliciously dangerous,” warns Anonymous Operations on Twitter.

The leverage of the anonymous organization with the Brazilian people remains unclear, but in April less than half of the nation’s population supported hosting the World Cup, according to the Wall Street Journal.

Anyone attending the games can only hope these threats are empty. 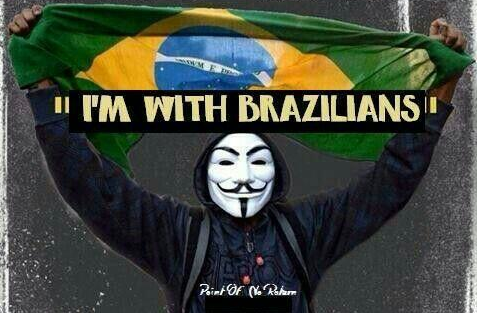