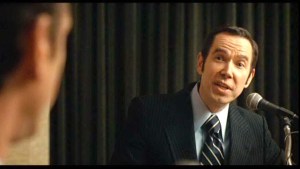 The entire world has erupted into chaos and mass hysteria as we await the opening of “Jeff Koons: A Retrospective” at the Whitney Museum on June 27. Reports of rivers running red with blood and plagues of locusts are coming in from across the globe and only Jeff Koons can save us! Protect your first born! We’re only about two weeks away from a new golden age of peace and love at the hands of really expensive sculptures of Popeye!

Harvey Milk [as played by Sean Penn, speaking to Art Agnos]: My god, you’re handsome up close. I can’t tell you how much I’m looking forward to licking you in the polls.

Art Agnos [as played by Koons]: [Chuckles] You know Harv, your whole rap’s a real downer. You talk a lot about what you’re against, but what are you for? In this town, you gotta give ‘em a reason for optimism, or you’re cooked. See ya around.

Koons for President! Somebody get this guy a campaign adviser! Those sideburns are approaching Elliot Gould-in-MASH-level machismo!

Remember the time Jeff Koons told W Magazine that Led Zeppelin “taught me how to feel”? (In what song do you think Jeff Koons learned how to feel? My vote’s for “Black Dog” because of all those sculptures of puppies he makes, but I’m open to suggestions.)

Remember the time, later in that same interview, that Jeff Koons said, “When looking at a gazing ball, one of those reflective balls that people have in their yards, you experience transcendence; the ball becomes everything”? Jeff Koons! Balls!