Plug it in (Indiegogo).

As techies anxiously await the news on Amazon’s unnecessarily camera-loaded phone to be released tomorrow, we’re wondering why no one has developed a smartphone that can simply hold a 24-hour charge.

In an effort to combat one of the most devastating first world problems, ChargeAll has started a campaign to fund the “world’s smallest portable power outlet.”

Portable chargers for small devices such as phones and tablets are nothing new, but this startup offers the chance to charge anything you could plug into a wall on-the-go. In addition to USB ports, the ChargeAll device also features a three-prong wall outlet so you can charge your fan, curling iron or even your electronic blow job machine.

The device is fast charging and comes in two models, Portable and Powerful, both of which are hardly larger than an iPhone 5 and can easily fit in your pocket or bag. The Portable model, which will go for around $110, can provide seven full charges for an iPhone and 15 hours of power for a desktop fan. The Powerful model, priced around $150, can charge and iPhone up to 11 times and power a fan for up to 20 hours.

The device isn’t a reality yet, but the campaign has until July 30 to reach its goal on Indiegogo. 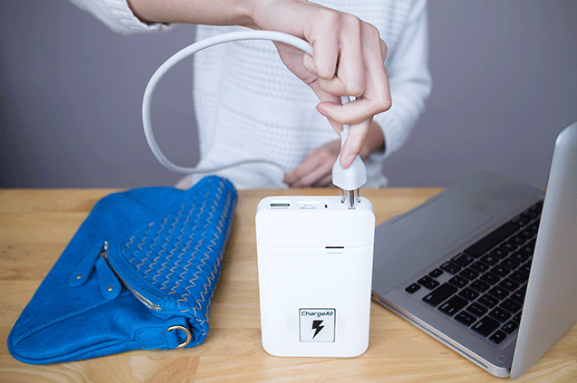