In many corners of Manhattan, the recession was as much about what didn’t happen as what did. Apartments went unsold, deals undone, condo projects unbuilt—among them 15 Renwick Street, a 9,014-square foot site in Hudson Square where developer Harry Jeremias planned to erect a 12-story Ismael Leyva-designed tower.

But in the years since the housing crash, even the most stubborn traces of the recession have vanished from the Manhattan real estate market, lost in the effervescence of so many $10 million, $20 million, $40 million and now $70 million closings. And Hudson Square, which was just last year rezoned for more residential development, is more than poised for a condo boom, positioned as it is between Tribeca, Soho and the West Village. So it is only fitting that 15 Renwick would be preparing for a market push, albeit this time under the aegis of a different developer and architect: Eldad Blaustein of IGI-USA (a subsidiary of major Israeli firm Izaki Group Investments) and Eran Chen of ODA. (Mr. Blaustein said he paid $11 million for the site, a steal given the $56 million that the previous developer had put into the site and planning.)

A September sales launch with CORE is expected for the new project, an 11-story, 31-unit luxury condo that will include three adjoining townhouses and four duplex penthouses, according to Mr. Blaustein.

“In the original plans, it was a glass building, a curtain wall from bottom to top, and we changed the façade, added more industrial elements, consistent with the cast iron architecture of the neighborhood,” Mr. Blaustein said. “It has a more industrial finish and the apartments will all have exposed columns.”

The core of the building will include 24 two- and three-bedroom units priced, roughly from $2 million to $5 million, with the townhouses priced at $3.9 million to $7.5 million and the penthouse duplexes from $7.85 million to $10.5 million. The building is slated for completion in 2015.

But just because IGI-USA has decided to go in a different direction with its design does not mean a complete break with the past. Or if not the past, at least a past. In this case, a mostly fictional one. The building’s marketing campaign will feature historically-inspired fictional characters that date—sort-of—to the era of the street’s namesake, James Renwick, born in 1790. In the words of the press materials, “The imagery integrates the historical, Victorian era of the Renwick legacy with the creative persona of today’s Hudson Square resident. The provocative images include a shirtless boxer sporting contemporary tattoos, complemented by an aristocratic-styled woman with modern-day nail-art.”

IGI-USA is so confident that the characters will appeal to the right kind of buyer—via Mr. Blaustein: “Our target market is people who are creative, different. We always joke that it might be a Wall Street trader, but he’s writing songs, he’s writing poems at night”—that the initial marketing campaign is not slated to include any renderings of the building’s interiors or exteriors, though the developer did share a select few with the Observer.

Among the interior and exterior details that can be expected: windows lined with wood trim and encased in aluminum, aged copper panels, walnut wide plank floors, stainless steel countertops and bathrooms with statuary marble tile in a herringbone pattern. Not included: the historical characters who can be seen enjoying the apartments in all the renderings.

“Sure there will be some criticism, some jokes, but I don’t care,” said Mr. Blaustein of the unorthodox campaign. “Aesthetically I think it’s beautiful and it will appeal to the clients we want.”

Or, as the marketing literature puts it: “Through an artistic mash up of culture, design and history that challenges today’s linear real estate marketing campaigns, 15 Renwick is, simply put, not for everyone.”

Correction: A previous version of this story stated that the lot area was 4,532 square feet. It is actually 9,014 sq ft. The Observer regrets the error. 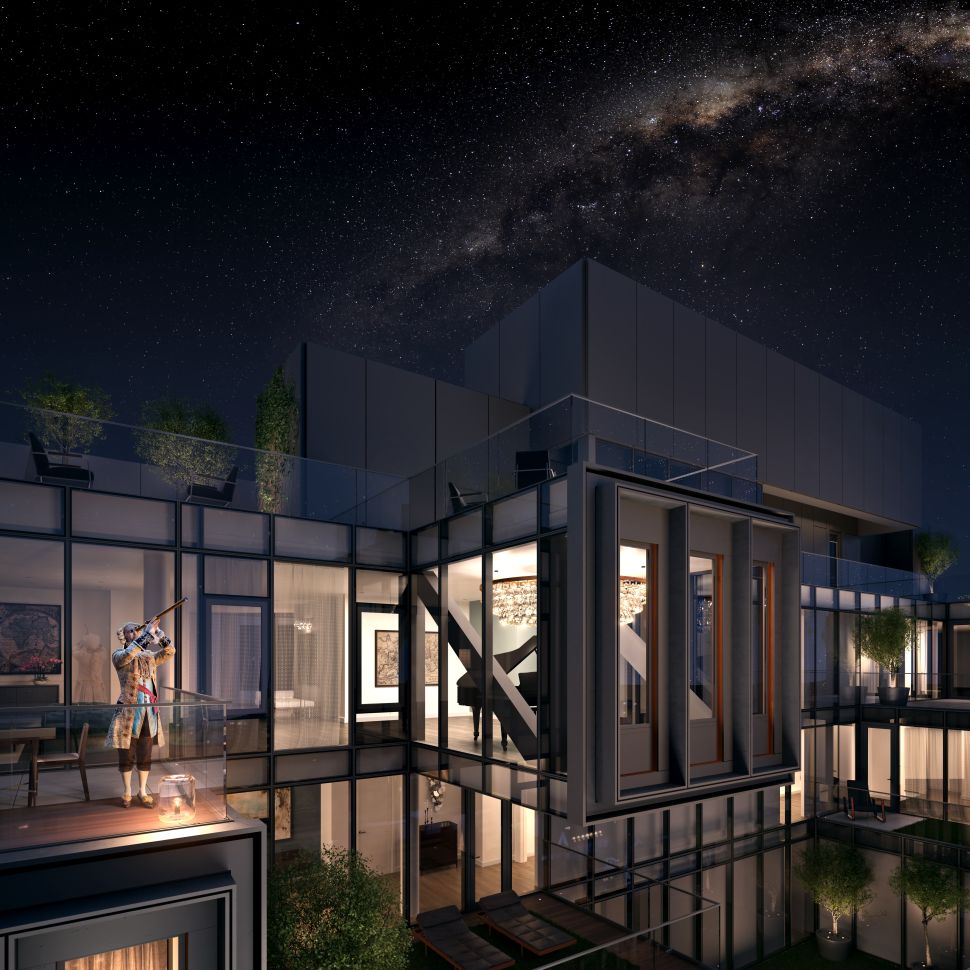