In a building in New York

not covered in vines

The most famous of whom

Last night, at a special exhibit preview, the New-York Historical Society was transplanted from its Central Park West location to a vibrant Parisian landscape, much like Ludwig Bemelmans’ leading lady in his famous children’s book series, Madeline.

“The young heroine he planted in Paris was perhaps not from Paris at all,” President and CEO of the Historical Society Louise Mirrer mused at a morning press preview, as she described the “spunky” red headed protagonist. “…We think secretly she was a New York kid.”

Although Madeline is often pictured in her iconic blue coat and broad yellow hat in front of the Eifel Tower, Mr. Bemelmans conceived the character in a Gramercy Park pub called Pete’s Tavern in 1939. In honor of the 75th anniversary of what is truly a New York story at heart, the Historical Society gathered many of Mr. Bemelmans’ works from across his life in a special exhibit open to the public today through October 19.

The exhibit features comic strips, fabric, menus, matchboxes, and ceramic plates that Mr. Bemelmans designed at different points in his career, as well as a couch stocked with Madeline books. The baby blue walls feature many New York scenes, like one of Central Park in autumn, which was featured on the cover of the New Yorker in 1954.

Mr. Bemelmans’ New York footprint is also visible at the Carlyle hotel on the Upper East Side, where the author/illustrator painted on walls and lampshades in the Bemelmans’ Bar in exchange for a year and a half stay with his family. Two of the lampshades were loaned to the exhibit.

Despite the clear impact Madeline has made on New Yorkers, they have not had the same effect on children in the country where the stories take place. Madeline is undoubtedly an American book and an American girl.

“I don’t think the setting matters so much to kids,” John Bemelmans Marciano, the grandson of Bemelmans, said in an interview with the Observer. Mr. Bemelmans Marciano has a five-year-old daughter of his own, and has continued his grandfather’s series following his death in 1962. “What’s inspiring for kids is that she doesn’t follow the rules and yet she’s still the hero.”

Deborah McGowan, who attended the special preview of the exhibit last night with her six-year-old daughter Sydney, said this is precisely why she thinks Madeline is a good role model.

“It’s a wonderful story of individuality and bravery,” Ms. McGowan said. “Even though you all might dress alike, you can come up with your own ideas to save everyone.”

Gazela Gond, 5, another attendee at last night’s event, said she only wants to be “sort of” like Madeline.

“I want to be myself too, but I also want to be a different person,” Ms. Gond said. She sported a brimmed hat, much like Madeline’s, but white, not yellow.

Many of the little girls — and a couple of boys — enjoyed the chance to hear Mr. Bemelmans Marciano read aloud the first of his Madeline stories, Madeline at the White House, which was originally a collaborative idea between his grandfather and Jacqueline Kennedy, shortly before his death.

At the end of the reading, Mr. Bemelmans Marciano described one of the last drawings his grandfather ever made. It was supposed to be part of Madeline and the Magician, where the magician finds the twelve little Parisian girls, and when he leaves, they think he has died and have a funeral. The drawing is of a cat in a fez, who Miss Clavel, the girls’ teacher, found outside. However, the cat is really the magician in disguise, so he can stay with the girls forever.

Mr. Bemelmans Marciano compared the drawing to the Madeline books. No longer in the same form or by the same author, but remaining in the hearts of little girls and the streets of New York forever. 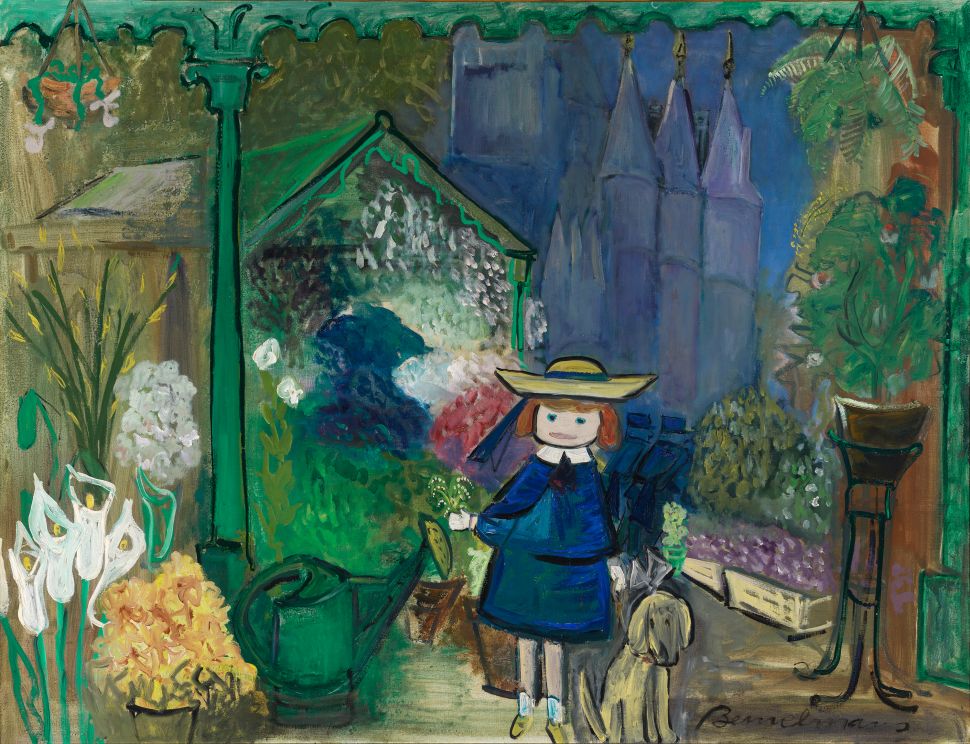