A gaggle of writers collected on the gay enclave of Fire Island last weekend to honor the midcentury poet and New York School progenitor Frank O’Hara. In no particular order, their pop culture doppelgangers might include: Carly Simon from a certain angle; a kempt, healthier Phil Spector; Lady Gaga; late-career Charles Durning; a pre-“Justified” Timothy Olyphant; and Sal Romano, formerly Mad Men’s closeted gay. O’Hara met an unceremonious end nearby. After a night of partying in 1966, he stepped in front of a beach taxi. Because he had the habit of dashing off poems during his lunch breaks as an associate curator at the Museum of Modern Art and stuffing them in drawers, his work had just begun to reach its readers. He’d inaugurated the post-war trend of mixing high and low cultural references, taking the piss out of the eternal with the seemingly ephemeral. Death and Lucky Charms, as one poet in the mix put it.

The Frank O’Hara Fire Island Pines Poetry Festival, organized by early-career poet Adam Fitzgerald, drew a crowd of nearly 200 for a two-hour reading of O’Hara’s work. In this environ, you don’t say young or old; you say ‘early career’ or ‘mid-career.’ Success is born out when your publishing record meets a certain cultural moment. That’s the most hopeful version, anyway. Mr. Fitzgerald’s book was published by Norton’s recently revived Liveright imprint, helmed by the editor Robert Weil. In its first incarnation, Liveright published T.S. Eliot’s “The Wasteland.” O’Hara’s work attempted to escape Eliot’s influence. He described his own poems as travelogues of the quotidian: “I do this I do that.”

“It’s hard to imagine being a poet in New York without knowing about Frank O’Hara,” writer and performance artist Eileen Myles said before reading O’Hara’s “My Heart,” in which he’d hoped to be “At least alive as the vulgar.” Ms. Myles lived on the streets of New York for four days as one of her past projects and didn’t shower for nine. J.D. McClatchy, editor of The Yale Review, Pulitzer finalist, wearer of blue driving moccasins, hadn’t been out to the island in years. “I’m marveling at the amount of money that must be spent on gym memberships,” he said as he wandered through a sea of tank tops. Mr. McClatchy collaborated with O’Hara’s sister to collect whatever audible scraps of the poet’s voice still existed and released them on CD in 2004. Another poet joked: “I was trying to figure out [which of my poems] to read for this crowd. I chose one called “Porn.” Saeed Jones, BuzzFeed’s LGBT editor, continued the ribbing. “It’s my first time on Fire Island. I went home with a guy and got lost on the way back.”

Kick along the Pines boardwalk until it morphs into a sandy path in the tangled Sassafras of the Meat Rack and you might get lost. It was a performative space in the “golden age of promiscuity,” the novelist Edmund White said, chuckling. It had been quiet earlier that day. Mr. White was picking through a plate piled with meatballs and a succotash as the sun set over the Atlantic. He’d spent almost twenty years living in Paris, leaving New York at the height of the AIDS epidemic in 1983. Now he’s teaching at Princeton.

“The thing about a poem is that you finish one and you don’t know if you’ll ever be able to do it again,” Paul Muldoon, the New Yorker’s poetry editor, said plaintively as he leaned back in a deck chair beside a pool where the early careerers collected in the darkness. “And it’s hard to know what the popular art forms are now…and I tend to accept a pretty broad definition of poetry.” Rap? “They’re manifestations of the same impulse…Poetry may not be in as a terrible state as we lead ourselves to believe.” The glowing rectangle was tucked in between the ocean and a well-appointed beach house owned by a hedge fund manager specializing in biotech companies. That afternoon, Mr. Muldoon had read O’Hara’s most famous poem, “A True Account of Talking to the Sun at Fire Island,” his Irish Brogue catching the poem’s r’s in the roof of his mouth. Mr. Weil, Liveright’s publisher, sat on a beach lounger lamenting the absence of some locals. A baked goods magnate had thrown a competing party that night. Their menu was Vichyssoise and halibut. “I’m never invited to those things,” he remarked. “But I don’t care. I’d rather be here. I mean, here we have Timothy Donnelly, who is going to be known as the best mid-career poet in America. So, no, I don’t need to be over there.” He paused wistfully. “I want to affect the culture.” Mr. Donnelly’s collection, The Cloud Corporation, received a two-page review in the New Yorker, which called him “the barreller-in-chief of the younger generation of American poets.”

“In the US, we’re a little afraid of being original,” said 89-year-old Kirby Congdon, the Pines’ resident poet. “And of not being successful for a very long time.” He wore a blue and orange Western shirt and black leather pants. He and his partner, who passed away about five years ago, worked hard to pay off all their homes so they could be free to shuttle back and forth from Key West to Fire Island. “Poetry has kept me young,” he smiled. Another writer was balancing a plate of food while handing out flyers with his manifesto: “Poetry spanning many centuries and continents shows us that poets have always disrupted the power structure….My most essential need is a good quality car, one I can sleep in, one with reasonable gas mileage, and is safe and reliable.” He found a spot in the dark to eat. Another soft-spoken gentleman said he’d been out on Fire Island the early morning that O’Hara died. “The thing is,” he admitted, “we didn’t really know who he was.” 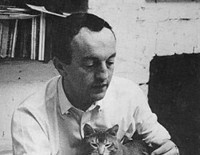