Recently, the Observer took a trip to the Sprayground showroom to meet designer David Ben-David, the designer on the forefront of the “bag renaissance” currently happening around the world. When Mr. Ben-David started Sprayground four years ago, backpacks were considered a mere accessory afterthought. Yet after graduating with a degree in graphic design from the School of Visual Arts, he launched Sprayground–the name a nod to the street art scene from which he hails. The backpacks initially shocked the fashion establishment but were quickly embraced by the hip hop community. Now even Walmart is taking a page from the designs. Many celebrity collaborations later (in October, they’ll be releasing a bag line with filmmaker Spike Lee), the backpacks are still hard to miss: they’re bold, heavy on pop culture references, and not afraid to offend. Neither, it seems, is Mr. Ben-David.

You’re the founder of Sprayground. What else do you do?
I’m creative director. Visionary of where we’re taking this ship. I handle production. Basically, as far as the ideas, it all flows from me.

Tell us how Sprayground started.
I love to travel with bags, from surfing to skating when I was a little kid, I always had bags. But I always had a black bag, so boring and generic, right? So then the idea came to me: let’s spice up this category. Kind of like what Swatch did to the watch industry. Or, like, what Skullcandy did to the headphone industry. There was an opportunity there. I just created one bag, the Hello My Name Is bag, because I was from the whole street art scene, where that sticker is very iconic in my world. So I put it on a bag and it sold out very quicky. So, shit, we got something!

And then what?
I was freaking out, because I was, like, am I going to be a one-hit wonder? I had to challenge myself. So I came up with the Money Stacks bag, [which] was better than the Hello My Name Is bag and everyone–every celebrity, athlete, musician–wore that bag. And ever since then we’re getting a lot of traction. And now we’re shipping these bags to 30 countries. So it’s very exciting. If you think about it, one bag changed really the whole bag market and made backpacks cool. ‘Cause people used to call them ‘knapsacks’ like it was some cheesy thing. [laughs]

Where did the inspiration for some of the other iconic bags come from?
Well, Spongebob and Ninja Turtles came to us. That’s a legit collaboration. With the Spongebob one, I told them I’m going to push the limits, I’m going to put a shark mouth on him. But that was already too extreme for them. So that bag had to get approval from the founder of Spongebob, which was the first consumer product to get his approval ever. And then we did the Ninja Turtes and I’m like, “I’m putting in that gold tooth,” and they’re like, “David, no way you’re getting that gold tooth.” So I was like, “Then forget it, I’m not doing it.” Well, now there’s a gold tooth and it’s one of the best selling bags this season.

Do you have a demographic in mind for your bags?
It started with me creating with what I liked, and I’m still doing that. I think that’s what works. It’s hard when you start looking to new demographics, and being like, “Okay, I want to start designing for them.” Because then you get lost. It becomes cheesy, and then people notice it, like, you’re trying too hard. If you stick to the trends they will bring you down. Even if I fail, I want to just continue doing whatever I feel in my gut. But what I will say is that I’m always trying to design for both young people and older people. So bags for every step of someone’s life.

You’re collaborating with Spike Lee for a line of bags. What’s that going to be like?
I like to work with people who flow like ; where it’s just organic. Because it’s hard working with other hyper-creative people. They don’t flow nicely sometimes. With Spike, he’s a little older, but he has such a youthful spirit. So that’s what we decided to do with the collaboration: one fun, pop-y colored bag, that really reflects his personality, and one sleeker, cleaner one that relates to his creative world.

How does New York City inspire you? The culture of the city, the people, the street art, etc.
Well, street art, there’s nothing here. There’s nothing. Maybe every now and then you’ll see some street art. But it’s dead. The city’s just grey and dark. So I look to the people: I like how you can sit on a corner anywhere and see 70,000 different types of people and styles. It’s like, instead of traveling, you can just stay here and see everything. It saves a lot of money.

Why do you think designer backpacks, Sprayground and otherwise, have become popular lately?
Why? Because of Sprayground, that’s why! [laughs] Even Givenchy came out with bags with designs on it. Because, you see, high fashion and street wear, they talk to each other. And even in the mass market–Walmart, K-Mart–a lot of companies have been knocking me off. But you can’t let it bother you. You just know you’re doing something right. I’m into world domination with these bags. 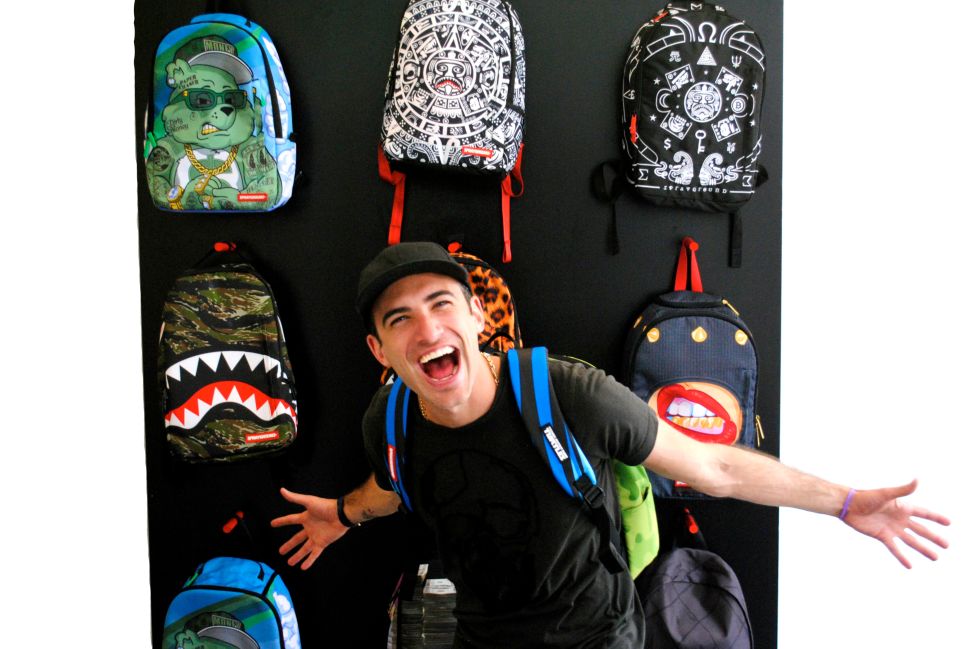