A deal between the mainline Democrats and the Independent Democratic Conference to eventually govern the State Senate together has halted some Democrat-fueled primary challenges to IDC members, but John Liu’s campaign is not going away.

Mr. Liu, the former city comptroller and mayoral contender trying to unseat State Senator Tony Avella, is still holding fund-raisers, racking up endorsements and hitting the campaign trail with the same intensity of a year ago, sans the unrelenting media coverage. Mr. Liu, who claimed today he held a fund-raiser every day this week, including one with Congressman and Queens Democratic Chair Joe Crowley, campaigned this morning with Councilman Rory Lancman in a sliver of central Queens that is actually outside the district.

Mr. Liu has a habit of campaigning beyond district boundaries. The logic behind the stop, according to Mr. Lancman, was that many people from Mr. Avella’s district flock to the Queens Valley Neighborhood Senior Center in Kew Gardens Hills.

“The thrust of my campaign has always been a desire to continue to serve in public service, to represent an area of Queens I have lived in my whole life,” Mr. Liu told the Observer. “I was excited to hear the IDC supposedly promising to come back and vote with Democrats. That just means I’ll be able to join the Democratic majority right away instead of potentially having to wait until 2016.”

Mr. Liu said he took the deal, announced last week by Gov. Andrew Cuomo and the IDC, at “face value.” The group of five breakaway Democrats, which includes Mr. Avella, currently governs the senate with the Republican Party, irking liberals like Mayor Bill de Blasio who want to see the Republicans tossed from power.

The power-sharing agreement will not take place until after the fall elections and some Republicans are confident they can hold onto enough seats to force the IDC to govern with them. While primary challenges to several IDC members are likely to evaporate after the agreement, Mr. Liu is remaining steadfast because the Queens Democratic Party has long resented Mr. Avella and wants to drive him out of office.

Mr. Lancman, an ally of the Queens machine, cast more doubt on the power-sharing agreement than Mr. Liu.

“Each IDC member, when they ran the first time, agreed and promised as Democrats that they would form a Democratic majority and that didn’t happen. So I’m not really interested in taking chances or hoping that promises that were made will be kept next year,” Mr. Lancman said. “I want my senator to be a part of a Democratic majority … and that’s what John offers.”

Labor unions helped broker the deal and it’s unclear if the many unions who have already endorsed Mr. Liu will lend their full support to his candidacy. Mr. Liu said today he hadn’t heard from any unions saying they’ll pull away from him and implied more endorsements would be arriving in the coming weeks.

While the tenor of the race, at least between the campaign spokespeople, has grown increasingly nasty, Mr. Liu was diplomatic at the campaign stop. He schmoozed with voters as an enthusiastic DJ played a version of “God Bless America” and mulled performing the Macarena, the 1990s hit dance move, with the seniors. (He ultimately decided not to interrupt them.)

Mr. Liu never mentioned Mr. Avella, who is not well known in the heavily Orthodox Jewish neighborhood. When he asked the group how many Democrats were in the room–Mr. Liu and Mr. Avella will face off in a Democratic primary in September–only about half the seniors raised their hands.

A campaign spokesman may have called Mr. Avella “one of the most ineffective legislators in Albany” just yesterday, but Mr. Liu declined to disparage the senator.

“We’ll have plenty to say. We have just under 10 weeks to go until the primary so I’m sure there will be much discussion and hopefully debates and we’ll let the voters decide,” Mr. Liu said. 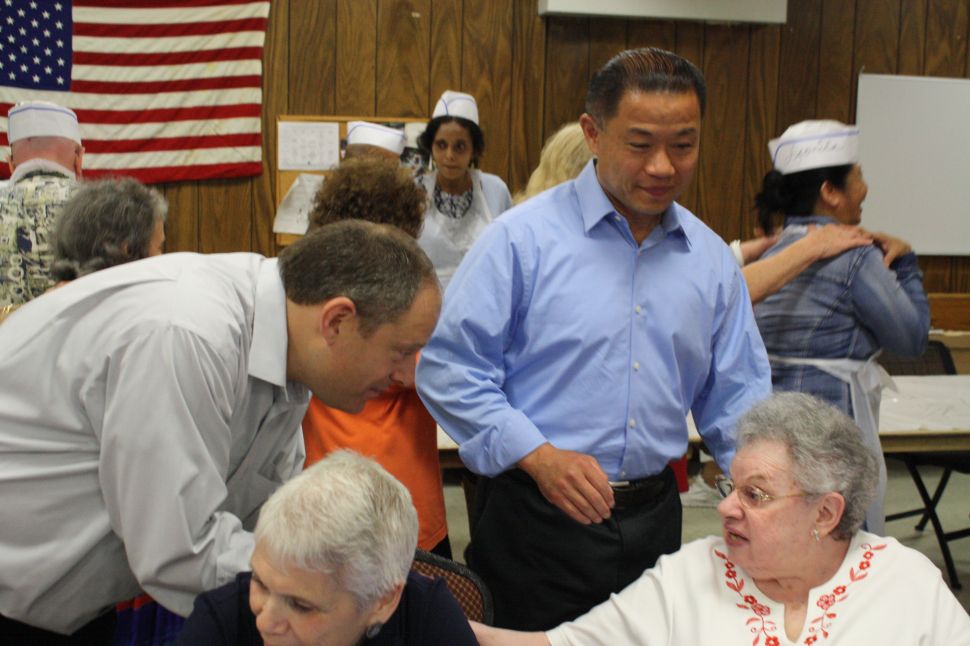