For a Jew, “Am I bringing you a bagel or bialy?” is a blessing masked as a question. But coming from my waiter at Russ & Daughters Cafe, the new sit-down expansion of the legendary Russ & Daughters Appetizing Store, the query was especially benedictive.

“Am I toasting your bagel?” was his next question. I nodded.

“I am toasting your bagel.” There was a clinical pause. “Am I bringing you butter or cream cheese?”

“I am bringing you cream cheese,” he said, and left to get to it.

This type of arch-Ashkenazic discourse when ordering is typical at the cafe, which opened in May and is owned by Josh Russ Tupper and Niki Russ Federman, the great-grandson and great-granddaughter of Joel Russ, an austere Galician Jew who began peddling smoked fish from a pushcart in 1907. The cafe is a momentous change in the four-generation business, the largest since 1923, when Joel moved Russ & Daughters from 129 Orchard Street to 179 Orchard Street, though that move was a mere relocation and not nearly as ambitious as this new venture.

Like many Russ & Daughters regulars, I find the endeavor thoroughly nerve-wracking. As Russ & Daughters: Reflections and Recipes From The House That Herring Built, the 2013 memoir by Mark Russ Federman, Niki’s father, makes clear, Russ & Daughters has survived as long as it has because of a dogged work ethic and by gang-pressing family members into counter positions, not by changing with the times.

Happily, at the new cafe, it’s as if Niki and Josh lifted the fragile arrangement of the family patrimony and carried it a few blocks south, like a silver tray loaded with irreplaceable crystal stemware, leaving it intact but not identical. Although the overall look is of a clean, modern, even elegant mid-century delicatessen, talismans of the original location remain—a cutting board hanging on the wall like art, phrases like Belly Lox and Chocolate Babka on the soffits over the alcoves, Joel gazing imposingly from his portrait near the coat rack.

Most important, the spirit of Joel and his daughters—Hattie, Ida and Anne—speaketh in the menu. Devised by consultant John Stevenson and Stephane Lemagnen in collaboration with Tupper and Federman, the one-sheeter doesn’t stray far from the shtetl. No meat is here, but its absence is not felt as a loss—how could it be when gaspe nova smoked salmon, silky and thin as a pair of angel’s panties, with a bagel and schmear (The Classic, $16) arrives with sliced sturgeon so sweet it’s called candy (Mensch, $22)? Russ & Daughters has it all: Chilled borscht that puts Veselka’s to shame, small knishes of great tenderness that trump Yonah Schimmel’s, matzoh brei that would make my grandfather kvell. For the Phi Beta Kappa frat boy there’s Schmaltz and a Shot, a rectangle of herring and a swallow of vodka, served just the way Alexander Schneider, the great Litvak violinist, used to enjoy his in the backroom of Russ & Daughters in the 1950s. No, not absence but the presence of the past is felt here.

Innovation is found, but it’s reverent, gradual, filial. Eggs, new to the Russ & Daughters universe, are offered many ways, but served best in the “Lower Sunny Side,” their yellows spilling onto a warm latke and the cool surface of the nova. Elsewhere, this dynamic twixt warm and cool is explored in a Hot Smoke/Cold Smoke nosh ($13), a spread combining Scottish smoked salmon with kippered salmon, silk and cotton, respectively.

Desserts at the cafe shouldn’t be ignored. Joel’s first business was a candy store, and Russ & Daughters has always done strange double-duty as a fish store and candy shop. At the café, chocolate babka, the king of breads, is made into French toast, while halvah is turned into ice cream, then topped with sesame and salted caramel. For Jews, Saturday is Sabbath, but this sundae is sacred, too.

But what would the old Jews think, that generation of suspicious immigrants who sharpen soft w’s into hard v’s and turn the voiced dental fricative th, as in father, to fudder—those Jews who kept Russ & Daughters afloat all these years? They’d probably eye the herring—made in the kitchen, served on a handsome cutting board— and send it back. “Vat do you tink, I’m a schlemiel? I vant one from the middle of the tray.” But most of those colorful old-timers are gone now, and with them the last living memories of the Jewish Rialto, of herring wrapped in the New York Herald, of butterfish and kapchunka, of the pushcarts of Orchard Street, of Russ & Daughters’ bygone neighbors like Tanenbaum the Baker, Leo the Butcher and Ershowsky’s, with its window full of turkey tails. To catalogue what has been lost, even to try, would break your heart.

But just as the cafe succeeds by wearing its history lightly, it would be wise not to dwell on the posthumous judgments of the old alte kakers, farbisseners and balabustas. Russ & Daughters Cafe isn’t for them. It’s for their daughter’s daughter’s daughters and sons. Perhaps it’s the waiter rubbing off or just latent cultural Jewiness brought forth by so much lox, but I’ll end with that most Semitic of rhetorical flourishes, the answering of one’s own question:

“Are you coming back to Russ & Daughters Cafe?” 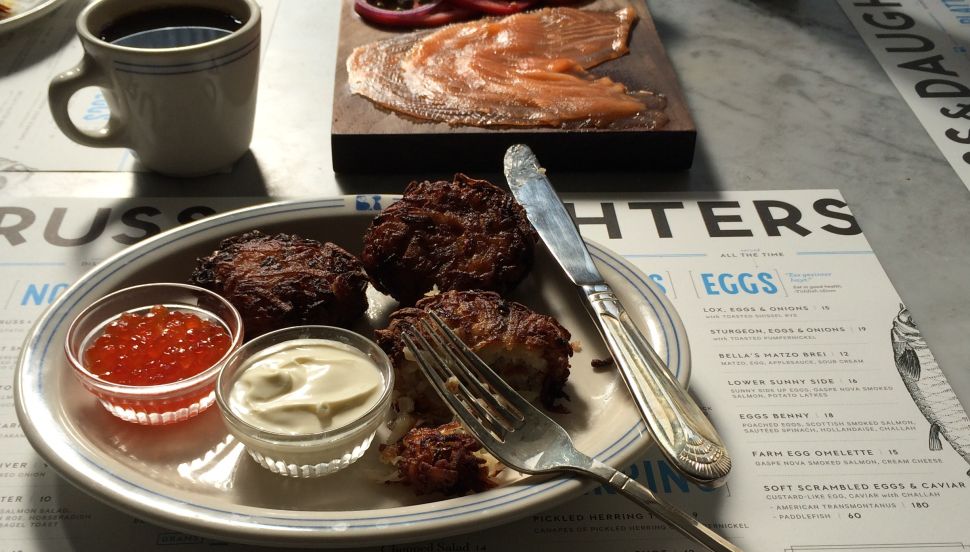