TRENTON – In 2011, standing side-by-side beneath the bare bones girders and iron scaffolding of a half-built Revel Casino, Gov. Chris Christie and Senate President Steve Sweeney (D-3) doubled-down on a bet placed 30 years earlier: that Atlantic City, once imagined a Las Vegas-style getaway for the Northeast region but since fallen on hard times, could survive as New Jersey’s sole gambling mecca.

It was a double-down bet because the state had gambled on the prospect once before, in the 1970s, when it first legalized gambling and passed its original casino laws. But not since then had New Jersey updated its stance on the subject, and both Gov. Christie and Sweeney thought it time to reinforce the state’s commitment to the troubled city. This time around, the vision was to reinvigorate the debilitated resort town — to “return Atlantic City to the ranks of the best destinations in the world,” the governor said — by drafting an ambitious legislative package geared toward supporting its gaming industry.

Part of the package, signed that day amidst union leaders and Atlantic County lawmakers, called for the creation of a state-controlled gaming district in the heart of the city’s downtown (S-12). Another part overhauled the state’s regulatory structure for casinos, something that hadn’t been done since the laws were first written (S-11). Still another part included the very shell of the building the latter two bills were signed in that day — resumed construction on the Revel, Atlantic City’s 53-story, 6.3 million square foot behemoth seaside attraction, made possible by the New Jersey Economic Development Authority’s approval of $260 million in tax-increment financing to support infrastructure improvements.

And, finally, just to show how serious they were about it (and to give the city some time to get back on its feet), they threw a moratorium into the pot: no talk of expanding gaming outside Atlantic City until 2016, Sweeney announced.

Well, it hasn’t quite been that long, but New Jersey’s top lawmakers — with Sweeney leading the way — seem to already be looking to cut their losses on that bet.

Today, Atlantic City is in somewhat dire straits, as has been documented over the last two weeks. Out-of-state competition — Pennsylvania, New York and Maryland all boast casinos in many places more accessible to New Jerseyans that AC — together with market oversaturation in Atlantic City itself — heavy investment over the last several years has packed the city with gambling halls — has led to a contraction in Atlantic City’s casino-dependent economy. Gaming revenues have fallen consecutively, now down about $2.8 billion since 2006. And, as of this week, a total of four casinos have announced closures by the end of the year, leading to the loss of nearly 8,000 jobs.

The Revel, not two years old but already twice bankrupt and seeking a buyer, is one of those casinos.

What is clear, according to most lawmakers and gaming experts in the Garden State, is that something has to change. According to Ben Dworkin, Director of the Rebovich Institute for New Jersey Politics at Rider University, Atlantic City’s “fortunes are changing very quickly, and no one is sure how long and how viable a business model the city is going to remain as a gambling capital. With competition north, west, and south of it, it becomes a real challenge.” Sweeney himself has acknowledged this, and last week the South Jersey democrat told The Record he’s had private discussions with officials in North Jersey — many of whom have long argued for an expansion of casinos and gaming into that part of the state – for the past year about allowing casinos in places like the Meadowlands and Hudson County.

But what’s less clear is whether New Jersey politicians should have seen this — the rapid-fire boom and bust of Atlantic City’s casino industry — coming, and to what extent their recent and quite sudden turn-around on the issue represents a true, earnest response to changing market forces in the region, as opposed to a quick dash to save political face. It’s probably a little of both, creating what Dworkin calls a “kaleidoscope of politics,” where “every fiscal quarter fortunes are changing and the players are changing, and therefore policymaking may have to change as well.”

If it is a kaleidoscope, then Sweeney, who sits at the top of the list of powerful state legislators with political ambitions for higher office, and whose new-found willingness to bring gambling north of southern borders contradicts previous efforts to insulate the city and in the process win bids for union labor in South Jersey, is likely the swirling mass of color at its center.

A top Democrat in the state senate and a potential gubernatorial candidate in 2016, Sweeney has more reason than most to be worried about maintaining a positive statewide presence. Since taking his seat as head of the senate in 2010, the former steelworker-turned-lawmaker has been slowly positioning himself, many say, for a run at the front office. He’s built what appears to be a strong and productive partnership with Gov. Chris Christie, drafting legislation on big-ticket issues like public pension and benefits reform.

Of course, whether or not Atlantic City’s turmoil puts Sweeney in a better or worse position ahead of a gubernatorial run in 2016 depends on how you look at it. His closer allies, as well as those who’ve long awaited gaming forays into the state’s upper reaches, applaud the senate president’s change of heart, calling it an example of pragmatic politics. “I think [Sweeney’s] done a lot to support the industry [in Atlantic City], but they’re looking at the numbers — these are business people — and they’re seeing that Atlantic City is not doing well,” Assemblyman Ralph Caputo, a 20-year Atlantic City casino executive veteran and chairman of the Assembly’s Tourism and Gaming Committee, told PolitickerNJ last week. “It’s something that has to occur whether we like the gaming business or not.”

Caputo, along with pro-gaming lawmakers like state senators Ray Lesniak (D-20) and Paul Sarlo (D-36), is an ardent supporter of bringing casinos to the north. Together they make up the team of brokers that have worked to bring gambling to places like the Meadowlands — and, now, potentially Jersey City — in an effort to redirect some of the money that all too easily makes its way out-of-state to places like Pennsylvania and New York. No one has abandoned Atlantic City entirely — each have emphasized that at least a portion of the revenues generated by future casinos in the north must make its way south to support Atlantic City’s economy — but all agree that the dream of Atlantic City as New Jersey’s sole gambling mecca is gone.

Assemblyman John Burzichelli (D-3) agrees. Burzichelli helped draft the casino kickstarter legislative package signed by Christie in 2011, but now concedes that it’s time to rethink New Jersey’s approach. The 3rd district assemblyman, whom statehouse whispers place on the “a” list of Sweeney’s chief of staff potentials, says he’s all but certain a voter referendum on the issue will finds itself on the ballot next year.

“He’s in a lot of places, and the one strength that he has is he knows when to move with regards to changing facts and circumstances,” Burzichelli said of Sweeney. “He’s challenged himself to be a leader when change comes, as opposed to standing in one place and saying no, no, no. So after five years, when we might not have thought we’d be having frank discussions about this, circumstances have changed and it’s now in our best interest to talk about it sooner.”

A few moments later he pondered: “Does that benefit him? You know, who knows? But I think it stands as a very clear example of his ability to be fluid, and as the landscape calls for it, to move.”

But opinions tend to vary as one moves further from Sweeney inner support circle. Many others, who are equally ardent supporters of a north Jersey gaming industry, think the state is way past due for a serious discussion about casino development outside the confines of Atlantic City. It was past due even in 2011, when Sweeney and Christie tried championing an AC comeback, they say.

“Listen, I kept telling them this day was going to come. When I was governor in ’05 I came close to getting a deal with them to allow spot casinos at the race tracks up in the Meadowlands, state Senator Dick Codey (D-21), a chief architect of the state’s first casino laws, told PolitickerNJ. “And they would run them, get a certain percentage of the money based on their gross earnings down in Atlantic City. And now a days I run into some of them and they say ‘you know, Guv, we should have taken the deal in 05, we’d be in a better position.’ But it is what it is.” 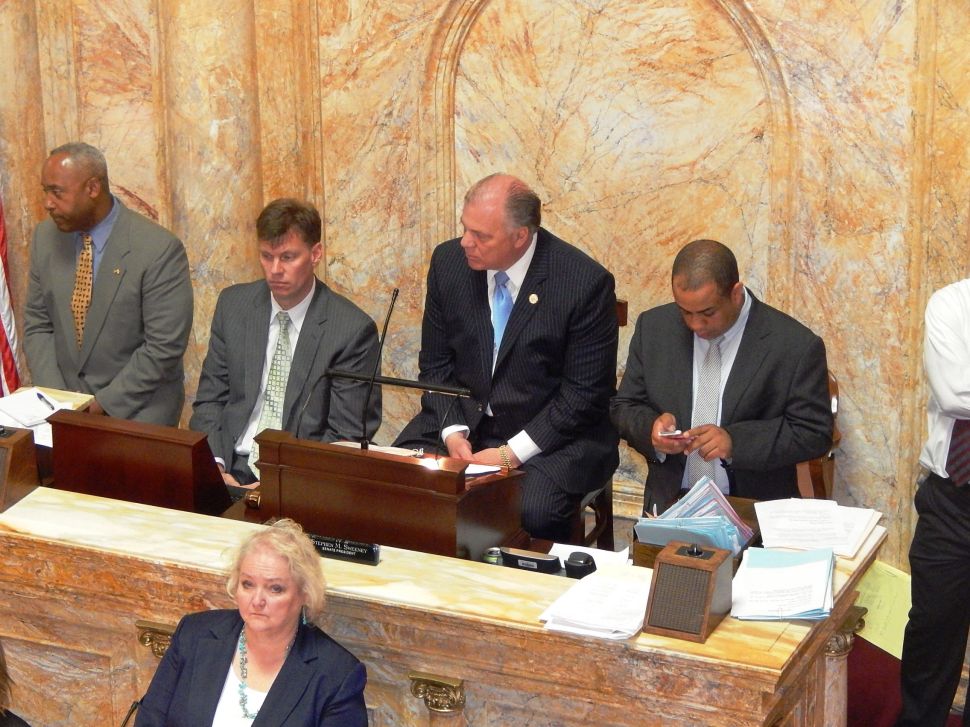