NEWARK – In the midst of the blazing heat outside of the New Jersey Performing Arts Center (NJPAC) on Tuesday’s inauguration day in Newark, newly-installed Mayor Ras Baraka could look out from the stage and see members of an important political force that helped him win: organized labor.

But almost immediately after experiencing the triumph of inauguration day, the harsh realities facing Newark ruined the reverie, presenting Baraka with a dire fiscal situation that could compel him to clash with his labor allies.

A $93 million dollar budget deficit looms over Newark, with state officials recently inferring that Trenton may take over the city’s finances not long after revelations of fiscal waste and abuse at the now-shuttered Newark Watershed Conservation and Development Corporation (NWCDC) in a State Comptroller’s office report.

The budget crisis has led to Moody’s Investors Service downgrading Newark’s long-term debt rating, as well as a serious search by Newark officials to find ways to generate more revenue to close the budget gap. With state transitional aid not necessarily forthcoming in force in light of the state’s own fiscal woes, one unpleasant possibility is cutting city employee jobs to save money. These jobs could potentially include positions in the police and fire departments, sanitation, teachers and other city jobs – in order words, jobs held by members of the unions that played such a key role in getting Baraka elected.

According to Giblin, Baraka’s labor support could remain solid as long as unions are involved in the decision-making process.

“I don’t think that there any illusions about the financial dilemma that Mayor Baraka faces as he begins his term. I think that what he has to do is have the labor movement at the table as allies,” Giblin told PolitickerNJ.com. “For example, the $93 million budget deficit is looming over us. Perhaps we could push for legislation that the debt could be paid down not in one year, but three years or four years. Another potential solution is Newark’s parking lot tax, which generates about $15 million a year and was designed to spur economic development. Perhaps the tax could be re-focused to plug some holes in the city’s budget, including areas that affect city services.

“I feel that [Baraka] will be very sensitive to the working men and women who either work for the city or else reside in the city when it comes to budget matters. He needs to educate folks about what he’s actually inherited,” Giblin added. “He’s made a commitment that he’s going to take on a lot of challenges during the first 100 days. It’s important that the mayor and the council be on the same page at a time like it, which is why I think that it was so important that Mayor Baraka got a majority on the council. I think his mindset is to get more people in the mix and look for advice. I think that should bode well for him down the road.”

“Councilman Osborne thinks its premature to comment on something that hasn’t happened yet, but it is obviously true that $93 million is a significant budget deficit,” said Crystal Harvey, Osborne’s chief of staff. “Mayor Baraka is combing through the budget line by line, and public sector unions will be at the very bottom of the list if cuts are necessary.

“Labor played a tremendous role in the May and June elections to give Mayor Baraka a victory and a majority on the council,” Harvey added. “At the end of the of the day, the mayor and the council will be on the same page when it comes to dealing with budget problems.” 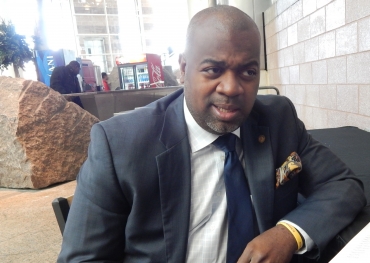