“Empty suits don’t bother me. Cory Booker is a very nice man, but he was a total failure, as we are now seeing, as the mayor of Newark,” said Yudin about Booker, who grew up in Harrington Park and served as the mayor of New Jersey’s largest city from 2006 to 2013. “The residents of Bergen County now understand his total failure as the mayor, and they will pay no attention to anything he has to say. If anything, [Booker] will hurt [Tedesco], not help him. His endorsement clearly is meaningless.”

Yudin elaborated on why he asserts that Booker was a “complete failure” as Newark’s mayor.

“Booker tried to make the impression that he was turning Newark around, and that Newark was doing very well. We now see Cory Booker’s failures relative to street crime and everything else that he espoused has turned out to be nothing more than smoke and mirrors.”

When asked by PolitickerNJ.com about the considerable development of Newark’s downtown in recent years, Yudin implied that Booker was not primarily responsible for the city’s downtown growth.

“[Booker didn’t have to deal with the schools, because the state gives Newark [millions] of dollars a year for education. So it’s actually all of the people of New Jersey that resulted in the economic revival of Newark. That’s not because of Cory Booker,” Yudin said. “It’s especially true because of the taxpayers of Bergen County, who gave far more money to Trenton that we get back in Bergen County. That money goes into places like Newark, and we get screwed.”

Tedesco campaign manager Michael Pagan welcomed Booker’s comments made to PolitickerNJ.com on Monday that he is “going to come in very hard” for Tedesco, Paramus’ former mayor, as he tries to defeat Donovan.

“Cory Booker’s endorsement is great for us,” Pagan said. “It will help us get out the vote and raise the necessary funds to win on November 4.”

But when asked by PolitickerNJ.com on Monday about Newark’s progress 47 years after the July 1967 civil unrest that some say still sears the city’s soul, Booker pointed to his role in Newark’s recent redevelopment efforts.

“You walk around Newark and you see extraordinary things continuing to happen. The first new residential and office towers going up in 50 or 60 years. The first new hotel going up in 40 years,” Booker said. “Neighborhoods, parks, housing and supermarkets – it’s an extraordinary movement forward. Newarkers are focused on the future, and I think that Newark is going to continue to rack up successes.” 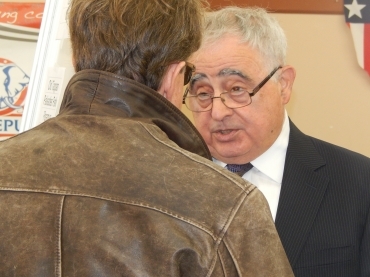