PARAMUS – Bergen County Freeholder Jim Tedesco, Paramus’ mayor from 2003 to 2010, remembers when he made what he called “a handshake deal” to renovate and expand the 35 Plaza shopping complex on Route 4. Now running as the Democratic candidate for Bergen County Executive, Tedesco returned to 35 Plaza on Monday and unveiled his economic development program, hoping to shake up Bergen’s economy in the face of stiff regional competition.

“Bergen County is at an economic crossroads. Businesses and jobs are leaving Bergen County for Rockland County [in New York state] and other New Jersey counties,” said Tedesco, flanked by Democratic allies such as state Assemblyman Joseph Lagana (D-38) and Bergen County Freeholder Chairman David Ganz as well as members of the Sauer family, whose late father Alvin worked with Tedesco to revive 35 Plaza. “Recent reports have shown that while the state’s commercial market is growing slowly, vacancy rates have increased in Bergen County. We cannot afford to continue the status quo. Something needs to be done, and it needs to happen right now.”

Tedesco’s plan to boost Bergen’s economic development involves several key components. In terms of structure and resources, Tedesco hopes to create a task force if he is elected that would be comprised of local business leaders, investors, labor leaders and elected officials that would meet regularly to discuss ways to both keep businesses in Bergen and attract new firms to set up shop in the county.

The task force will team up with local municipalities, the Bergen County Economic Development Corporation (EDC) and the Bergen County Improvement Authority (BCIA) to achieve this goal, according to Tedesco’s plan. In line with this objective, Tedesco proposes increasing the current number of EDC employees from three to six.

Tedesco’s economic development plan also outlines the creation of a real estate database designed to provide a readily accessible list of all available commercial properties in Bergen County for businesses looking to relocate, as well as the creation of a start-up incubator program. The incubator program, meant to be a public-private partnership, will help new companies by reducing overhead costs through shared resources,and requires participating companies to stay in Bergen County for 10 years after graduating from the program.

During a news conference announcing his economic development plan for Bergen County, Tedesco also detailed several incentives he hopes to use to entice business to come and stay in Bergen, New Jersey’s most populous county, which has 70 municipalities, also the highest in the state.

“We will partner with these municipalities to offer incentives like tax abatements, tax credits, and favorable lending opportunities,” Tedesco said. “All of these incentives will have corresponding agreements that will require businesses to commit to staying in Bergen County.

“A top initiative will be how we take aging commercial space and turn it into state of the art health care buildings,” added Tedesco, noting how modernizing commercial office space can help Bergen profit from the growing private health care market. “Bergen County [which is home of five acute-care hospitals] is well-positioned to be the heath care hub of the region.”

“Just two years ago, [Donovan] talked about Bergen County being a tourist destination, and that tourism will fuel economic growth. Tourism is not where our economic growth is for Bergen County,” Tedesco said. “In fact, many Bergen county hotels did not sell out for the Super Bowl. This plan is about the future. Elections are about the future. Bergen County is our home, and we have our work cut out for us if we want to help it grow and economically prosper in the rapidly-changing 21st century.”

“Tedesco’s phony plan does not contain a single documented fact supporting any of his claims. Tedesco’s proposal to drastically increase corporate welfare, forcing local property taxes even higher, is just another election year stunt to help him raise campaign money from big business at the expense of local schools, seniors and working families,” countered Mark P. Campbell, campaign spokesman for Donovan. “The simple fact is, Kathe Donovan as County Executive has and is helping to create 49,000 new, good-paying construction and other jobs for Bergen County’s working families, leaving Tedesco with nothing much to say.” 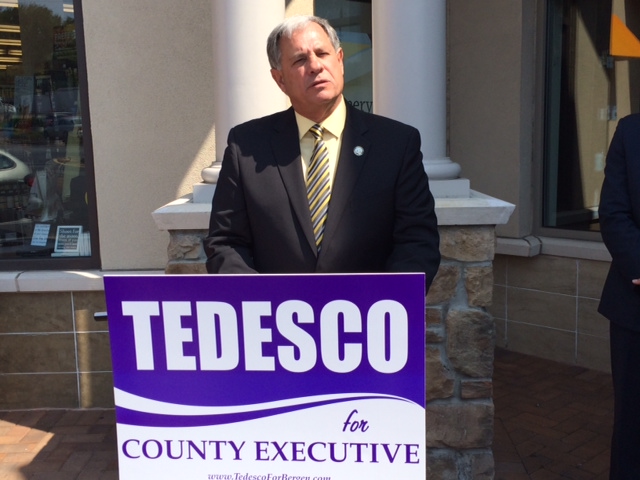