“This is once again and example of what respect and cooperation makes possible,” Mr. de Blasio said at City Hall. “When you get rid of that negative and replace it with real respect, real cooperation, real dialogue, it’s amazing how well things can go.”

The mayor, a Democrat, said the deal with the 100,000-member union reflected his “progressive values” and implied he was working in a spirit of comity that was not found between his predecessor, Michael Bloomberg, and labor unions.

Mr. de Blasio, appearing with DC 37 members clad in green, the union’s color, said that he patterned the agreement on an earlier deal reached with the United Federation of Teachers. The 10 percent raises will be granted over seven years, offset by what the de Blasio administration called “significant savings.” Raises increase in the out years of the deal, culminating at a 3 percent jump in 2016, and there are no years without raises.

The deal begins retroactively in March of 2010 and expires in July of 2017, in the summer Mr. de Blasio is likely to seek re-election. The gross cost of the agreement is $1.75 billion.

The cost will be offset through healthcare savings the city and the Municipal Labor Committee have already agreed to find — $3.4 billion in health care savings through the 2018 fiscal year, Mr. de Blasio said, and $1.3 billion in recurring savings in years after.

Like with the UFT deal, specific health care savings have yet to be defined.

With this agreement, more than 60 percent of the city’s workforce have reached contract agreements with the city, the mayor said. Heading into 2014, all had expired contracts.

“I don’t know what to say because it’s been a long time coming,” said Lillian Roberts, the executive director of DC 37. “Thank you, Mr. Mayor.”

The tentative agreement, which must be ratified by the Municipal Labor Committee, includes a new committee of DC 37 members and city representatives who will make recommendations on how to increase recruitment, retention and promotion of minorities and women in DC 37 jobs. The city and DC 37 also agreed to work together to find workplace savings. Mr. de Blasio also said he will look into cutting down on private contracting to further cut costs.

“Think about what DC 37 members do, what they mean to this city,” the mayor said, calling the union the city’s “glue.” “They deserve a contract as good as them.” 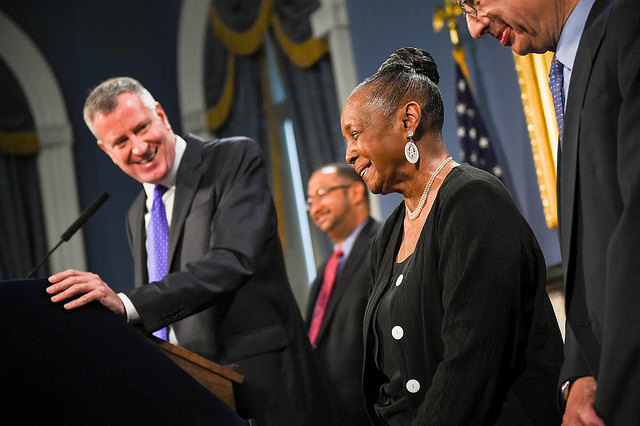