Mayor Bill de Blasio made an in-person appeal for Pope Francis to visit New York City Monday, during a Vatican meeting that also touched on immigration.

“We understand that no one has a more difficult schedule in the world than the Pope, and nothing definitive was decided in the meeting,” Mr. de Blasio told reporters after the meeting, according to audio released by his office. “But Cardinal Parolin was very open to the request.”

While the pope has “literally the most global of schedules,” Mr. de Blasio said he’s been working with New York’s Cardinal Timothy Dolan for months to arrange a visit.

“I think it was very important for the mayor to come here and make this request,” Mr. Hackett, the U.S. ambassador, said, adding other elected officials including the president had as well. “For the mayor to come specifically to invite the Holy Father to New York City, that was important.”

The mayor and Mr. Parolin also discussed immigration, including New York City’s own response to dealing with the population of undocumented immigrants here.

“He was interested in what the mayor had to say about the experiences that New York has with immigrants — the new identification card that really captured his interest,” Mr. Hackett said.

The mayor, a lapsed Catholic, said he and the Vatican see eye-to-eye on immigration and income inequality issues.

“Of course, the church has been a leader in calling for compassion and support, and a humanitarian response as opposed to a political response to the crisis,” Mr. de Blasio said. “And I emphasized that New York City agrees with the position of the Holy See, that we have to embrace all immigrants.” 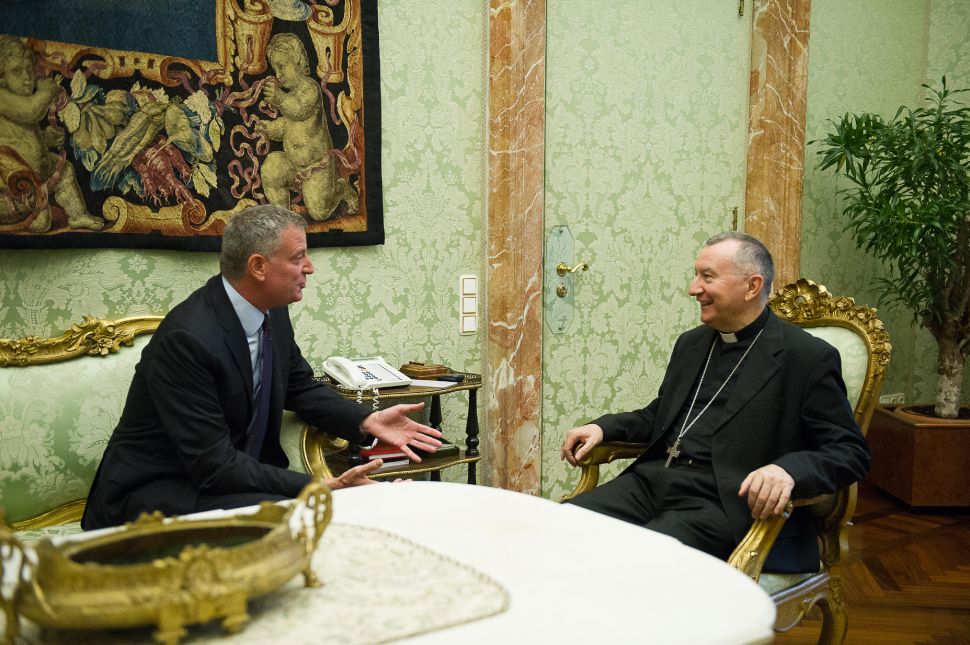