When it comes to turning key initiatives into law, Mayor Bill de Blasio has been  bringing the process on the road — transforming the ho-hum bill hearing and signing routine into a multi-day event.

While his predecessor typically signed bills into law immediately following a legally required public hearing, Mr. de Blasio has three times separated the City Hall hearings from the actual signing of the legislation. That allows for the bill signings to be held in more photogenic spots packed with supporters — a small business or a street corner set to be made safer, rather than the cramped Blue Room in City Hall.

“City Hall has a pretty strong gravitational pull, and it’s important for the mayor to be out in real neighborhoods where policies like these will actually be felt,” Wiley Norvell, a spokesman for Mr. de Blasio, told the Observer.

But separating the hearings and the signings also means the press had twice as many events to cover about the passage of paid sick time, Vision Zero, and municipal identification card laws — doubling Mr. de Blasio’s victory lap.

“He gets two bites of the apple,” said George Arzt, a veteran political consultant and former City Hall reporter.

After holding a hearing on the paid sick bill, the mayor got another day of media attention on the issue when he signed the legislation at a hip Brooklyn workspace, complete with a visit to an artisinal ice cream factory — not a step mentioned in the famous Schoolhouse Rock explainer of how a bill becomes a law.

And when the City Council passed legislation as part of the mayor’s Vision Zero transportation safety push, the mayor held a well-covered City Hall hearing and then, days later, signed the legislation near a Queens intersection where an 8-year-old boy died after being struck by a car.

For municipal identification cards, Mr. de Blasio even jazzed up the hearing process yesterday — holding it in the council chambers to welcome a bigger crowd, and setting up a handshake line for those in attendance. A day later, the I.D. cards are in headlines again as he signed the bill surrounded by supporters in a Brooklyn plaza.

The multi-day display is a marked departure from previous administrations.

“Usually, mayors hold the hearings and sign the bill there, or, in rare occasions where there’s opposition and someone makes a good point, previous mayors have said that they will not sign the bill, but they will consider the options on the bill,” Mr. Arzt said.

Former Mayor Michael Bloomberg was persuaded in 2007 by testimony at a hearing on pedicab regulations to change his mind, postpone a decision and ultimately veto a bill he had originally supported.

But Mr. de Blasio isn’t taking extra time after the hearings to consider whether to sign the bills — they’re all signature issues of his.

“They’re using it as visuals for press conferences and announcements. They get out of City Hall to go into the communities,” Mr. Arzt said.

That draws a contrast between Mr. de Blasio and his predecessor, who was knocked for being too City Hall-centric and was not a fan of things like town hall meetings, Mr. Arzt said.

“There is a juxtaposition here between the two, that demonstrates that this is a much more community-oriented mayor, and that’s what he’s trying to show,” Mr. Arzt said.

The big spectacle of the signing also allows for members of the City Council — who are invited to speak about the bills they passed — to bask in the limelight.

“It makes the people in the City Council feel included,” Mr. Sherrill said. “I don’t think it’s an overstatement to say that many previous mayors couldn’t conceal their disdain for the City Council.”

In the case of municipal identification — widely covered when Mr. de Blasio rolled out the idea, when the council introduced and finally voted on it, at the mayor’s hearing and then again for the signing — Mr. Sherrill pointed out that those who will benefit most from the measure may not follow the news each day.

“It’s almost a community organizing tactic, to repeat the message and to get as much focus on it as possible so that the audience that’s targeted for this change in policy learns about it,” he said.

Some of it, though, is more political than practical.

“I think that he also is working very hard at creating the image of not just being an activist mayor, but being a mayor who is actually achieving things,” Mr. Sherrill said, with an eye toward 2017. “It’s the beginning of a promises made, promised kept campaign.”

And just because the bill is signed doesn’t mean the press events are over.

“[He] can hold another meeting, another press conference, when it goes into effect,” Mr. Arzt said. 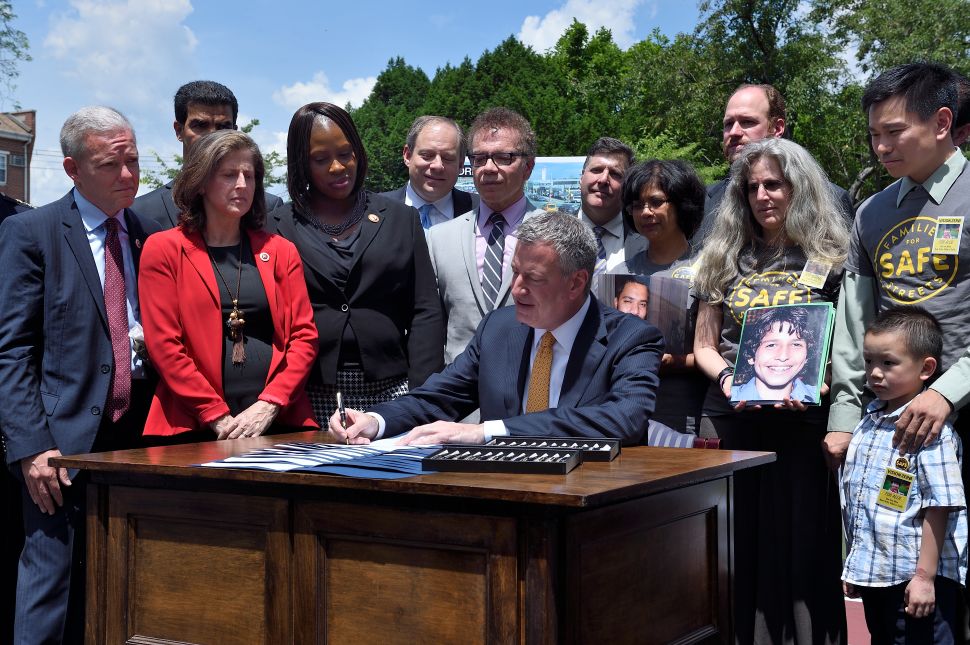