The costume character situation in Times Square has reached new heights with a slew of arrests of characters this weekend, including of a Spider-Man who allegedly punched a police officer.

And now, it has even grabbed the mayor’s attention.

“I think this has gone too far, and it is time to take some real steps to regulate this new reality,” Mr. de Blasio said. “I know some of my colleagues in the City Council are looking at legislation that we could move quickly to create licensing and rules.”

He added: “Once we have regulation, we will be able to say very clearly to everyone who does that work, ‘Play by the rules or you wont be working here anymore.'”

One character who apparently wasn’t playing by the rules was Spider-Man—real name Junior Bishop, 25, of Brooklyn—who the New York Times reported was arrested following a confrontation with an NYPD officer Saturday.

Mr. Bishop allegedly punched the cop in the face after the officer interceded on behalf of a tourist who was being pressured to hand over more cash to the character for a photo they’d taken, according to the Times.

Mr. de Blasio also said that any kind of harassment was unacceptable and called for enforcement of existing laws.

“It is not appropriate for anyone to demand a certain a mount of money from a passing tourist and harass them in that manner, that is not appropriate. And until we have new regulation in place we will enforce in any situation when that occurs,” he said.

Legislation to regulate the characters is currently being drafted by Councilman Andy King, who aims to create accountability and regulate the industry through a licensing scheme. The initiative has also garnered wide support from other City Council members and from Mr. Bratton himself as well as from organizations like the NYPD’s Sergeants Benevolent Association, among others.

“It makes sense because it establishes identity and it regulates what takes place, so we don’t have people just walking around in costume,” Sergeant Ed Mullins, president of the union, said in a conversation with the Observer. “You have to remember, if you’re out there wearing an Elmo costume today, somebody else might be wearing an Elmo costume tomorrow, so we don’t know who you really are.”

“Times Square is one of the busiest areas of the city,” Mr. Mullins emphasized. “Anything that is going to make things easier, that will help as far as law enforcement goes makes sense. I think it is a good piece of legislation.” 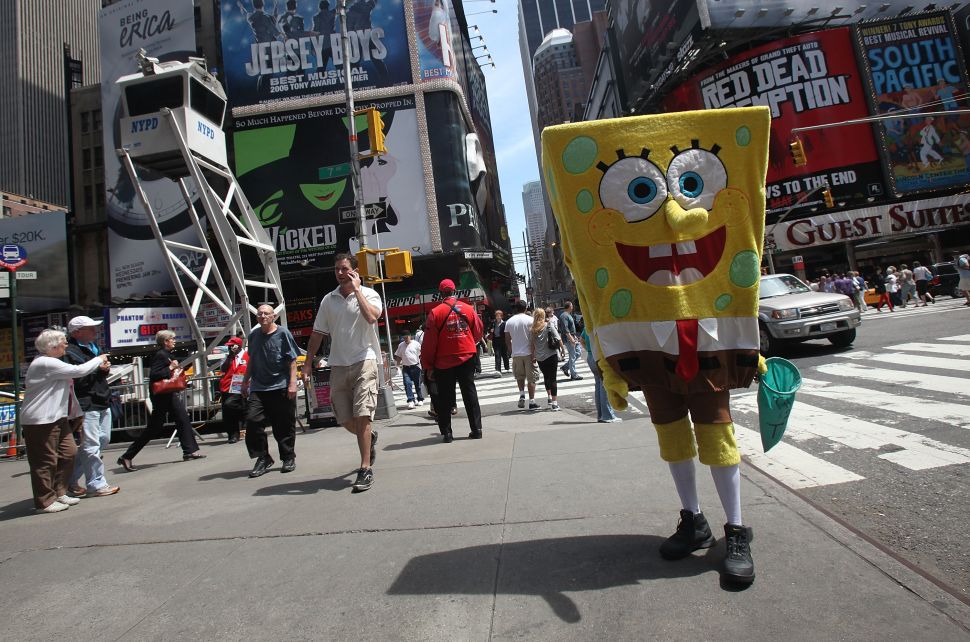