With a “heavy heart,” Mayor Bill de Blasio vowed a thorough investigation into the death of Eric Garner, a Staten Island man who died after police wrestled him to the ground for allegedly selling loose cigarettes.

Video posted by the New York Daily News shows Mr. Garner arguing with police that he had done nothing wrong — until a police officer wraps his arm around Mr. Garner’s neck from behind him, taking him to the ground and then holding Mr. Garner’s head against the sidewalk. Several other NYPD personnel gather around to restrain and cuff Mr. Garner as he shouts, “I can’t breathe! I can’t breathe!”

Mr. Garner, 43, a father and grandfather who had asthma and weighed up to 400 pounds according to several reports, died of cardiac arrest on the way to a hospital, Police Commissioner Bill Bratton said Friday.

“Like so many New Yorkers, I was very troubled by the video I reviewed earlier today,” Mr. de Blasio said. “I have instructed Commissioner Bratton to ensure that there will be a full and thorough investigation of this incident.”

That investigation will be led by Staten Island District Attorney Daniel Donovan, with assistance from NYPD’s Internal Affairs Bureau.

While Mr. de Blasio repeatedly expressed sadness and sympathy for Mr. Garner — and concern about the actions of the NYPD personnel involved, including a 4-year and 8-year veteran who have been placed on desk duty — he said he couldn’t jump to conclusions about the incident based on the video.

“I watched it the same way a family member would watch it, and I was very sad to watch it,” Mr. de Blasio said. “But that being said, we can’t pass ultimate judgement based on one video.”

Chokeholds are prohibited by the NYPD’s policies — because they can lead to death, Mr Bratton said.

“As defined in the department’s patrol guide, this would appear to have been a chokehold,” Mr. Bratton said, based on the video he’d seen. “The investigation held by the district attorney’s office as well as our internal affairs will seek to make that final determination.”

The arrest has sparked outrage from community leaders — Rev. Al Sharpton is set to hold two separate rallies Saturday — and elected officials who have decried that Mr. Garner was killed over the nonviolent crime of selling untaxed single cigarettes, known as “loosies.”

But Mr. Bratton told the Observer that while it may seem like a “small, maybe innocuous matter” to some, it’s not to local businesses and residents — and said it’s one of the many quality of life issues “the New York City Police Department is asked to address every single day.”

Many of those appalled by the death Friday had looked to Mr. de Blasio — who vowed to reform policies like stop and frisk — to change the NYPD. The mayor said he and Mr. Bratton were “moving very consistently and energetically to create a series of reforms.”

“This incident was tragedy. There will be a very thorough investigation,” he told the Observer. “But if you look at what’s happening all over the city, I think you can safely say that real progress is being made.”

Pressed again by another reporter on whether such a response from the police was appropriate given the nonviolent crime, Mr. de Blasio said police officers are expected to respond to community complaints and enforce the law.

“The question of how you respond is a different matter, and I have real confidence that there’s going to be again a very full and thorough investigation,” Mr. de Blasio said, noting if officers have to be retrained, they will.

Witnesses told the News and the Staten Island Advance that Mr. Garner hadn’t been selling cigarettes at all — though he’d reportedly been arrested for that before — but had just broken up a fight when officers approached him. In the video, Mr. Garner says he’s done nothing wrong, asks the arresting officers not to touch him, and tries to move away.

“The video made quite apparent that the officers made it known to the deceased that they were intending to arrest him,” Mr. Bratton said. “He made it quite known to them that he was not going to allow that arrest to occur. I do not expect my officers to walk away from that type of situation.”

Mr. de Blasio held the press conference just hours before he is slated to board a flight to Italy for a 10-day vacation. 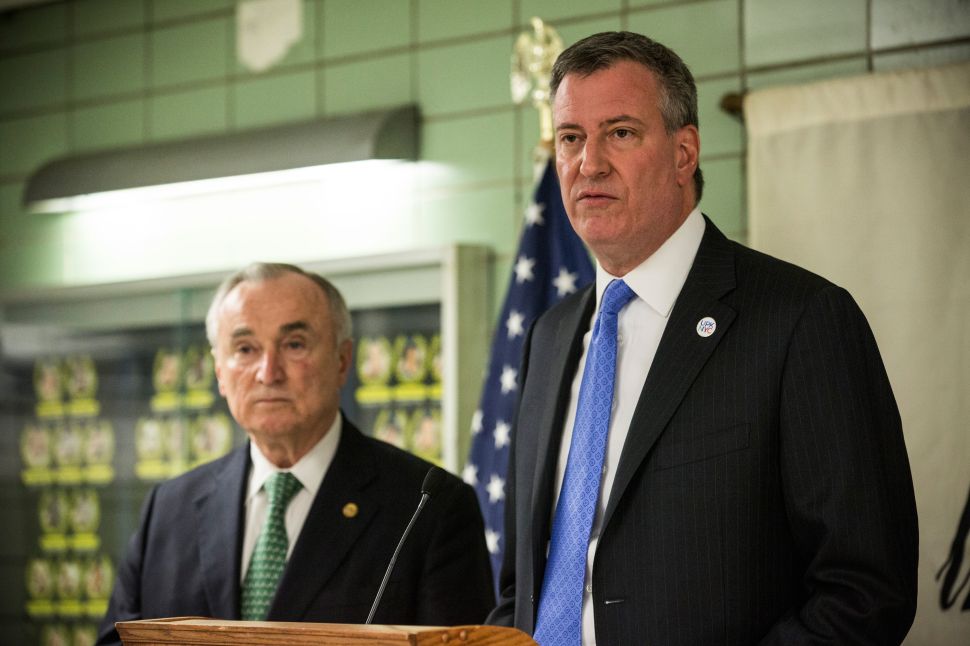