On Saturday July 12th, mini festivals hosted by MassBliss, a company dedicated to helping others achieve what they call “present moment awareness,” will pop up in NYC parks, dnainfo.com reported.

“Mindfulness or present moment awareness is the ability of connecting authentically to the ‘here and now.’  Many of us identify with our thoughts and overanalyze the past and future.  So, mindfulness is a tool for making choices and actions that are informed in reality,” Mr. Belcher explained serenely to the Observer.

The booths, or ten-by-ten foot tents, are intended to allow park-goers to trade the daily unpleasantness of New York in the summer for a number of free programs in line with the MassBliss mantra: “Breathe. Connect. Create.”  There will be workshops and performances in yoga, music, dance and art. You might watch Capoeira, an improvisational combo of dance and martial arts, or say Namaste in a peaceful moment of meditation.

These park pop-ups will serve to preview a larger festival currently being planned to take place in New England at the earliest date of fall 2015.  MassBliss will be hosting theater and performance companies that will inspire a theme for an individual village, with participants choosing which village they will camp out in for the duration of the four days.

So far, Mr. Belcher and Mr. Puckett’s plans have drawn comparisons to Burning Man festival.  However, Burning Man, a weeklong camp-out for the wealthy and the hip to let loose in Nevada’s Black Rock Desert, is certainly a little more hardcore than this artsy yoga retreat.

Belcher elaborated on MassBliss, stating, “Our company is based on the larger idea: one truth, many paths.  We curate events, like the Breathing Booths, to provide people with infinite paths for accessing the present moment through four main tracks: move, connect, create and resonate.  One person may find [mindfulness] by drawing a picture and another by doing yoga – we don’t want to impose one way.”

Regarding the festival in the works, Belcher said, “It’s hard to explain this thing that doesn’t exist yet. We are inspired by the organic creative community of a Burning Man festival, but with live performances and interactive music workshops, the program will also draw some elements from a festival like South by Southwest.” 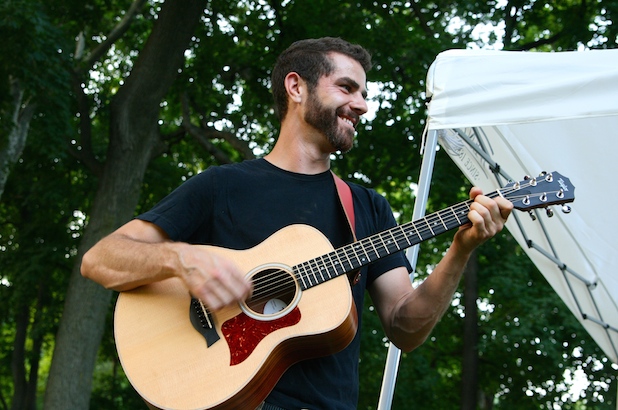