What’s worse than feeling anxious on your overseas flight? Cuddling up to a blanket that visually displays your nerves to everyone else.

The so-called “happiness blankets” are outfitted with LED lights that turn red (stressed and anxious) or blue (calm and relaxed) according to readings by neuro-sensing headbands.

A video released by the airline depicts scenes revealing passengers’ various moods throughout a flight. Initially, the colors of most blankets fluctuate as passengers settle in. The video shows many passengers’ blankets turn blue or purple as they eat, drink or watch a comedy. Another’s turns bright red as the passenger watches a boxing match.

Sadly for anyone who was dying to test out the mood-reading blankets for themselves, they won’t be coming to a flight near you. British Airways was only using the blankets as a promotional tool to show off how happy their customers are.

For the record, we refuse to believe passengers could be anything but distressed while eating airplane food 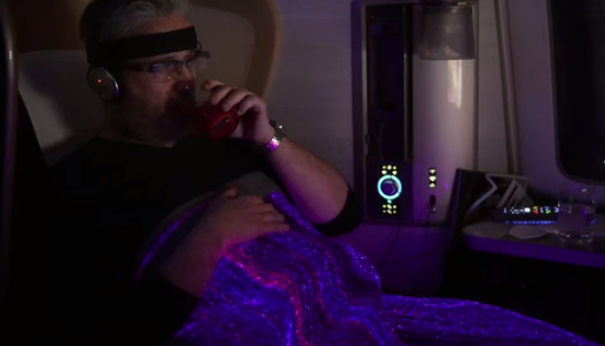