The mood was festive because for the first time in decades, decisions were made to allocate resources instead of cutting them, they claimed. Three members of the Bronx delegation, Council members Jimmy Vacca, Carmen Arroyo and Ritchie Torres, were not at the event.

“The Bronx had a great victory. I’ve been in the city council for the last ten years and in the last ten years the way we negotiated the budget was by starting to cut funding from groups,” said Ms. Palma, who serves as the chair of the Bronx Delegation.

“This year we had the unique opportunity, after ten years, instead of looking at the budget and deciding where we were going to cut to be able to balance this budget, we engaged in conversations through the leadership of speaker Melissa Mark-Viverito and the budget negotiating team of the City Council, with the Mayor and decided to do things differently,” she added.

Ms. Palma also spoke about how the new Bronx delegation secured funding for six initiatives and guaranteed more than $69 million in capital funding and over 7.5 million dollars in expense funding for the Bronx.

Among the priorities that were addressed in the budget were street pickup, job creation, legal services for low and moderate income families, safety and anti-violence campaigns, and millions in funding to support Bronx institutions like Bronx Community College, Mind-Builders Creative Arts Center and Wave Hill, among others. In the past, the City Council would battle with the mayor over cuts to various programs they considered a priority.

“This is the first time in an incredibly long time that we as a Bronx delegation have come together to talk about something positive in the Bronx,” Ms. Gibson said. “I am so honored to be here to stand with all of my colleagues and community groups in really this momentous occasion. The Bronx is on the rise,” she added.

Mr. Cabrera emphasized the importance of the rules reform that more equalized the amount of discretionary dollars council members received.

The story has been updated to reflect that Councilman Andrew Cohen did briefly attend today’s event and that Councilwoman Carmen Arroyo and Councilman Jimmy Vacca did not attend. 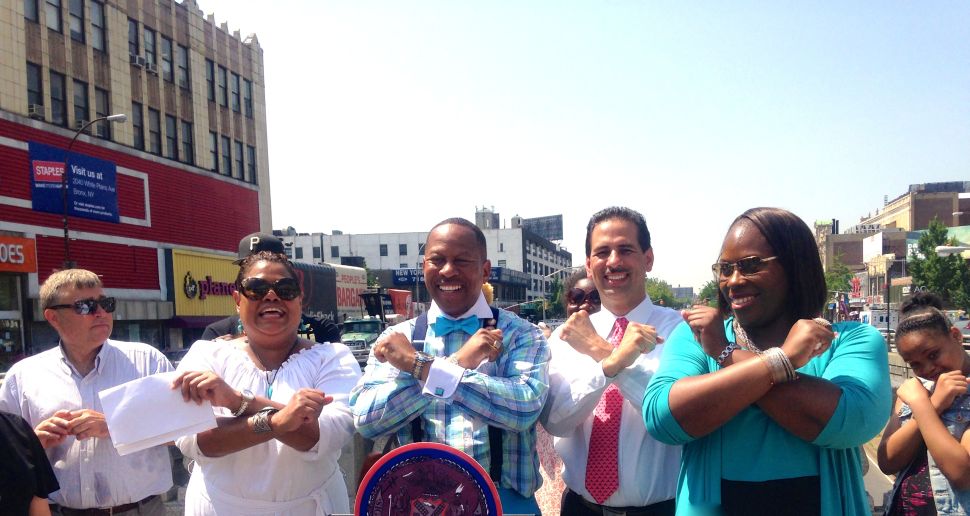