RIDGEWOOD – The American Federation of Teachers New Jersey (AFTNJ) has announced its endorsement of Roy Cho for Congress in the Fifth Congressional District, citing his commitment to strengthening public education and pulling the nation out of its higher education affordability crisis.

“We appreciate Roy’s commitment to education and support for teachers,” said AFTNJ President Donna M. Chiera. “His mentorship of students from low-income backgrounds who are the first in their family to attend college is admirable as is his speaking out about the crushing debt these students face. We are proud to endorse his candidacy.”

Cho serves on the board of directors of the nonprofit organization New Jersey Needs You, which focuses on mentoring college students from low-income backgrounds who are the first in their family to attend a four-year college, helping them to graduate and secure internships and jobs.

“I am honored to have the support of our education professionals and pledge to work with them on long-term solutions for our broken student loan system,” said Cho, a Democrat seeking to unseat six-term incumbent U.S. Rep. Scott Garrett (R-5). “Unlike [Garrett], I won’t vote against cutting student loan interest rates, or gutting the grant programs our students rely on to afford the education they need to build successful careers. Our students and families deserve better.”

Cho cited rising student debt levels for impeding economic growth in a campaign press release. Graduates, many saddled with debt, are forced to postpone big-ticket purchases such as cars and homes and make career choices based on their ability to pay back their loans. According to research reported in the Wall Street Journal, 70 percent of this year’s college graduates have student loans, and carry an average of roughly $33,000 in debt. The Federal Reserve Bank of New York reports that 11 percent of the national $1.11 trillion in student loans is currently either 90-days delinquent or in default. In 2013, student loan debt even outpaced the nation’s total credit card debt. 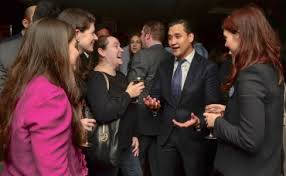