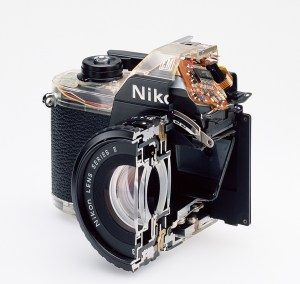 The first time I saw a Christopher Williams photograph, what struck me was how much it showed—it managed to be at once a photograph and to pull back and show a number of usually invisible things about a photograph being made. Call it a super wide-lens effect. Take, for example, one of his pictures of a camera lens bisected, like Cutaway Model Zeiss Distagon T* 2.8/15 ZM, 2013. The title, which has been shortened here, goes on to describe the specs of the lens—its focal range, and its weight and serial number. The c-print is rich with the detail of the mechanics of a camera: concatenate ground-glass chambers pinned in place with precision steel and copper. The image speaks not just to the object on display but to the origins of photography—the portable camera obscura, the camera lucida and those earliest cameras by Louis Daguerre.

Mr. Williams makes pictures about how people took pictures at the end of the 20th century. Studio tools appear prominently: a light-meter here, a color card there. One image shows a beautiful young woman wrapped in a yellow towel, barefaced as if fresh from the shower, yet with rosy cheeks and with taupe eye makeup on (Meiko Smiling, 2005). Another is of an underwear model, her garments visibly pinned from the side to fit (Untitled, 2008). They are stories about advertising: the fingernails of a hand adjusting the shutter speed of a Leica in one picture are perfectly manicured. Seven perfect red apples are impossibly dewy and magazine-ready.

Mr. Williams’ best subject is analog studio photography. These range from still lifes composed of the plastic architecture of darkroom developing—developing trays, funnels for chemicals, timers, chemical fixative, red lights—to the brand names of the medium—Braun, Makita, Nikon, Kodak—to the way objects are staged at a photo shoot. No picture rests in itself. Each one strains for the pull-back, feels on the verge of being cropped, placed under text and put in an ad: a naked woman, palm trees, a car tire, a Japanese woman’s haircut, a haystack rolled. A sign for clothing from a German department store ties the project to Nadar, who used the camera to capture product display and advertising.

Mr. Williams illuminates the political and social context of an image from a studio setting. I found myself thinking about Sigmar Polke and his use of photographs—often from the commercial world—as the basis for paintings. What does it mean to refocus on the photograph? Mr. Williams’ work obviously reflects on the constructed nature of the world around us. But does it have the potential or desire to change that world—and does it matter if it doesn’t?

The exhibition makes elaborate use of artistic curatorial interventions. There is no wall text. There are a large number of floating walls, some of which are reconstituted from other exhibitions (including a white cinderblock wall from Whitechapel Gallery, London, where this show will travel next). There are no labels, and the photos are hung ostentatiously low. The prints themselves are not unduly large. This retrospective, following 35 years of works, is a good edit of the sprawling show that appeared at the Art Institute of Chicago this winter, which took up three galleries. MoMA’s show is relatively compact, all on a half-floor, but it loses nothing from this condensation—if anything, the work appears more intelligent and unified than it did in Chicago. Its placement in the main galleries at MoMA (rather than the photo galleries) shows ambition, on the part of the artist and the curators, to link this work with the conceptual artists with which Mr. Williams studied—notably Michael Asher of Cal Arts. A superstructure of wall graphics inserts the names of curatorial shibboleths John Kelsey, Bernadette Corporation and Michael Krebber. One of the strongest photos is a green-striped panel taken from a Daniel Buren piece. The whole setup takes its social cues from the Kunstakademie Düsseldorf, where Mr. Williams teaches. Yet the show lives and dies with its images—all the curatorial signposting only signals what the photographs reveal. With most of the best work in the retrospective made in the past 15 years, Mr. Williams is just hitting his stride.

Filed Under: Arts, Museum of Modern Art, the production line of happiness