The New York League of Conservation Voters gave Mayor Bill de Blasio decidedly mixed marks on his environmental efforts for his first six months in office – knocking the mayor for a lack of details on making the city more resilient to climate change.

“This issue hasn’t risen to the same prominence that universal pre-k or Vision Zero does, in terms of signature issues,” Dan Hendrick, a spokesman for the league, said.

The report, dubbed “Taking Stock,” gave the mayor credit for incorporating energy-efficiency, sustainability and public transit into his housing plan, and for making overhauls on Hurricane Sandy recovery and creating an office focused on resiliency. But the group pointed out that he’s yet to expand on former Mayor Michael Bloomberg’s vision for preparing the city for big storms and rising sea levels.

“We applaud Mayor de Blasio for taking a number of critical measures to help New York City recover from Superstorm Sandy, adapt to the climate crisis and advance the city’s sustainability goals,” the group’s president, Marcia Bystryn, said in a statement. “But six months into his first term, the mayor has yet to give a major policy address on his environmental vision. Climate change and sustainability are the defining challenges of our time, and we look forward to working with the administration to elevate them to the level of his other signature issues in the coming months.”

“From the first days of this administration, Mayor de Blasio has made a clear commitment to resiliency and sustainability,” spokeswoman Amy Spitalnick said. “The city’s first-ever mayoral office focused on resiliency has already established New York City as a leader in combating climate change, secured funding for key projects, and made significant progress to ensure a greener and more resilient city. It’s been a very productive six months and this is just the beginning.”

Mr. de Blasio created a new Office of Recovery and Resiliency, headed up by Daniel Zarrilli, originally appointed to a similar role by Bloomberg.

While Mr. Hendrick notes the mayor has done a “great job” on the recovery side of Hurricane Sandy, “there are a lot of questions around the long-term resiliency effort.” The sweeping, $20 billion plan was first outlined by Mayor Michael Bloomberg in a report last April, and Mr. de Blasio has embraced it, saying it’s one area where he and his predecessor agree.

But Mr. de Blasio “has yet to articulate his vision for how exactly he will expand and build upon the plan created by the Bloomberg administration.” He hasn’t addressed, for example, a $4.5 billion funding gap in the plan that could put many projects on hold, the group notes.

The issue is one the New York League of Conservation Voters wants to keep on the front burner, Mr. Hendrick said.

“If it doesn’t receive the full-on attention that it deserves, because the issues are so complex in some ways, it’s easy to sort of get lost in the bureaucracy of it,” he said.

The League of Conservation Voters report also points to an office that remains without a leader — the Office of Long-Term Planning and Sustainability, which must update every four years the PlaNYC report on the city’s efforts to become more sustainable by 2030.

The league noted that the ongoing lack of a director “raises questions about the administration’s focus on this unit’s important work.”

The next PlaNYC report is due to be delivered in April 2015.

“This would be a good time to have somebody in that office giving it good direction,” Mr. Hendrick said.

For the first time this year, a PlaNYC progress report included details on the 257 resiliency efforts underway — 29 complete and 202 in process, something for which the report praised the mayor. The report also highlighted the city’s work informing people about their evacuation zones and for pumping money into capital improvements, though it noted much more was requested than granted for parks funding. 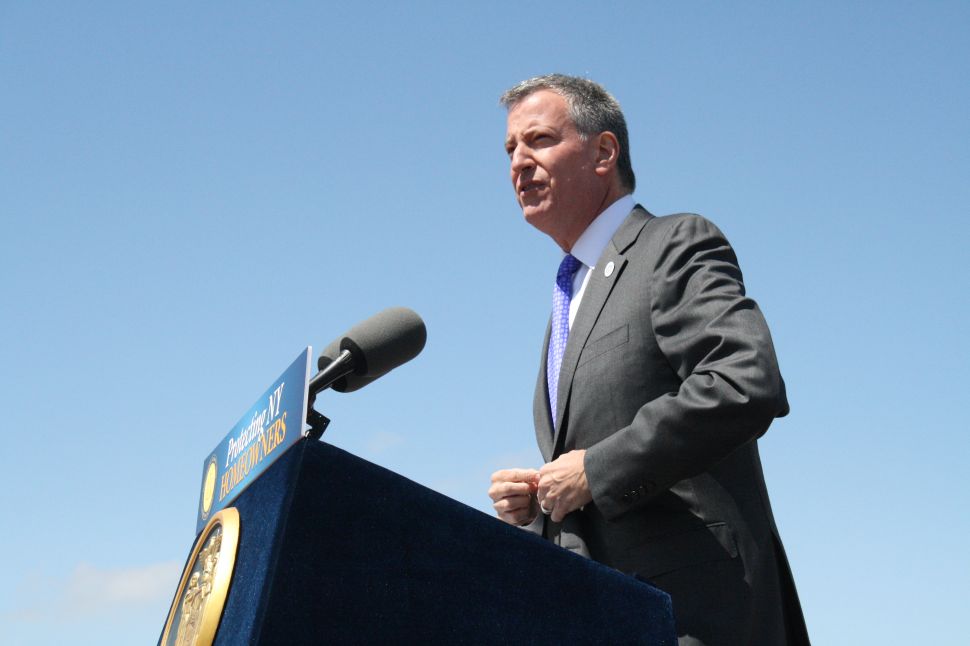