GREENWICH, CT – He came to stump for Republican gubernatorial hopeful Tom Foley — and to grab a bite to eat, maybe? — but Gov. Chris Christie soon found himself doing little of either, cornered by a near-crazed pack of reporters and cameramen asking questions on all manner of issues here at a diner this evening.

Asked about the ongoing crisis in Israel, Christie said the country has “an absolute right to do what it’s doing” — which includes a ground invasion of the Gaza Strip — and chastised the Obama Administration for its lack of response in the region.

Criticized earlier this month for vetoing proposed gun control legislation in New Jersey and passing up a meeting with families of the victims of Newton’s school shooting, Christie fired back, noting that he met with some of those families last month.

“I have nothing but sympathy for those folks that went through what they went through in Sandy Hook, but I don’t believe [gun control by limiting the number of rounds] is an effective way to do it, and that’s a difference of opinion,” he said. (At a second stop on his swing through here this evening at Belle Haven, 150 people opposed to Christie’s gun control stance gathered in protest of the governor).

“Listen, I know [Malloy] is thrilled that I’m here today,” Christie said at one point. “And I know he’ll be thrilled when I come here again, and again, and again, to do the best I can to make sure Connecticut has a governor that will bring growth to the state and jobs in its economy. Dan Malloy has had four years to do that and he hasn’t done it. So he can say whatever he wants about me. I happen to like Dan personally.

“But he tends to say a lot of inflammatory things about me, and I’m just not going to return fire,” he added.

Despite the proximity of reporters, who swarmed him as he slowly made his way around the place, Christie seemed relaxed. At one point, he even stopped to smooch an excited fan.

It must have been the setting. Where better for a New Jersey governor to throw his support behind a fellow gubernatorial candidate than at a place called “Glory Days Diner,” ostensibly a tribute to both the Garden State’s favorite musician and style of eating establishment?

“I’m feeling very good about this race on Nov. 4th,” Christie said of the upcoming election between Malloy and Foley. “Remember something, we lost by a very small amount four years ago and since then the people of this state have gotten to see Governor Malloy’s policy up close now for four years. It was only a theory four years ago. Now they have the highest tax rate in Connecticut’s history, and just the way the jobs have been driven out of the state. So we need someone with Tom’s background with jobs, and that’s why I’m here now.”

As head of the Republican Governor’s Association, Christie said the decision to come up and campaign for Foley was tough, but ultimately worthwhile.

He said it might become one of several trips he makes to stump for fellow Republican gubernatorial candidates throughout the coming election season. He’ll be in Denver on Wednesday, he said, to campaign for Bob Beauprez, a congressman and Republican hopeful there.

“If the New York race becomes competitive, I’ll consider campaigning in the New York race,” Christie said. “I’ll go anywhere where it looks like we have a chance to win. We don’t pay for landslides and we don’t invest in lost causes.”

Christie’s visit today — which includes the fundraiser at nearby Belle Haven, hosted by Viking Global Investors hedge fund co-founder Brian Olson — adds fuel to growing chatter that the Republican may be laying the groundwork for 2016 presidential run. He recently returned from trips to primary battleground states like Iowa, New Hampshire, and Tennessee.

But he wasn’t able to get through the presser without being asked about his prospects as a presidential contender, and specifically whether his stance on gun control has affected his viability as a primary candidate.

For his part, Foley, who made an unsuccessful bid for the governor’s seat four years ago, thanked Christie for his support, but refused to comment when asked whether he agreed with the governor’s gun control veto.

“Listen, Governor Christie is a governor of a different state, represents different people. So I don’t want to comment on the decision he has to face in New Jersey, but here in Connecticut we have serious economic problems … so those are the things most on my mind,” he said.

Christie’s schedule also listed two closed-door fundraisers with Foley, at 6:15 p.m. for the Republican Governors Association and 7 p.m. for the Connecticut Republican Party. 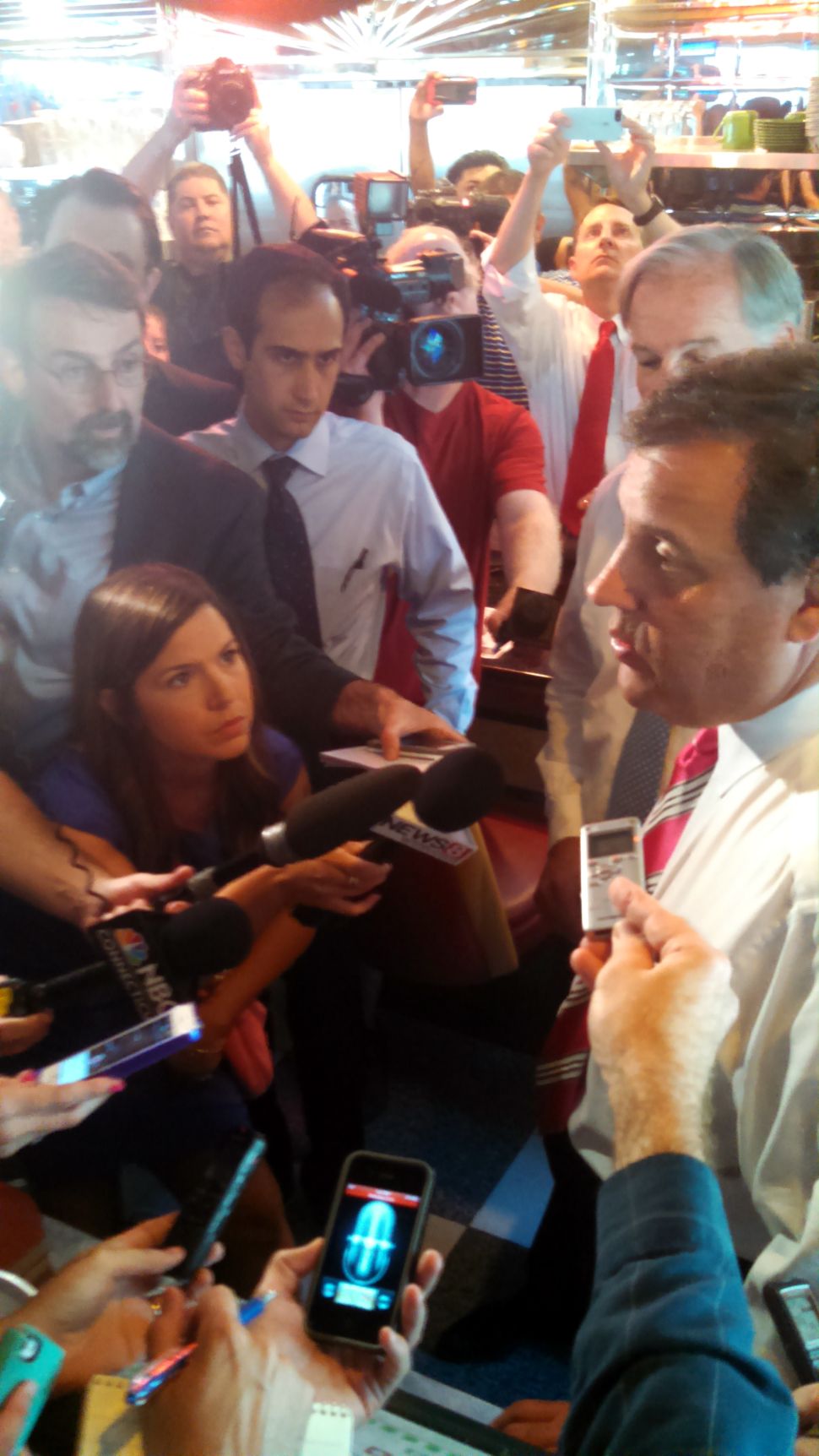