The City Council is set to drone on about some drones.

“The first thing is to give the police department and fire department the ability to make a decision about drones without restriction. They should be allowed to take whatever measure necessary to regulate them,” Mr. Vallone told The Observer.

The goal of the legislation would be to empower authorities to better enforce Federal Aviation Authority Law regarding drones. The FAA bans drones for commercial use, though hobbyists are allowed to fly them in parks no higher than 400 feet. Mr. Vallone said city authorities currently have little guidance about enforcing these regulations.

Mr. Vallone also wants to introduce more local regulations to mirror federal law that would ensure the city is protected from any potential terrorist threats. The United States and other countries now use drones to carry out attacks on enemies.

“It’s the City of New York. There’s a bullseye on our backs,” he said.

Mr. Vallone said the primary inspiration for the bill, however, was an incident this week where a toy drone flew very close to an NYPD helicopter over the George Washington Bridge.

Mr. Vallone said he will meet with Council Speaker Melissa Mark-Viverito to discuss the legislation today. His goal is to have a hearing next month to move the legislation as quickly as possible.

A spokesman for Ms. Mark-Viverito said she would review the legislation. 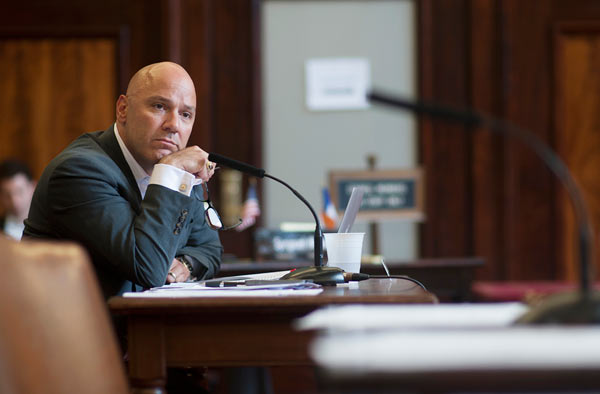