It was a little over one year ago when Rhode Island native and Brooklyn resident Cameron Crockford first brought Del’s Frozen Lemonade to New York. Taking to the streets in his vintage 1949 Chevy Step van, Mr. Crockford hoped to bring a taste of the sweet and laid-back Rhode Island summer to the harsh, jaded city.

And it worked. Just like when Harry met Sally, the Big Apple met Little Rhody, compelling New Yorkers to relinquish their uptight attitudes and simply “have what she’s having.”

With his casual uniform of jeans, sunglasses and a t-shirt, the 26-year-old’s bright smile is as refreshing as the frozen treat he serves up, and it was with the most earnest modesty that recalled his success.

“It’s really flowing,” Mr. Crockford said of his business, after apologizing for smelling of gasoline—he had just come from working on the truck before sending it out for the day.

This season, a second truck hit the city streets—they are usually stationed downtown and announce their location via Twitter. The fleet is also regularly asked to cater events for clients ranging from high-end fashion brands to marketing agencies.

Those who have spent any time in the Ocean State are probably familiar with the lack of pretense found in Del’s signature tart slushee. The frozen delight, which doesn’t bother with fancy flavors or fussy toppings, is slightly fluffier and fresher than a typical Italian ice, with bits of zest running throughout and no sugary aftertaste.

The summer staple is hard to hate and easy to love, which is why Mr. Crockford thought it would be the great escape, a slice of carefree nostalgia, in the bustling city.

“We’re bringing it back to your bread and butter: , sugar, lemon,” Mr. Crockford said. “People walk up to this truck, they don’t feel overwhelmed—they can relax in the classic-ness of a Del’s lemonade.”

It was initially “a grind” for the one-man operation: Mr. Crockford worked brutally long days and the first customers tended to just be New England transplants or Rhode Island natives who missed their summertime favorite and recognized the truck’s bright logo. But soon enough, the icy eat gained a New York following.

“The thing is getting people to try it. People taste it and try it, they buy it,” Mr. Crockford said confidently.

If there is anyone to sell the notion of a laid-back summertime experience, it is Mr. Crockford. With long, shaggy blond hair, luminous blue eyes and a complexion that makes him look like he’s spent a few too many days in the sun, Mr. Crockford could have walked right off the beach he grew up on, despite sitting in a hip coffee shop in Dumbo. In fact, judging by his beachy appearance, you’d wonder why he ever left Rhode Island in the first place.

Mr. Crockford first came to the city in 2010 after graduating from Skidmore College, where he majored in art and minored in business. But after a series of internships in the branding, marketing and advertising worlds, he realized the suit and tie lifestyle wasn’t for him.

“I gave the corporate world a shot, and nothing was really going my way or working out. I didn’t really see myself in that atmosphere…So I bailed on that,” he said.

Mr. Crockford decided instead to pursue art and fabrication, his original passion, working with installation artist Tom Fruin on projects such as the iconic metal signage for the Wythe Hotel and a series of stained glass towers that dot the Brooklyn skyline.

But Rhode Island was still in his heart and during summers spent visiting his home state,”wheels starting turning.” He spent his spare time ruminating, researching and obtaining permits, bent on bringing his favorite hometown treat to his new city.

“Maybe I’ll give this a shot; this will work. The city gets so hot, there are a lot of New England ex-pats. I think it will have a good following,” he said, remembering his thought process.

Despite ditching the corporate world, Mr. Crockford’s branding experience shines through. He carefully makes sure every aspect of his business promises a “classic, vintage, home-grown” experience, rather than “a new, shiny, gourmet” one.

The simple treat is just as unaffected as the refurbished truck that sells it, a welcome juxtaposition to the fast-paced, gourmet and hi-tech food trucks roaming New York streets. “It’s weathered, sun-kissed,” Mr. Crockford said.

“I was underneath that thing for 60 days,” said Mr. Crockford, who overhauled the truck himself. He has since continued to build and craft, now running a furniture design business, but the trucks he owns and manages aren’t going anywhere.

“Del’s is my first venture. I’ll always have that attachment,” said Mr. Crockford like a proud father. “I will always keep the Del’s going in New York.”

And that’s a good thing. For as much as I love New York and its sophisticated food trends and inventive flavors, sometimes it’s best to forgo exotic gelato or fanciful cones and instead surrender to a humble summer classic that will never go out of style. If you need me, I’ll be chasing down that ’49 Chevy and slurping away. 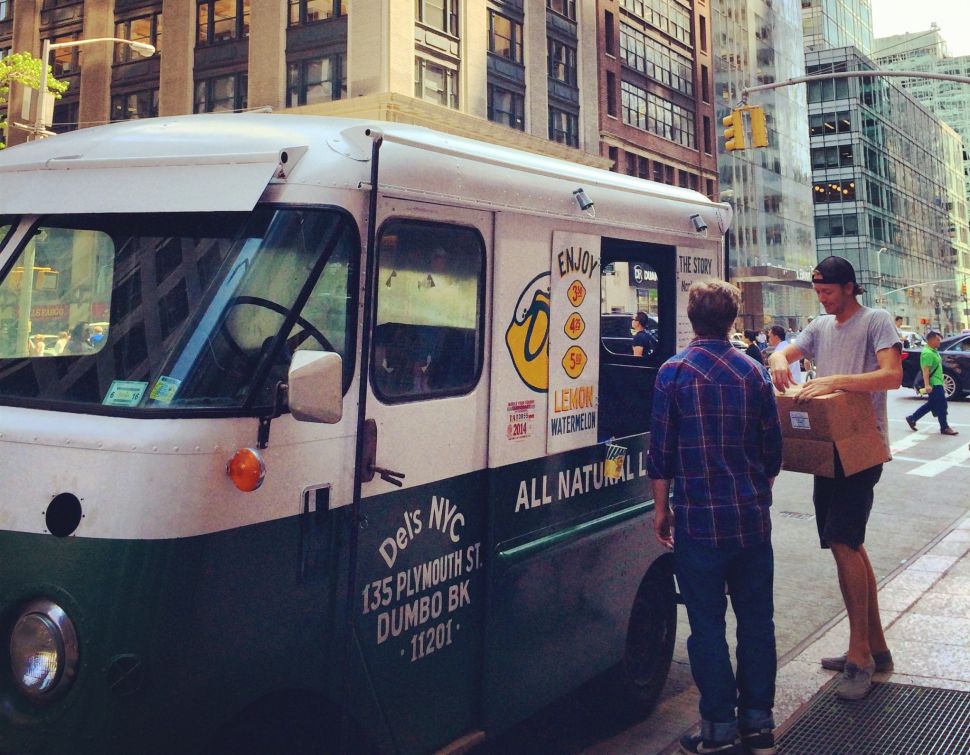