(Photos by Jen Snow and Kelli Anderson/Courtesy of Russ & Daughters)

Last week I gave the new Russ & Daughters Cafe five out of five stars. I was bowled over by it. I’ve given places five stars before, starting with ABC Cocina and including Luksus and Bustan. In hindsight, as the bloom wears off, I’ve sometimes wondered if I was too generous or starry-eyed. Such is the life of a critic, or at least this critic, who tends to find himself more passionate than dispassionate.

Often, and as I’m up-front about, my rating is determined not only by experiential factors like deliciousness and decor, execution and vision, but by deeper, less apparent aspects. How does a restaurant fit the fabric of the city? In a broadly ethical context, is it good or bad? With Russ & Daughters, what made the place wasn’t just the silky lox or boob-like knishes, but how the owners, Josh Russ Tupper and Niki Russ Federman, have come to terms with their family’s past and the mantle Russ & Daughters has worn over four generations.

As a casual diner, or an Observer reader, I’m not sure any of that matters. Take the history, leave the matzo brie: The food alone merits the high rating, maybe not five stars, but again, I don’t claim to be a flavor-evaluating automaton. Nevertheless, I’ve been curious why I had such visceral enthusiasm for Russ & Daughters. One answer came in therapy, unsurprisingly. I used to go to a cognitive behavioral therapist named Sharon, who was full of ideas and advice. Now I go to a Buddhist psychodynamic therapist named Natalie, who is full of silence. At a recent session things got real: She asked me, in the course of discussing why I flipped out when my wife asked me if I really was going to check on this nice Polish couple we hired to clean our house (Wizards of the Home, btw, highly recommended), right after I said I was going to do exactly that. What made me so insecure, Natalie wondered. “The Holocaust?” I said, jokingly. what makes me so insecure. “The Holocaust,” I said.

Natalie didn’t get the joke, so we got into it—the Holocaust, that is. She brought up the old Lenny Bruce line, “In New York, even if you’re not Jewish, you’re Jewish. Outside of New York, even if you’re Jewish, you’re not Jewish,” which, given that I am a New Yorker and Jewish, I guess makes me an uber Jew. But other than knowing who Lenny Bruce was, I didn’t feel confident Natalie would understand the low-lying anxiety of persecution that is our racial inheritance. With perverse pride, we Jews carry the fear, even after all these years, that whatever you have can be snatched. It’s so silly I was uncertain whether Natalie, a goy from leafy Connecticut, would get it.

Yet this anxiety pervades every interaction I have with the world, so much that I have a hard time and feel foolish putting it into words. Russ & Daughters gets it. The store was founded before World War II by a Lithuanian Jew. The Russ family was a product of the famous Lower East Side shtetl ferment Henry Roth so movingly captured in Call It Sleep, which also pre-dates the war. My own family’s immigration, from a town in Galicia not far from Joel Russ’s, occurred in the late 19th century. We were safe from the Nazis, though maybe not the Nazis of Newark.

For all that, there’s no separating my delight in this restaurant, which opened in 2014 on the Lower East Side, with what happened in the 1930s and 40s across Europe. It’s not that a bagel and lox is served or a latke offered. It’s not how satisfying the babka french toast is or how crisp the pickles are. It has something to do with flourishing in the very long shadow of racial decimation, and in the construction of something vibrant and valuable, when each Jew knows, tucked somewhere in a cocoon of neurosis and logorrhea, that his property can be stripped at any moment and he run out of town like a rodent.

The resonance of Russ & Daughters’ beauty is self-evident to anyone who has had anything taken from them, but also because this shadow nervous system of fear grafted onto the Jew’s skeleton is so often the root cause of injustice. One need only read the New York Times headlines to see how easily fear and defensiveness cross over to offensive action and then into excess. And though the cause is understandable, for me at least, the consequences are unjust. Rarely does great beauty and growth come from a defensive crouch, but at Russ & Daughters Cafe something soft and growing, something made of love, reaches through the carapace of fear to grow unfettered.

So did I give Russ & Daughters Cafe a five out of five because of the Holocaust? Yeah, I guess I did. The Holocaust, that is, and the bialys. 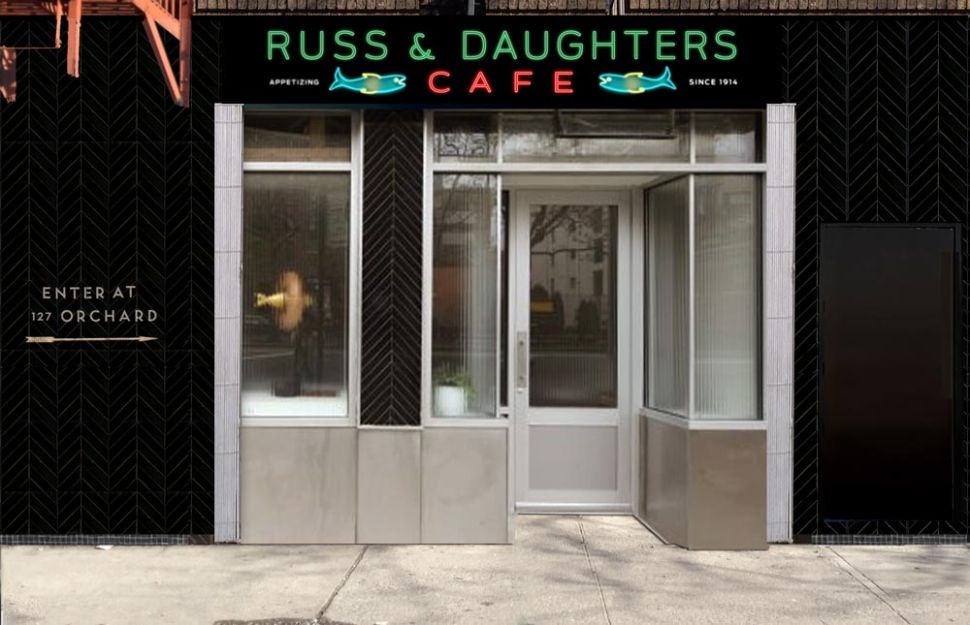