“Displayed” has my vote for the most seductive group show of the season—an easy choice, given its treasures and the fact that, in a sense, it takes seduction itself as its subject, with work that examines and exploits the “possibilities inherent to the processes of selection, arrangement and presentation,” as its organizer, White Columns director Matthew Higgs, writes in a statement. (He proposes the term “displayism.”) These are works that are at least partially aware of themselves in the world, as objects of delectation, as things to be viewed, debated, traded and savored. They’re putting their best foot forward, knowingly, playfully objectifying themselves.

It opens with a stunner: a 10-foot-tall standing wall and sculptural piece richly patterned with Deco-like geometry by Chicago veteran Diane Simpson, an haute fashion store window ingeniously abstracted. Nearby, Josh Smith contributes one of his “Stage Paintings,” a wooden platform with lights trained on a hanging canvas bearing his name. Mediums are stepping outside of themselves, and giving themselves a once over. Two rugged, chunky Chris Martin paintings—green, yellow and red blobs on black—do double duty as promotional signs, hanging on the gallery’s façade, beckoning viewers from down the block.

Luscious still life pictures channel the tasty sheen of high-end photography even as their subjects or execution short-circuit those conventions from within: Roe Ethridge has mackerels modeling Chanel bracelets, and Marina Pinsky snaps lustrous, luxurious displays of paint cans and cleaning-liquid bottles that seem to be spraying the very surface of their photos, lending a faux-digital blur. Rachel Harrison and B. Wurtz, meanwhile, offer sturdy, handsome sculptures with the barest of means (a few slices of plywood here, a few daubs of paint there), elegantly eliding pedestal and base and work, the latter artist gingerly floating plastic bags upside-down atop wires in one quiet poem from 1993.

Flower arrangements are also on hand, and all seem to be harboring little secrets beneath their sumptuous surfaces. Carissa Rodriguez has a gingerly balanced, asymmetrical ikebana that is sinisterly titled I Will Cook Myself Tomorrow (2012), Margaret Lee places a lone orchid plant atop a white Shiro Kuramata table and before a white canvas, each adorned with polka dots, a deadpan camouflage, and Marc Camille Chaimowicz’s bouquet is made of paper—flowers that will never die, always ready to please.

Mr. Higgs positions the excellent Nancy Shaver, who remains too rarely seen, as one of the show’s key figures. She’s represented not only by some of her vibrant, winsome assemblages, but also by the various charming and bizarre bric-a-brac (motorcycle helmets, a toy dollhouse) she sells at Henry, her idiosyncratic antique store in Hudson, N.Y., each sporting a little paper price tag—a Duchampian move, mingling the display conventions of art, artifacts and souvenirs.

And one more highlight: Simon Martin’s instant classic, the nine-minute video Carlton (2006), an expert case study in the alchemical magic of display. Dramatic, almost-sensual tracking shots examine the titular, extroverted bookshelf created by the Italian design group Memphis in the 1980s, as a narrator tells the story of the movement and the object, her voice permeating the entire gallery. She wonders if that piece of furniture may yearn to become a sculpture, to transform itself into something else, and as the camera glides along its angles, showing every inch of the remarkable object, you almost think it’s going to come to life. 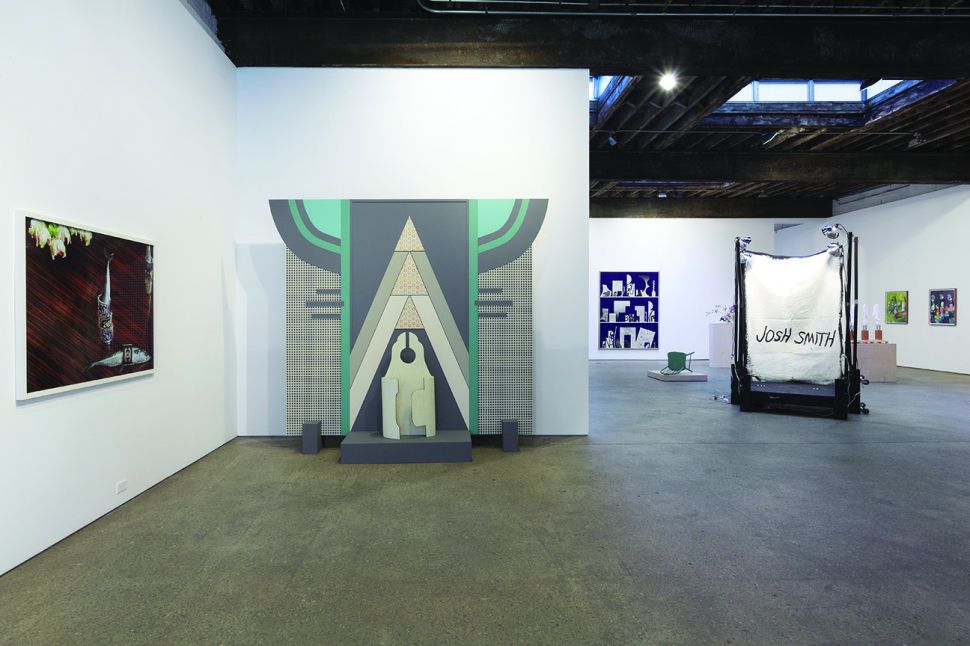