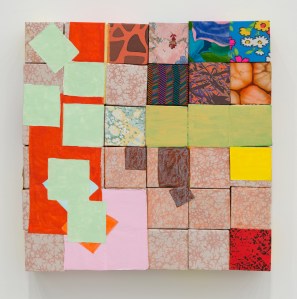 The choice that curators Cynthia Daignault and Mark Loiacono set up in “Eric’s Trip,” a group show named after Reel 9 of Warhol’s 1966 Chelsea Girls, is high contrast but not quite on the level. On one side is a theatrically full-color mimicry of black and white, as in Margaret Lee’s (Brancusi I) + Dot Painting, which throws a few casual black dots against an impossibly milk-white canvas and an MDF doppelganger of a Brancusi notched column; Sheila Hicks’ Tipped, a small, diamond-shaped weaving like an ancient Eskimo account of the Milky Way; and three installations by Kamau Amu Patton.

On the other is an explosively bright palette situated right on the woozy border between fantasy and the ideal. Eight paintings by Nancy Shaver are hung together in a single constellation; each consists of wooden blocks covered in fabric, with restrained additions of paint, thread, or strips of suture-like tape, as necessary. In Judith Linhares’s oil painting Carry On, a tawny-red Adam in a geodesic, Little Prince Eden patiently carries a purple-skinned Eve on his shoulders as she pretends not to be throttling him. Vertical stripes of color as thick as fence posts make a green and yellow sky behind them; one particularly yellow stroke rises up from Adam’s neck to a tuberous cloud as if to a prop halo.

Incarnating the purported chromatic struggle are four unnerving, almost invisible Plexiglas sculptures by David Kennedy Cutler, made with a heat gun and bravado and looking like the discarded carapaces of some 8-foot-tall race of arthropod aliens.

Hanging discreetly off to the side, like an affable adult who’s wandered into the wrong party, are two silver prints by Rory Mulligan. They seem well aware that any apparent dichotomies are only part of the trip.