I think we should all probably pack it up now. Go home. Reality TV is heading to places that I’m not sure it can come back from. Case in point: ABC’s The Quest, which both premieres tonight AND is totally, absolutely the weirdest shit.

Here’s what I can discern from the title sequence up there, but bear with me. The Quest is apparently a mix between scripted fantasy and reality, where 12 contestants called “Paladins” compete in real challenges, which somehow help to save a made-up place called Everealm from evil. An evil that can be easily vanquished by archery competitions and stuff. The trailer says it is produced by “an executive producer of the Lord of the Rings trilogy.” I can’t tell if Mark Odesky didn’t want his actual name attached to the show’s trailer, or the show didn’t want the name of the producer who thought The Texas Chainsaw Massacre: The Beginning was a good followup project to The Lord of the Rings on their trailer.

[youtube https://www.youtube.com/watch?v=QyNKeDasNlQ&w=560&h=315]
The fantasy elements of the quest are going to be played by actors, while the contestants are just every day people trying their best to pretend that they didn’t see that ogre at catering like an hour ago. The “big bad” of this “reality” series is Verlox the Darkness, played by Douglas Tait. The role is in good hands, as Mr. Tait as previously portrayed a Bat Mummy, a Long Face Bar Alien and in his most challenging role to date, a Crocobearimoose.

The 12 paladins have been culled from all over the country, and their bios all read like people who were absolutely born to be on ABC’s The Quest. Personal favorites: Christian from New York (“A skilled and imaginative competitor who has showcased his sword fighting talents in the New York Renaissance fairs”), or maybe Bonnie from Louisiana (“She is primed for an adventure having spent two months traveling with gypsies having to leave her home after Hurricane Katrina”).

Or then there is a professional MMA fighter named Shondo Blades. I demand to see a birth certificate on that one. Let’s let Shondo’s bio speak for itself, shall we?

What is your guilty pleasure when it comes to the fantasy genre?

My guilty pleasure, if you can call it one, is reciting lines in the shower like I’m playing the character of the Black Panther, which is my dream role.

Describe yourself in three words.

At this point, there are really three scenarios where I see this becoming genuinely entertaining. Scenario one: complete, Westworld-style malfunction. I’m talking rogue mechanical trolls. Maybe a dragon. Maybe two dragons. I’d be very invested in seeing how Paladin Adria (“adapts well to new situations and has lived in numerous locations internationally”) adapts to fighting for her life with a prop sword against robots.

Scenario two: One of the contestants gets way too carried away. This show is a hero complex waiting to happen. I just want to see ABC executives’ reactions to Paladin Leticia (“has the brains with a degree in business management information systems, but she also has a green belt in judo”) lops off an extra’s head with a battle axe. 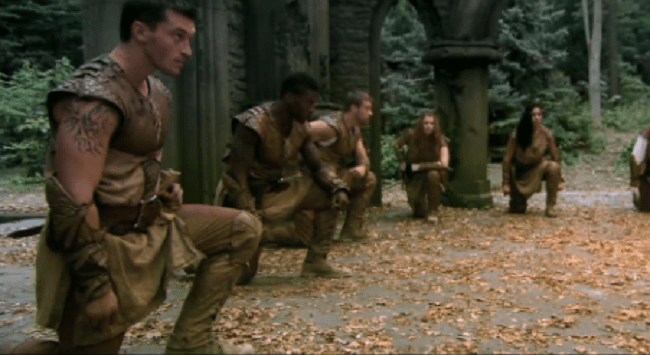