I am still completely stressed out from last night’s episode of  Extant. The bad guys got Ethan, John landed himself in JAIL and Grandpa Quinn forgot that babysitting is generally a whiskey-free activity.

The episode titled ‘Shelter’ should have been called “The one where everything goes wrong and then ends abruptly leaving you both surprised and unsettled by the realization that you’ve been watching from the edge of your seat for the last 20 minutes.” It starts with Molly, John and Ethan attempting to escape from Allan Sparks, who is trying to get Molly into quarantine in order to remove the baby the ISEA implanted in her while she was in space. The couple heads to Molly’s estranged father’s home, seeking temporary shelter and a place to perform a homemade DNA test. They still believe that the baby is the result of a fertility experiment and decide to rig some of Molly’s old science equipment to confirm the baby is in fact theirs. Molly’s father Quinn is immediately suspicious of their unplanned visit but doesn’t ask too many questions as he and Molly have had somewhat rocky past due to his drinking problem. He agrees to take Ethan off of their hands leaving Molly and John with a few hours to complete the test.

Meanwhile, the bad guy behind the ISEA, Yasumoto, visits a laboratory where scientists work on manufacturing a “life-sustaining” substance that kind of looks like honey. But it is not honey. So not-honey that it makes you bleed out from your eye balls until you DIE! Yasumoto is obviously pissed about this because he wanted a life sustaining formula, not a life-ending formula. He tells the remaining scientists to keep working on it, and hints that the missing link could be found in the embryo implanted in Molly. He instructs Allan to do whatever possible to get Molly into quarantine so they can test this hypothesis.

Ethan is now being called a humanic instead of a humanoid (I have no idea why, they didn’t feel the need to explain). As a humanic, he is apt to learn faster and more skillfully than humans. When Grandpa Quinn witnessed his ability to pick up useless activities like skipping rocks on the beach, he decided to take Ethan to a bar and teach him how to play rings, a bar game that involves throwing a ring on a hook on the wall (bar games have not advanced much in the distant future). Ethan picks this up very quickly and Quinn begins betting on his grandson with fellow patrons. Winning all of this cash gets gramps a little too excited and he takes a big shot of whiskey. I’m not the world’s best babysitter or anything but I’m pretty sure gambling and drinking hard liquor are high up on the “Things You Shouldn’t Do While Watching Other People’s Kids(/Robots) list.” Not surprisingly, Ethan goes missing and winds up in the hands of ISEA agents. John and Molly begin searching for him while Grandpa Quinn calls the police.

The agents proceed to throw Ethan on the ground, remove his battery pack thing and abandon his lifeless robot corpse in the woods. (WHAAAAT?!) This is the moment I began inching toward the edge of my seat, motivated by both intrigue and extreme guilt. I feel like I was somehow responsible for this. I’ve been making fun of the creepy robot kid since the pilot and now all I want to do is jump through the screen, restart his battery and give the little guy a bird to play with (see: kill).

The police don’t consider searching for a robot in the middle of the night a high priority and tell a panicked John that he will find his son in the morning. The cop makes a few robot jokes and an uncharacteristically emotional John winds up and punches the officer square in the jaw. This obviously results in a night spent in jail, rendering both John and Grandpa Quinn unable to continue searching for Ethan. (Dude, John, come on. There are really only two rules to follow as a grown up – wear clean underwear and don’t punch cops).

Molly eventually finds a still very lifeless looking Ethan but a helicopter hovers overhead and scoops them up. The next time we see Molly she’s in quarantine on a hospital bed and Ethan is no where to be found. (Poor Ethan. I hope there are lots of birds in robot heaven!)

She escapes from her bed only to wander into a room that looks kind of like a space-y version of Dexter’s kill room. Doctors begin to (presumably) remove the baby. A futuristic-looking laser makes an incision in her lower abdomen, the background music reaches a chilling climax and the screen flashes Extant. Boom. It’s over. A commercial for laundry detergent begins and I am left with not only the fear that one day there will be laser lights that cut through organs and flesh, but also that I am somehow responsible for the unfortunate fate of the creepy, completely fictional robot kid. 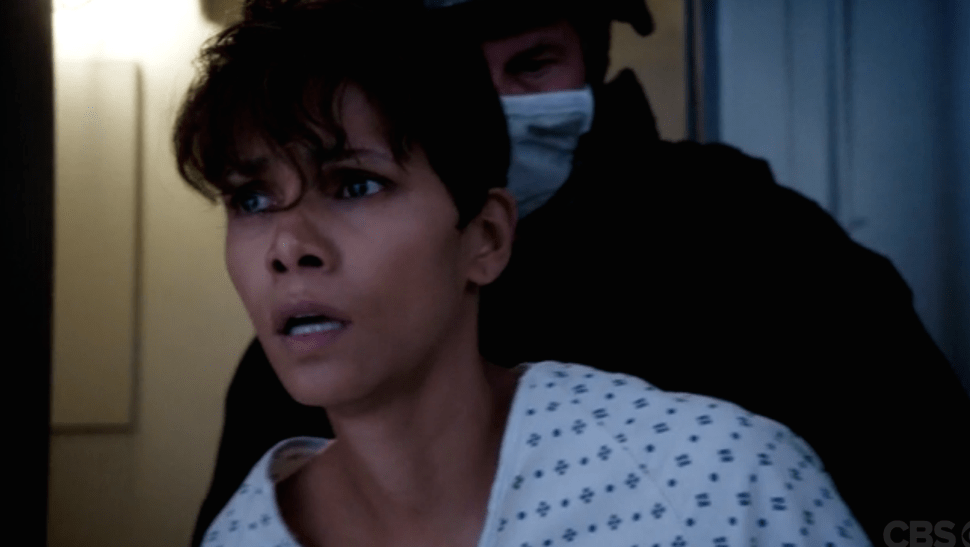