She’s good. Well, kind of. A few things have changed since last week’s episode of Extant, most noticeably is the fact that Molly has figured out a new way to style her asymmetrical pixie cut. Beyond taming her tresses, she has agreed to let John throw her a birthday party even though it’s not actually her birthday. If you recall, Molly was in space getting inexplicably  knocked up by the hallucination of her dead ex-boyfriend during her actual birthday so now that she’s back, she can have a proper party.

So, her hair is better, but she is still hiding the alien bun in her oven from her oh-so-adoring husband.Apparently Molly has some sort of disorder that makes her think that Harmon’s advice to not trust ANYONE actually means trust EVERYONE except your husband. Besides, John is too busy trying to socialize Ethan to notice. Humanoid Ethan is in a stage of his development where he needs to interact with humans outside of the home and lab so he can learn how to be more normal. Normal, that is, for a robot child.

Other than updating her look, Molly is taking better care of herself, getting some exercise and what not. While on a run she encounters her boss Alan, who quite convincingly lies to Molly, explaining that the ISEA did in fact impregnate her during a “blind test”. She was allegedly chosen for this experiment because she experienced difficulty trying to conceive with John in the past. He urges her to get checked out by the ISEA doctors because her brain abnormalities match Harmon’s. On the bright side, the ISEA used the embryos she and John created during their fertility treatments so, he tells her, the baby is in fact theirs. Molly listens intently, gives one of her now signature wide-eyed confused faces and storms off.

Meanwhile that creepy robot kid Ethan is still being creepy. John left his humanoid son alone for a few minutes under the condition that he follows the rules: don’t go outside. I have never personally been a parent to a human-like robot, but even I know they’re not to be trusted. Not surprisingly, the creepy robot kid sees a bird, and if you remember the pilot, birds are NOT SAFE around Ethan. Ethan, dressed like a 6 year old grandpa, nibbles a piece of dry toast while watching the unsuspecting bird from the kitchen (Note to self: never trust a 6 year old with a sweater vest and a no-fuss breakfast item). In an act of total robot recalcitrance, he makes the decision to disobey the rules and step outside. (Fly away, little birdy!) Ethan masterfully assembles a trap and captures the bird before his mother comes home to take him to school.

Once at school, Ethan is whisked away to the classroom, leaving John and Molly to address some of his classmate’s parent’s concerns. As you can imagine, these parents are weary because humanoids are relatively new and they’re concerned for their children’s safety (but judging by the way Ethan straight up decapitated that bird a few weeks ago, I’d say their concerns are completely merited). John assures these parents Ethan has passed empathy tests and is attending school in order to cultivate human experiences outside of the home and lab. Julie later explains, there’s no nature with Ethan, only nurture. Julie, by the way, is very worried about Ethan being subjected to ridicule and bullying. She is noticeably more maternal toward Ethan than Molly, who admits she has difficulty adjusting to having a humanoid as a son.

Later, Molly comes downstairs all dressed up for the birthday party and greets guests with her husband. She and John clink glasses, but when he walks away she tosses her drink in the sink. Her best friend Sam, still hoping to get to the bottom of this pregnancy, stops by with a kit to do blood work on Molly. In the future, drawing blood will involve a device that looks like a pen, and lights up blue when it draws the blood sample. Goodie. (ed. note: wait, so like, a vaporizer?)

After taking a blood sample, Molly experiences sharp pains in her stomach and that mysterious symbol of entwined circles emerges from her wrist (Gross). Her eyes close in pain and when they open Marcus is (of course) standing before her assuring her ONCE AGAIN that “It’s okay.” She eventually returns to the party where she runs in to Tim, Marcus’ brother, who she hasn’t seen in 8 years. The two reminisce about Marcus while touring John’s robot workshop in the garage. They exchange sentiments while surrounded by hanging robot appendages, and admit that they both have visions of Marcus. He tells her it’s normal and believes it’s Marcus’ way of sending messages from the grave. Later, the whole party poses for a group photo and Molly gestures for Tim to come stand next to her.

When the power goes out during the party, John heads down stairs to flip the circuit and he finds a rumbling box, housing the bird that Ethan captured earlier. He scolds Ethan for disobeying the rules and going outside. Ethan diffuses the reprehension by admitting that Molly has a secret. John confronts Molly about all of her recent secrecy until finally, she blurts out that she’s pregnant. She explains that the ISEA experimented on her without her consent. Because John seems to operate on a Panglossian level of optimism, he believes her and is thrilled.

The now happy couple returns to the party and Molly notices that Tim is no longer there. John looks at her like she nuts, because hi, she is. “But the picture!” she reasons, only to find that Tim does not appear in the photo they took earlier. You see, Tim was a hallucination, and the realization that she spent the entire evening speaking to someone who wasn’t there convinces her to take Alan up on his offer to get professional help. She agrees to let the ISEA study her and a car quickly comes to pick her up.

Back at the lab with Molly’s blood sample, Sam comes face to face with the bad guys and quickly sends a text to Molly: “Get out of the car!” This prompts Molly to wrestle the driver and jump out of the car (I’m no doctor but I don’t think a pregnant woman should do either of those things.) After receiving a call from Sam, John follows in his car. The two meet and stare at each other for a while with matching wide-eyed expressions.

Alan, ticked that she’s making things so difficult, organizes a SWAT team and kicks down the door of Molly and John’s home! The team frantically searches the house only to find that…wait for it…“They’re gone.” 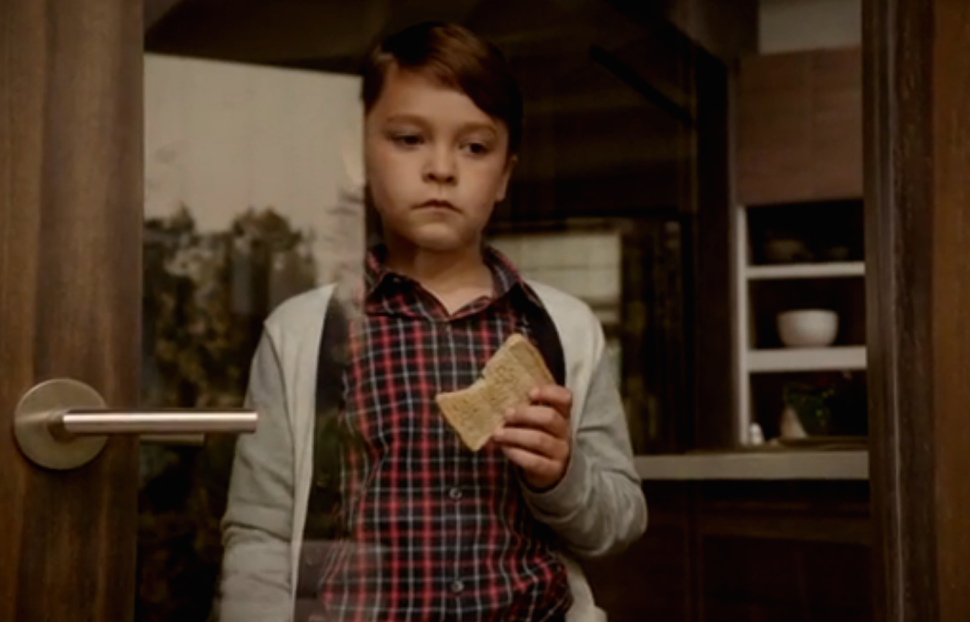