Here is a lesson the second episode of Extant, titled ‘Extinct,’ taught me: When your not-dead-after-all colleague Harmon Kryger returns and says “don’t trust anyone”, he means don’t trust anyone. Like, anyone, anyone.

Apparently Molly Woods has a hard time understanding this concept, as exemplified (over and over) in this episode. As we know, Molly is the real life mother of the humanoid Ethan, created as an experiment by her husband John AND expecting a mysteriously conceived alien baby. So far, she and her doctor/best friend Sam are the only ones who know about this inexplicable pregnancy.

The Big Bang: Before leaving for work, John and Molly plan to meet for a romantic lunch later in the afternoon to properly celebrate her homecoming. Still secretly pregnant, Molly pretends to like the smell of the coffee he’s prepared, but abandons the cup the minute he leaves for work. She proceeds to make Ethan’s breakfast, showing us that in the future, eggs will be able to stand upright on the counter (Coooool and totally useful).

Later, Molly hears a booming noise coming from the other room. She moves cautiously in the direction of the noise only to come face to face with her dead ex-boyfriend, Marcus. She is alarmed but, because Marcus apparently only knows how to say “it’s okay”, he assures her it’s okay. Then Molly experiences abdominal pain and passes out, revealing a weird symbol rising from her lower abdomen. Ethan hears her fall and rushes into the room. He stands watching her for a moment, examining the symbol but doesn’t mention it when she comes to. He then asks her if she’s okay. Seriously, as much as everyone is concerned with being okay on this show, I’ve seen two episodes and I can already tell you, basically nothing is okay!

That afternoon, Ethan and Molly go to the Natural History Museum. Molly loses sight of Ethan because she’s too busy spilling her guts to Sam. (Um, Molly, what happened to not trusting anyone??) She confesses that she saw Marcus and fears he is somehow responsible for the pregnancy. Sam explains that Marcus was likely a hallucination resulting from the – and I quote – “brain abnormalities” detected during Molly and Hamon’s physicals. Suspicious that her boss, Alan Sparks, could be behind this, Molly questions whether she is actually pregnant. Sam brushes the accusation off, insisting Alan would never do such a thing.To prove to Molly that she is in fact knocked up, she promises to find a place “off the radar” to do an ultrasound.

Meanwhile, Ethan encounters a more-traditional looking robot by the Neanderthal exhibit, who explains Natural Selection and defines extinition as something that happens to the “weaker” species. Creepy Ethan’s eyes widen in an almost sociopathic understanding that as a humanoid, he could be stronger than the human species. Molly finds Ethan talking to the robot and scolds him for running off. She agrees not to tell his father that he misbehaved if he will keep her fainting a secret as well. (Advice for Molly: Don’t trust the robot kid that calmly decapitated a bird in the last episode!)

Quantum Entanglement: Two more people Molly probably shouldn’t trust are John and Julie, who totally hooked up while Molly was away in space. No one actually said that, but judging by the awkward moment that occurs right after Molly thanks Julie for keeping her husband company, you can kind of put two and two together.

Julie clearly has feelings for John, but now that Molly is back on Earth he is seemingly devoted to his wife (arranging those romantic lunches and whatnot). We’ll see how long that lasts when Molly finally reveals to her husband that she is carrying a surprisingly normal looking 14 week old fetus.

Normal in that it didn’t appear to be alien, but that could just be because it was seen on an ultrasound machine typically used for dogs. And when I say typically, I mean always used for dogs because Sam took Molly to THE POUND to perform the ultrasound in an attempt to keep Molly’s pregnancy on the DL.

Not surprisingly, the attempt to conceal the ultrasound from Molly’s employers was pretty much a waste of time. Molly, armed with the knowledge that she and Harmon share the exact same brain abnormalities and certain that this pregnancy is the result of an experiment, immediately informs Alan that she is preggers and demands answers. She must not have been listening when Harmon said “don’t tell anyone anything!”

Escape Velocity: Flash back to the permanently sweaty Harmon during his solo mission in space. Everything appears to be normal as he floats through the space craft, pulling levers and pushing buttons as astronauts do, when he suddenly encounters his dead mother – crazy eyed, wearing a robe and also pretty sweaty. She is creepily standing behind the same oculus window where Marcus first appeared to Molly. Harmon’s encounter with his mother is not as welcomed as Molly’s, but it was just as creepy.

He immediately barricades the door, only to find that his alien-ghost mother can pass through walls, because duh, she’s a hallucination. Panicked – and even more sweaty than usual – he finds a way to corner her and quickly makes the decision to literally FLUSH his mom out of the spacecraft. His lower lip quivers as he jettisons his shuddersome mother into outer space. Hamon looks longingly after her, trembling and crying (though it is possible that I’m confusing those tears with the excessive amounts of ever-present sweat).

Later, Molly reviews the surveillance footage and realizes that Harmon is also seeing dead people. The two meet in secret and conclude this is the result of their identical brain abnormalities and that Alan is probably behind this.

Dark Matter: Yasumoto, financier of John and Julie’s fancy new lab, is also not to be trusted (because NO ONE is to be trusted). But this time, it’s John who should watch his back. The two-faced Yasumoto feigns support and gives copious amounts of money to fund John’s humanoid research, but meets in secret with Alan. Alan shares the news of Molly’s pregnancy with Yasumoto, who adds that Alan’s daughter Katie, is somehow responsible. How she is responsible for knocking up Molly is perplexing. Also, Yasumoto is boinking one of his employees, Femi Dodd, so that is equally perplexing in a whole different way.

The episode ends with John, who is completely oblivious that his boss is scheming against him with his wife’s boss AND that his wife is pregnant with not-his-baby, waiting for Molly at the romantic lunch he’s planned. When she doesn’t show, he is upset but chalks it up to the fact that she’s adjusting to being back on Earth. If he only knew… 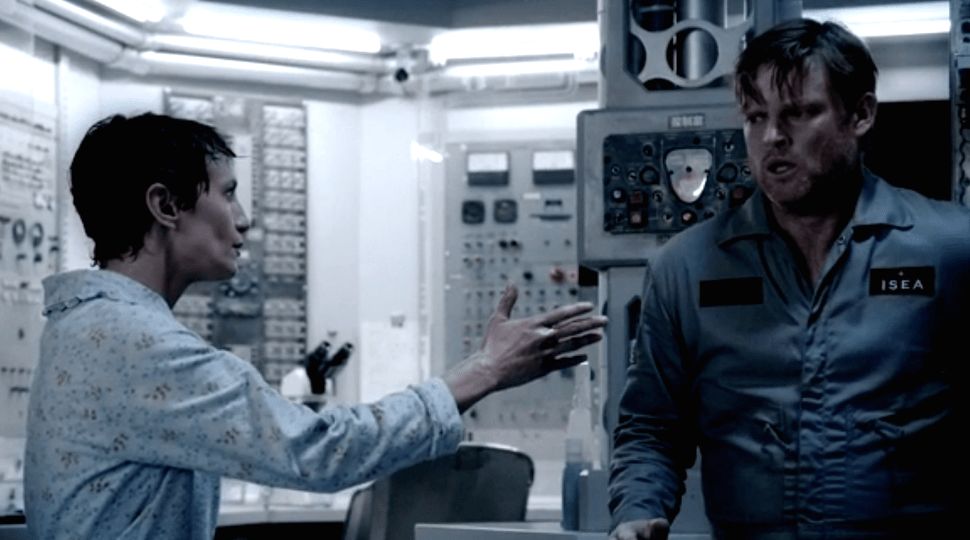