Extant, a drama that is a mix between Gravity and I Didn’t Know I was Pregnant, premiered on CBS last night. Produced by Steven Spielberg and starring Oscar winner Halle Berry, the show is part of a growing trend of big screen talent moving to the small screen. Being a fan of both Spielberg and Berry, I made a night of the premiere, pulling out my fuzzy socks and ordering a pizza. The next hour of my life went something like this:

The show opens with Molly Woods (Halle Berry) suffering from what we already from the many promo commercials, is morning sickness. A child with big blue eyes and a mop of brown locks, looks on the from the doorway and expresses concern. He calls her “mom” but this is immediately distracting because he doesn’t look anything like her. Is he adopted? Is it sloppy casting? Do I have anymore pizza?

Molly assures him she is simply “readjusting” to life on Earth. You see, she has recently returned from a 13 month solo mission in space. Yes, space. Soon after we are introduced to her husband John Woods (Goran Visnjic, AKA your mom’s favorite dude from ER) and realize the kid looks a lot like him. Perhaps it’s his child from another marriage? The family then attends a BBQ with Molly’s friend Camryn (played by actress Sam Barton) and we get a glimpse into this futuristic world they live in. This is indicated by all of the high-tech cars, glowing trash compactors and the fact that going on a 13 month solo mission is totally normal for a suburban mother. After the not terribly exciting BBQ, John puts their son Ethan to bed, which seems standard until Ethan calmly says, “I think I need a flip.” A what? I put down my pizza. He then proceeds to roll over and his father opens a compartment in his back exposing that Ethan is a robot. With a battery…in his back….that is apparently routinely “flipped” in order to keep him up and running. No wonder he doesn’t look like his mother, he’s not a human. Now things make sense.

Meanwhile, Molly is in the dining room scrolling nostalgically through a moving photo album (ooooo, future-y). The photos are of her and, what one can only assume, is her ex-boyfriend Marcus (but I just found out her kid is a robot so I’m not sure I can assume anything). John sits down next to his wife and they proceed to have what was supposed to be a sweet conversation between married people about how they were destined to be together but there is zero chemistry between them. Then there’s a shower scene….and yikes, it’s all awkward-slow-dramatic-soft kissing that is almost enough to put me off my pizza. Bleh.

The next morning John and his mini-me robot of a son step out a car that looks kind of like the love child between the Batmobile and a Toyota Prius, and greet Meriyl Streep’s daughter. I mean Julie Gelineau, John’s business partner and someone he is totally going to hook up with when he finds out about his wife’s mysterious pregnancy. The three walk into the building where John will give a TedTalk-esque speech to potential sponsors about investing in robot technology. He stops to remind his robot son that “You exist just like me”. Except he’s battery powered. The investors express concern that robots will become too powerful and eventually take over the world. One woman adds that robots do not have souls and therefore can not replace children. A heated exchange ensues. What is the soul? What happens to the soul? Does it even exist? Is it just me or this show asking more existential questions than an episode of Super Soul Sunday?

Meanwhile, Molly gets a physical and learns that she is pregnant. Shocking. She gives her best surprised face and proceeds to act confused. This pregnancy is particularly perplexing because not only was she solo on this mission to space but she has also had fertility issues in the past.

She begs Camryn, who is apparently also her doctor, not tell anyone until she figures out how this apparent immaculate conception has occurred. After receiving the news she wanders through a corridor, stopping to stare at a picture of Harmon Kryger, a colleague that has recently passed away. A higher-up in her company finds her looking at the picture (awkward) and leads her into his office where he and another serious looking man proceed to ask her about an undocumented period of time during her mission. Molly confesses she accidentally deleted the video surveillance. Cue the comically bad flashback… Molly, on the set of Gravity…I mean, in space, is pushing important-looking buttons and floating through the corridors, when suddenly she sees her supposedly dead ex-boyfriend through a foggy window. She gives a really convincing alarmed face… They stare at each other for a long time. And then he dramatically writes “HELP ME” on the window. Is he dead? Is he not dead? Is the father of her baby? Is he an alien? A ghost? Seriously, is there any pizza left?

After the presentation John walks into a lab where a nearly nude guy, Hideki Yasumoto, is lying on a table covered in some sort of fluid. After a shower, Yasumoto and John talk robot investing but I can’t really tell you what happened here because I was distracted by all of the blatant racial stereotyping.

Thank you, Extant, I now fully understand that Hideki Yasumoto’s character is Asian.

Flash back to the space ship flashback: Molly’s ex-boyfriend Marcus opens the door and slowly approaches her. She encourages him by saying “You need help?” “Help” he repeats robotically as he slowly walks towards her. Wait is he a robot too? I thought he was a ghost? He then very creepily extends his hand and reaches for her face. We are then exposed to what might the most unbelievably uncomfortable moment in television history. It was pretty much this picture, but for an excruciatingly long period of time.

The music reaches a dramatic climax and sharply cuts to commercial. Ok, no more pizza for me. Yuck.

Soon after we see Molly, still in space, reviewing the video footage only to find that Marcus was not there. The video is just her and she freaks out. Frantic, she purposefully deletes the tape. Which is annoying because I totally wanted to see if Marcus was the baby’s father…

The show concludes with Molly and her kid robot strolling the park with ice cream cones. And then, because I think the writers of show had just seen the 2006 remake of The Omen, the robot kid uncharacteristically throws a fit and runs away into the woods. Molly jettisons her ice cream cone and runs after him only to find him standing next to a headless bird. “It was like this when I found it.” he says stoically, “Your hair looks pretty today.” Molly just stares at him with yet another wide-eyed expression indicating shock and concern. Later that evening, Molly is taking out the super-high tech trash again (I think the writers were really proud of this idea), when she hears a rustling in the bushes. She indicates concern with her dow-eyed stare and out pops her not-dead-after-all colleague, Harmon Kryger. He quickly tells her that he is not dead – hi, duh – warns her not to trust anyone, and runs back into the bushes. Molly looks confused and the show ends with previews of next week’s episode. From what I can tell, the kid gets creepier, and there are more warnings not trust anyone, so there’s that to look forward to. 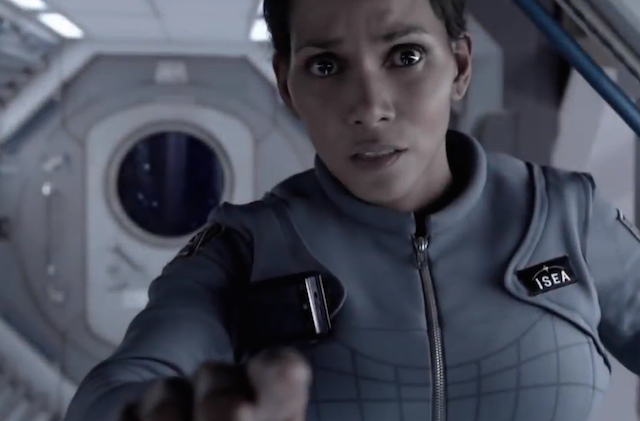