For Carmen Ojeda — whose daughter died of an asthma attack after a police officer who pulled her over en route to the hospital allegedly told her he “didn’t do CPR” — watching the video of Eric Garner’s struggle with police brought her back to her own tragedy.

“I was screaming. I was crying. I feel like I failed — because I’ve been trying to do this for the last four years,” Ms. Ojeda said, referring to her push of “Briana’s Law,” a bill that would require NYPD officers to be re-trained in CPR every two years.

“That’s what my daughter told her: ‘Mommy, I can’t breathe,’” Briana’s father, Michael Ojeda, said of his 11-year-old daughter, who died in 2010 when the family finally reached the hospital.

The Ojedas held a small rally in front of Brooklyn Borough Hall to call for passage of the bill — which made it through the Assembly last session, where it was sponsored by Assemblyman Felix Ortiz, but stalled in the State Senate. They also called for Gov. Andrew Cuomo to look into signing an executive order to mandate CPR re-training.

The issue of police using CPR is back in the news after the death of Eric Garner in NYPD custody. Video shows an officer, identified as Daniel Pantaleo, using an apparent chokehold to bring the asthmatic Mr. Garner to the ground as he repeatedly says he cannot breathe. Another video posted online this weekend shows minutes passing by while officers do nothing to resuscitate him — with one officer telling a bystander CPR isn’t being performed because Mr. Garner is breathing.

“It’s an outrage that our police officers are able to use so much aggression and not know how to save a life — but they know how to kill a life. It’s inhumane,” Ms. Ojeda said said.

The video also shows Mr. Pantaleo waving at the camera, an action that reminded the Ojedas of the bad attitude the officer who stopped Ms. Ojeda on the way to the hospital — she recalled him smirking at her as he daughter struggled to breathe.

“They show that they have no respect for us,” Mr. Ojeda said of the actions caught on video. “The test for the police officers should be some kind of different test — they should have to do some kind of moral test. It’s not just read a book and do it. That’s not a cop — a cop is somebody who cares.”

Mr. Ortiz, the assemblyman, said his mind went to Briana’s death “very quick” when he saw the video of Mr. Garner.

“I was completely dismayed and disappointed that we didn’t mandate CPR,” he said.

With the attention on Mr. Garner’s death, Mr. Ortiz said, “We hope that the Senate and the governor will take this issue more seriously.”

Four years after her daughter’s death, the Ojedas believe the proposed law could have saved Mr. Garner’s life.

“They call it a no-brainer,” Mr. Ojeda said of lawmakers backing the bill. “But four years later, the no-brainer’s still not done.” 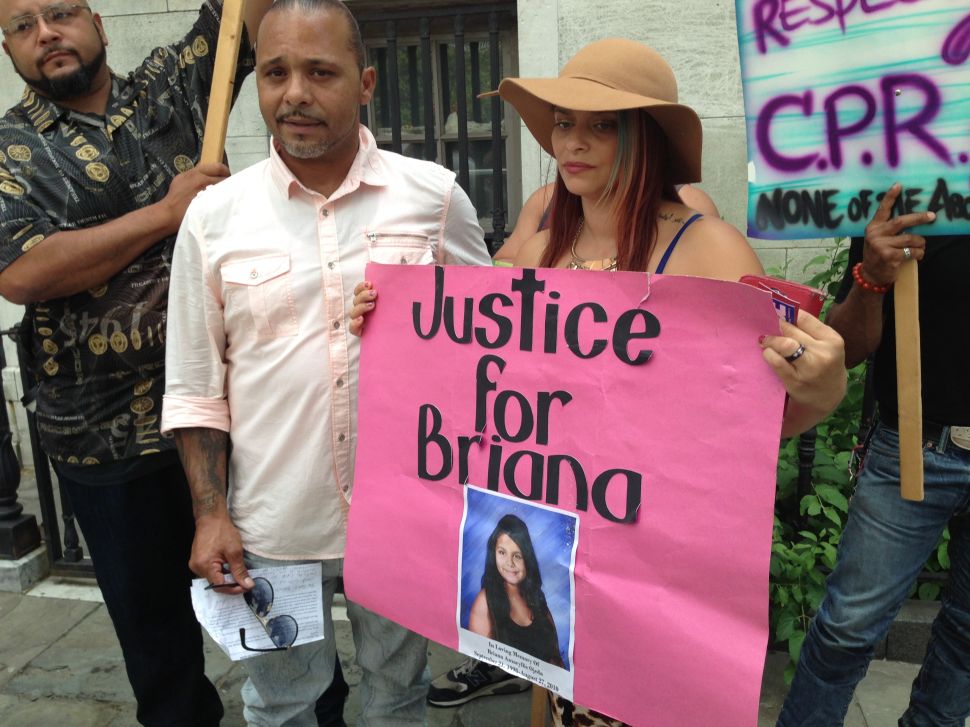