New Jersey Governor Christie barnstormed his way through Iowa like he was playing the role of Harold Hill in the old Broadway musical “The Music Man,” hoping for the applause of the crowds in the key presidential primary state. In places like Davenport and Marion, Christie played the tune heard often when practicing classic retail politics, the notes welcoming to the ears of those looking for a look-see at the potential Republican presidential candidate in 2016.

“These people in the press who ask me, “Do people in Iowa love you, governor?” Christie said according to a report in The Record on Thursday, before waving what has been for him a national GOP fundraising wand, in this case for Iowa Republicans. “And you know. Heck, I don’t know. We just met. But the early indications are good.”

Meanwhile, on the same day in the leafy streets of bellwether Bergen County, former Secretary of State and U.S. Senator Hillary Clinton (D-NY), seen by many as the potential Democratic frontrunner in 2016, descended into the basement of a Ridgewood bookstore and into the arms of her supporters. Hundreds inside and outside the store chanted “Hillary” in the same type of cadence that fictional boxer Rocky Balboa might have heard in South Philly in 1976.

Clinton did not speak to the press while she signed copies of her latest book, “Hard Choices.” But one New Jersey voter spoke for many in the room at the event.

“I think Hillary can beat Chris Christie in this state because of all of the controversies he is experiencing. I think Christie did well with Hurricane Sandy, but once that bridge scandal hit, I think people fell in love with Hillary all over again,” Jillian Urban, a 20-year old pre-med college student from Paramus told PolitickerNJ.com, referencing the ongoing investigation into the George Washington Bridge access lane closures last year, also known as the Bridgegate scandal. “I think if she can win New Jersey over Chris Christie, she can do pretty well overall.”

Going in to the latest pre-presidential skirmish, Clinton had reason to feel stronger knowing that the one of the most progressive members of the Democratic Party in New Jersey, State Senate Majority Leader Loretta Weinberg (D-37), was now firmly in her corner, unlike her 2008 stance when she sided   with Barack Obama in that year’s Democratic presidential primaries.

“[Clinton’s] foreign policy experience will stand her in good stead,” Weinberg told PolitickerNJ.com, in reference to Clinton’s service as America’s chief diplomat from January 2009 to February 2013. “Based on what I know today, I’d be very happy to support her for president.”

Christie’s support among national conservatives could be growing, particularly in light of his considerable ability to raise funds for GOP candidates around the nation as he travels seeking support for a presidential bid, as well as his recent veto of a proposed 10-round limit gun control bill. But at home in New Jersey, Christie remains beleaguered by investigations into last year’s George Washington Bridge access lane closures, also know as the Bridgegate scandal. In many ways, Christie is driving his administration around the track cautiously under a yellow flag, enjoying the at-large escapes of pre-presidential campaigning while he has trouble at home, including seemingly being as able to raise as much money for New Jersey GOP candidates.

The Verdict: No Decision

To borrow part of line from William Shakespeare’s Macbeth, so far the hoped-for by many 2016 presidential campaign war to even the score between Christie and Clinton is full of sound and fury, signifying nothing. Neither Clinton nor Christie has officially entered the race. And until they finally enter the ring, any rhetorical punches thrown now are merely shadowboxing. 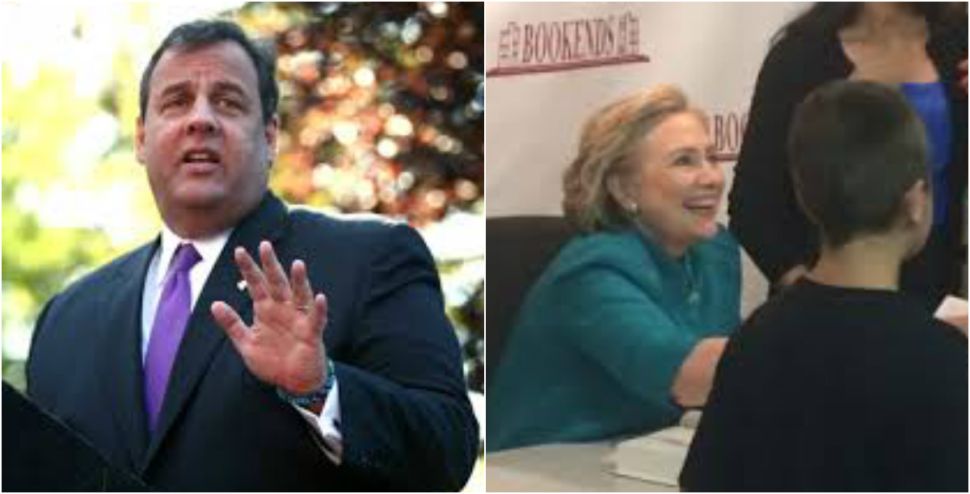