Filip Markiewicz, 34, has been selected to represent Luxembourg at the 2015 Venice Biennale, reports ARTINFO. The announcement was made by the Luxembourg’s Culture Ministry on Monday night. Mr. Markiewicz’s project “Paradiso Lussemburgo” was chosen from 17 proposals by a jury of five: Muhka director Bart de Baere, artist Martine Feipel, curator Paul di Felice, representatives from the Culture Ministry Claudine Hemmer, and Enrico Lunghi, the director of Luxembourg’s modern art museum, Mudam.

Mr. Markiewicz, who operates out of Luxembourg and Hamburg, works in mediums from video to drawing and has pieces in the permanent collection of Mudam. Several of his drawings are of bank notes that he redesigns to make political statements. In 2008, he presented Pale Exploding Imitation with videographer Bruce Geduldig, a performance at the Luxembourg Philharmonic based on The Velvet Underground’s debut album, The Velvet Underground & Nico. “Paradiso Lussemburgo” merges drawing, installation, video, and performance. It will show at the Cà del Duca, and Mudam will curate. 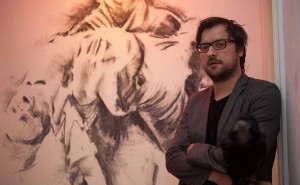