Manhattan Borough President Gale Brewer wants to put an end to “poor doors” and she wants to do it now.

“We are here to discuss a very troubling trend in the construction of new condominium buildings,” Ms. Brewer said this morning in City Hall. “It has come to my attention that developers are abusing an option left over in the inclusionary housing zoning text to create segregated buildings, often known as two-door buildings.”

Ms. Brewer, a former Upper West Side lawmaker, is frustrated about what is occurring at a development on the Upper West Side, where affordable units will be segregated into one section of a new building, 40 Riverside Boulevard, and market-rate condos in the other. Construction on the building began during the Bloomberg administration.

“In 2007 the state of New York modified the 4218 program so developers could only access the program’s tax benefits if they provided the affordable housing on site. But the city didn’t amend the local inclusionary housing program to fully effectuate that change” Ms. Brewer explained. “It was a mistake, but as a city we can rectify it. Changes can and must me made to the city’s inclusionary housing program to stop developers for segregating and segmenting buildings.”

Ms. Brewer said the “poor door system” was an affront to Manhattan’s values. She said she was working with City Council on legislation that would eliminate the loopholes in the inclusionary housing regulation and put an end to the “poor door” system.

“The two-door system, or creating a poor-door system as some media have coined it, is an affront to New Yorker’s belief in fairness and diversity” she said. “Creating a two-tier system in a development that is receiving tax benefits is offensive.”

“It’s the 21st century, its New York city, developers who decide to accept this money from the state, absolutely, their feet must be held to the fire to ensure that all residents are going through the exact same door. Developers and the city have no excuse” Ms. Rosenthal said.

Public Advocate Tish James, also present at the event, criticized Mayor Bill de Blasio’s stance on this issue, a rare move for her.

“This administration vowed to look at the zoning laws but the mayor’s housing plan says that it will continue to allow this kind of segregation which we as a society abhor. And his plan falls far short of the recommendations of the American Planning Association which urge the mayor, in a January 1st letter, to change the zoning laws,” she said.

A spokesman for Mr. de Blasio laid the blame on ex-Mayor Michael Bloomberg.

“This specific project was given a green light by the previous administration and had multiple stories already built by the time we walked in the door. The previous administration changed the law to enable this kind of development,” the spokesman, Wiley Norvell, said. “We fundamentally disagree with that approach, and we are in the process of changing it to reflect our values and priorities. We want to make sure future affordable housing projects treat all families equitably.” 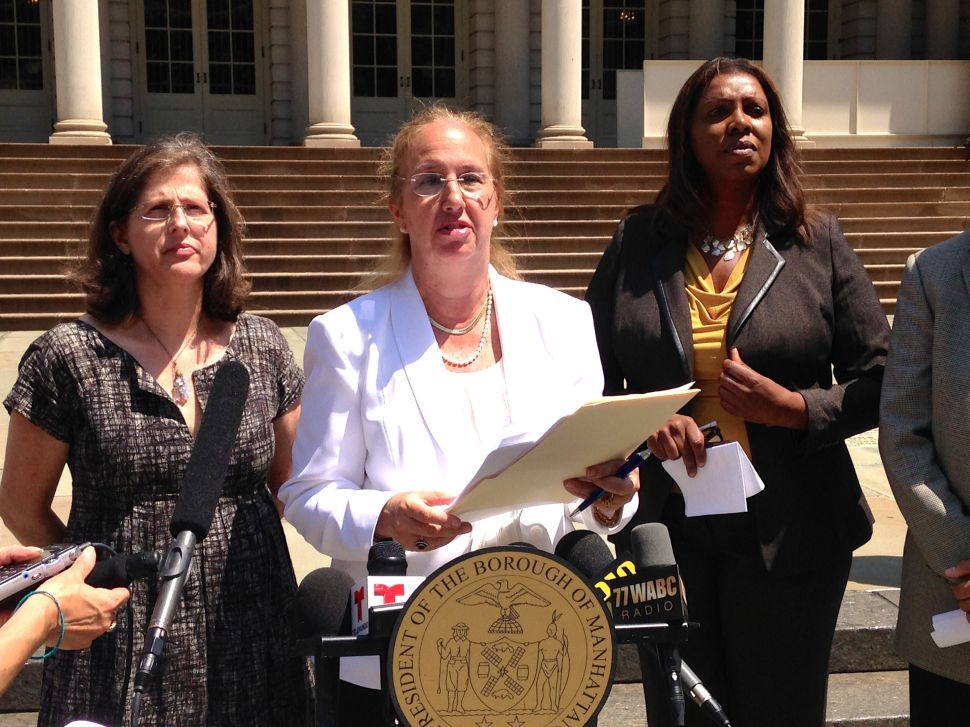