As the stars of Marvel’s newest offering, Guardians of the Galaxy, filed one by one into an advanced screening hosted by the Cinema Society with Men’s Fitness and FIJI Water at the Crosby Street Hotel, I couldn’t help but notice that each one was, in their own way, eerily reminiscent of their Marvel universe counterpart. This, despite the fact that their Marvel universe counterparts happen to be from outer space.

First you have Lee Pace, best known for Hobbit films and the AMC series Halt and Catch Fire. Mr. Pace plays the hulking villain Ronan the Accuser, and while the actor doesn’t share his character’s affinity for smashing heads with hammers, he does have Ronan’s build. Standing easily six inches above me, the actor isn’t hard to pick out of the crowd. Ironically, however, Mr. Pace originally auditioned for the quick-witted lead, Peter Quill, AKA Star-Lord. While not quite right for the part, Mr. Pace stayed on the project due to an immediate bond with director James Gunn.

“I hadn’t really read the entire script, I had only read a little bit of the script but I flew out to L.A to read for Star-Lord,” Mr. Pace told me. “Ultimately, I’m obviously not right for that character, but I hit it off with James. Thank God he thought about me for this one, because I had the best time playing Ronan the Accuser. Ronan is this fascinating, complicated beast of an alien.”

With his latest role, Mr. Pace adds another layer to his pantheon of fandom (fantheon?). He already has roles in such frenzy-inducing franchises like Lord of the Rings and Twilight. With Marvel on his resume, it’s possible the actor has achieved the Comic-Con holy trinity. When I asked him which franchise brings the most crazy, he could only laugh.

Then you have Zoe Saldana, who plays the alien assassin/human weapon Gamora. Ms. Saldana shares the coy, slinky sexiness of her character, with all of the charm. Unlike Mr. Pace, however, I can’t say Ms. Saldana has the look down, mostly because Gamora happens to be green. For what it’s worth, Ms. Saldana is no stranger to changing the color of her complexion. She’s already been bright blue in the bajillion dollar earning Avatar, but the process for Guardians was different, if not more taxing.

“For Avatar I barely even wore a costume because we did motion capture,” Ms. Saldana said. “This time with the costumes … [costume designer] Alexandra Byrne and I, along with the other actors in the movie, we worked hand in hand. We were always compromising and it was a lovely experience.”

That’s not to say there weren’t any complications.

“There were certain issues, with certain things rising where they shouldn’t be, so we sort of kept an eye on that,” Ms. Saldana told the press.

Finally, you have Chris Pratt, who more than all of his co-stars reminded me of his on-screen role. Peter Quill, who goes by the self-styled nick-name Starlord, is quick-witted and perhaps too charming for his own good, but likable enough where you can’t help but forgive him. So too is Mr. Pratt, who enters the room looking nothing like his pudgier Parks and Recreation character Andy Dwyer. When someone asks him who he is wearing (a strangely out of place question for a screening of a Marvel movie about aliens and spaceships), Mr. Pratt responds “I’m wearing a skin suit whose name used to be Chris Pratt, I tried him on about eight months ago and he was a little too big for me when I first started.”

But even more so then bringing his weight down and his bulk up Mr. Pratt embodied the role of Peter Quill entirely. Fielding questions left and right, Mr. Pratt answered every query with a wink-wink, in-on-the-joke attitude. It wouldn’t shock me if people had a hard time separating character from actor, and that is just fine to Mr. Pratt.

“I’m going to be Star-Lord, and when people think of the character they are going to think of the way I played him,” Mr. Pratt told the mob of reporters. “And that makes me feel pretty happy.”

When I finally got a chance to grab Mr. Pratt away from the scrum, I asked him how much of his Star-Lord-like attitude was actually Mr. Pratt being himself. He winked and patted my arm in a way that Peter Quill would be proud of and said “Oh, I’d say I’m about 99 percent Star-Lord.” With that he was off.

What about Vin Diesel, you ask, the fourth and final Guardians star to arrive to the screening? Mr. Diesel is truly a presence, with a vibrant personality to match his physical width. But Mr. Diesel, short on time due to scheduling issues, did very brief interviews that were eventually cut short. Mr. Diesel was, at least for tonight, a man of few words. Appropriately, Mr. Diesel plays Groot, a walking tree that gets by on its presence because Groot can only say the words “I am Groot.” Truly, a  tree of few words. 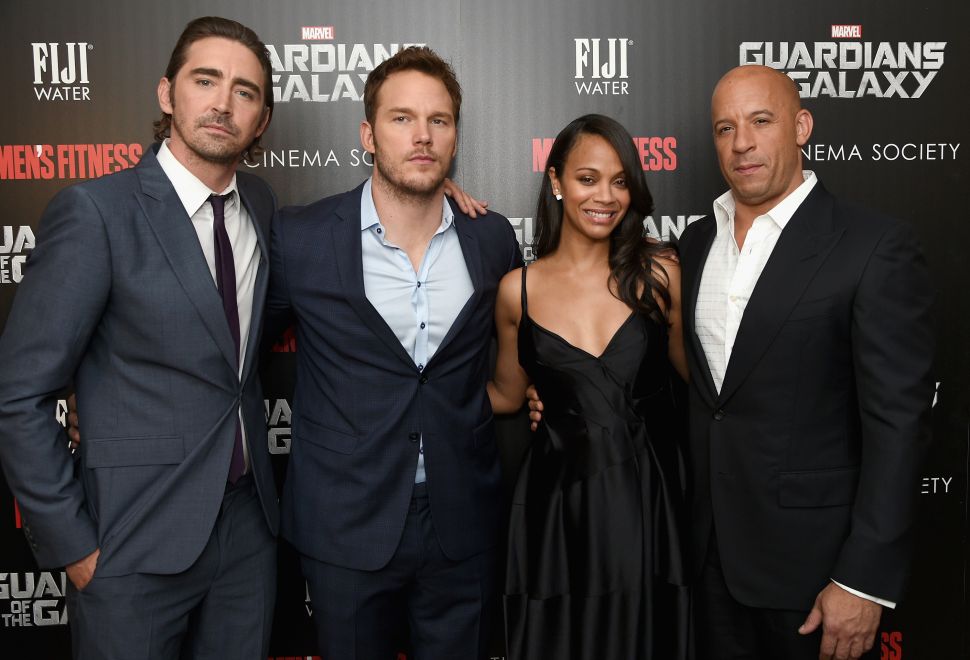